Patrolmen’s Benevolent Association President Patrick Lynch fired a number shots against just about everyone in New York City in the wake of an NYPD officer violently assaulting retired tennis star James Blake in Manhattan. At first, he sent a letter to reporters about publicizing the incident, mocking the fact they don’t have dangerous jobs (which isn’t true for many reporters, especially those who work in war zones) and that only cops can judge other cops (which, at best, is a perverse understanding of the American judicial system). He also called the outrage against the tackling of an innocent man, widely assumed to be misidentified because of his blackness alone, “un-American,” as if he were trying out for the role of a frothing Joe McCarthy in a post-Soviet world.

On the one hand, in isolation, Mr. Lynch’s temper tantrum can be explained by his job: As a PBA boss, he’s mandated to defend his members no matter what. Another is that in order to maintain political support (he was re-elected this year in a contested election) he has to tell cops what they want to hear, no matter how much that offends the public. And that’s precisely the problem. His condescending and bullying outbursts aren’t just his personal foibles, but they represent the mindset of the 30,000 armed troops on the ground, a serious attitude problem that needs to change.

For a lot of criminal justice reform activists, the outrage in the Blake affair is a slap in the face to their work.

First, let’s get one thing out of the way. The Blake incident is getting the attention not just from the media but from City Hall and 1 Police Plaza because of who he is, a famous and wealthy athlete. But he’s the victim of a system that has terrorized many other people who come from the shadows, the working class and the poor. Shop-owner Eric Garner was strangled to death on the street for selling untaxed cigarettes. Akai Gurley and Tim Stansbury, both unarmed and committing no crimes, were killed in public housing complexes because their existences startled a jittery officer. Liberian immigrant Amadou Diallo died in a hail of gunfire, because he tried to identify himself to police.

Put that in the context of the fact that the Comptroller’s office reported in August that the city paid $217 million in one year for in settlements for police excess cases, the most for any city agency. The Blake affair really is just a speck on that radar, and since that settlement money comes out the general budget rather than the NYPD coffers, cops never really feel the pinch for their misdeeds.

For a lot of criminal justice reform activists, the outrage in the Blake affair is a slap in the face to their work. For decades they’ve been trying to raise awareness, but only when a wealthy celebrity feels the brunt of the a department out of control do people in power feel obliged to listen. That’s understandable, but as unfair as that seems, the situation is putting pressure on Mayor Bill de Blasio, who tends to give deference to his tough-on-crime and data-obsessed police commissioner, Bill Bratton. For better or worse, this is a moment beleaguered cop reform activists can seize.

Hence why Mr. Lynch’s outburst is so telling, since he knows the change could actually be on the way. Indeed, Mr Lynch has spoken out against the use of body cameras, requirements for cops to disclose who they are to citizens, the creation of an inspector general and the use of a special prosecutor in police excess cases. Mr. Lynch has even gone on the offensive when de Blasio has tried to extend an olive branch. When the mayor including hiring more than 1,000 cops the commissioner as for in the budget this year, Mr. Lynch denounced it as a drop in the bucket.

We need all of that oversight, and what we also need is a system whereby settlements for police excess come out of police budgets, so commanders will be forced to instill a sense of discipline on the ground.

So it’s not really a surprise that Mr. Lynch has chosen to inflame the rhetoric, especially by playing the victim, playing into the myth of the “war on cops.” It will take destroying that myth in order to force through real change, and doing so isn’t terribly hard to do. As a brilliant op-ed from an Iraq vet and current police cadet explained, cop killings are at a 20 year low and according to the US Bureau of Labor Statistics the fatality rate for law enforcement officers is lower than for construction workers and farmers. And according to the National Law Enforcement Officers Memorial Fund, more officers are killed in traffic and “horse related” accidents than by gun shots.

Even if skepticism of both NYPD practices increases and the PBA’s cries of victimhood, don’t expect for Mr. Lynch to meet the mayor or criminal justice reform activists even a quarter of the way, but that’s not really the point. The point is to marginalize Mr. Lynch’s nonsense, because it has no place in a rational debate. Fortunately, Mr. Lynch’s public celebration of an officer with a checkered past who assaulted Mr. Blake for minding his own business helps in that effort. 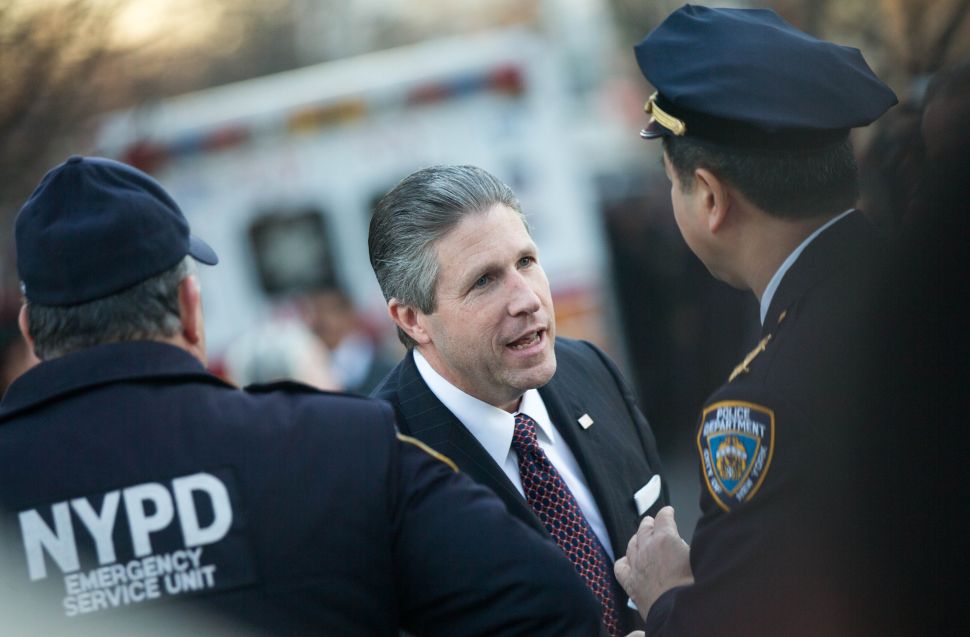