Mayor Bill de Blasio slapped back at the Transit Workers Union today over an ad attacking him for refusing to give in to a state demand that the city pay $3.2 billion into the Metropolitan Transportation Authority.

The mayor reiterated that he had no intention of pitching in the funds MTA Chairman Thomas Prendergast requested for the authority’s capital budget—used for construction and maintenance—over the next five years, arguing that the city residents already pay three quarters of the MTA’s finances through the city’s current $100 million yearly contribution and through fares and tolls. The TWU ran a spot in the Daily News this morning accusing the mayor of ducking his fiscal duties to the transit system.

“That ad is pitiful. I mean, it’s misleading, it, it doesn’t tell people the truth,” he said, noting that the city has little power over running the MTA, as Gov. Andrew Cuomo is responsible for appointing its entire board of directors. “The truth is the MTA is the state’s responsibility.”

The ad, entitled “Where Are You Taking Us?,” caricatured the mayor as the conductor of a decrepit graffiti-stained train, and argued that his refusal to fork over more cash for the MTA would mean the Second Avenue subway going unfinished and a lack of investment in new subways cars.

“Mayor de Blasio risks taking us back to the bad old days of the 1970s and 1980s when graffiti-covered subway trains regularly broke down and rickety buses sputtered from stop-to-stop,” the ad reads. “Mayor de Blasio must switch tracks before disaster strikes. NYC must properly fund our system.”

But the mayor insisted that lawmakers in Albany would be at fault if any of those predictions come to pass.

“The state has budgetary responsibility for the MTA. So all of the dire warnings in that ad should be addressed the state of New York,” he said.

Mr. de Blasio did, however, leave an opening for possibly ponying up the money: if the city controls what happens to it. He pointed out that Albany has used the MTA budget as a piggy bank to fund other projects in the state in the past.

“We want to make sure we have an appropriate role in what happens to that money, appropriate oversight and transparency,” he said. “That’s not fair to ask taxpayers in the City of New York to put money into something and see it go right out the door into the state budget.”

The mayor and the union have clashed in the past over a “Vision Zero” policy, which stiffened penalties for motorists who hit pedestrians and cyclists in crosswalks—including MTA bus drivers.

Mr. Prendergast sent his letter to the mayor requesting the money on the eve of Mr. de Blasio’s announcement of his executive budget proposal. Many observers saw the move as a deliberately timed effort by proxy for Mr. Cuomo to undermine the mayor’s ability to set the city’s spending priorities.

Mr. de Blasio refused to say if he believed TWU had paid for the ad as a favor to any individual or entity.

“You’ll have to ask TWU what motivated them, or who asked them to do it. I’m not here to speculate on that. I think it’s an absolutely misleading ad, and it’s a pitiful attempt to disguise where the real responsibility for the MTA lies,” he said.

The TWU in turn tore into the mayor, arguing he was abdicating his duties to the people who depend on subways and buses.

“The ad and its message are spot on. The mayor has somehow deluded himself that he bears no responsibility for the safety of the working families of NYC who use our transit system. That is what is truly ‘pitiful,'” the union’s executive vice president, John Samuelsen, told the Observer. 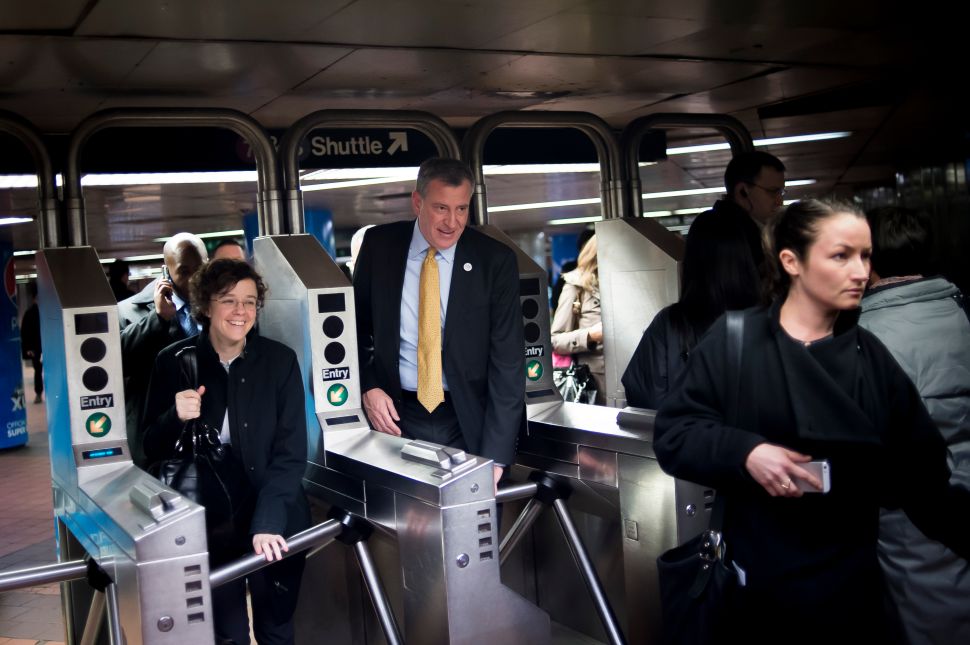