It’s Friday in New Jersey, time to look at another group of top performers in our state’s politics.

The 30 Most Influential Women In N.J. Politics, Elected and Nonelected
PolitickerNJ compiled a list of New Jersey’s most influential women. Among the ranks are the Lt. Governor, state senators, assemblywoman, lobbyists, union leaders and mayors.
Alyana Alfaro, PolitickerNJ Read more

Attorney for Revel Casino Widow Donates to Will Pauls for Assembly
New Jersey Election Law Enforcement Commission records show that Atlantic County Freeholder Will Pauls received over $5,000 in two donations from Paul D’Amato and his wife Sandra. The D’Amato Law Firm is representing the widow of construction worker Bryan Bradley in a wrongful death suit against contractors involved in the construction of the Revel Casino Resort in Atlantic City.
JT Aregood, PolitickerNJ Read more

Former Senator Mitchell Coming to Eagleton in October
Former U.S. Senator George Mitchell, a peace negotiator in Ireland and the Middle East, will be a guest at Rutgers University’s Eagleton Institute of Politics this fall.
Max Pizarro, PolitickerNJ Read more

Two Poles of Booker’s Base React to Iran Announcement
Following Senator Cory Booker’s announcement Thursday that he would be voting in favor of President Obama’s nuclear deal with Iran, the reaction from Booker’s supporters has vacillated between enthusiastic approval from progressives and a dismayed, if not shocked, reaction from the Jewish leaders who have been steadfast in their support of him in the past.
JT Aregood, PolitickerNJ Read more

Workers Reclaiming the American Dream
This spring 107 caregivers at a nursing home in Lakewood, NJ, organized a union. Despite providing critical care to some of Ocean County’s most vulnerable residents, these women and men often struggle to make ends meet at home. For Rosa Vazquez, a certified nursing assistant with over two decades of service, her desire for affordable health insurance gave her the courage to organize with her co-workers, despite facing intense pressure from her boss.
Milly Silva, PolitickerNJ Read more

Newark alters regulations to pave way for potential downtown casino
City officials are doubling down on their hopes for a casino downtown, though it will likely be some time before they know if their bet pays off.
Dan Ivers, NJ.com Read more

Christie criticizes Booker for ‘political decision’ on Iran deal
Just as soon as U.S. Sen. Cory Booker announced he supported a historic deal with Iran over the country’s nuclear program, Gov. Chris Christie said he was disappointed in what he called a “political decision.”
Matt Arco, NJ.com Read more

Chris Christie Holds New Hampshire Town Hall, As Monmouth Poll Places Him in Top 10 Republican Hopefuls
New Jersey’s governor is in New Hampshire again — on the presidential campaign trail trying to boost his poll numbers to ensure he’s on the main stage in the next debate. Right now, candidate Chris Christie is in, but barely it seems.
Michael Aron, NJTTV News Read more

Christie takes another shot at Trump, signs Republican loyalty pledge on-air
Having started his day on CNN decrying the “food fight” between Jeb Bush and Donald Trump, Gov. Chris Christie took another shot at Trump an hour later on Fox News as he signed, on air, a pledge that he would not run as an independent candidate, but only as a Republican.
Claude Brodesser-Akner, NJ.com Read more

Christie: Anti-gay marriage clerk should be given new job, not jail
Gov. Chris Christie on Thursday said that the eastern Kentucky county clerk ordered jailed over her refusal to issue same-sex marriage licenses should be moved to another job, not imprisoned.
Claude Brodesser-Akner, NJ.com Read more 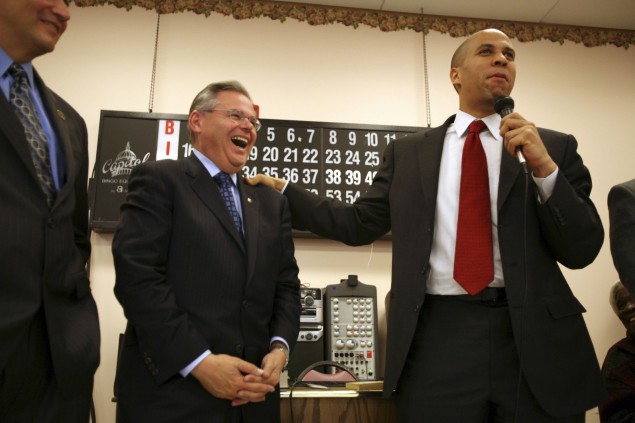