As Pope Francis arrives in America to bring his message for the world to the Congress in Washington, the United Nations in New York, and the city of brotherly love in Philadelphia, we should begin with St. Francis of Assisi and consider this Holy Father to be awarded the Nobel Prize for peace.

Francis of Assisi, who Pope Francis so devoutly admires and loves and from whom he took his papal name, was a man who loved the poor, cared deeply for animals, cherished the sanctity of God’s creation the Earth, and deeply believed that one man can make a powerful difference in an imperfect world.

When I was a young boy growing up in New York, I wanted to be like Babe Ruth, though sadly it was not to be. When Jorge Bergoglio, who we know as Pope Francis, was a young man growing up in Argentina he wanted to be like Francis of Assisi, and here he stands, addressing Congress in America and the diplomats of the world as the most profound, popular and inspirational public figure on the face of the Earth.

Pope Francis is the great moral teacher of the world who preaches the teaching of Jesus that those who have the most should sell their possessions and give the proceeds to the poor who have the least.

It is often said that Pope Francis is a critic of capitalism, which is true to the degree that he is a critic of the abuses of capitalism, in a culture he condemns as a cult of money, which creates a system that widens the gulf of income inequality that violates the principles not only of Catholicism but of great religions throughout the world.

It is often said by his conservative critics, incorrectly, that Pope Francis is a Marxist or communist or socialist. In fact, he does not call for nationalizing the means of production, he calls for economic systems in which the benefits of production are equitably shared by all.

Pope Francis believes in the great spiritual value of stewardship of the Earth, which is endangered by pollution caused by humans whose greed ultimately threatens the very existence of the Earth that was created by God. His papal encyclical on climate change is a powerful and timeless document of faith, science and environmental vision that offers an inspiration and guide to our generation on behalf of every future generation whose life and death could be decided by actions or inaction taken by those in power today.

Pope Francis teaches that love and caring for the poorest among us should be our high calling in a world of injustice, poverty and widespread deprivation that is a moral blot on the conscience of humanity in every corner of the world.

Pope Francis teaches that the homeless are blessed and should be served, and that the immigrants and refugees from carnage and bloodshed around the world should be granted a home by nations acting with a generosity of spirit and passion for justice and hope.

Pope Francis is the voice of tolerance and respect who believes that the great faiths should collaborate in efforts to better humanity and not warfare or terrorism to kill each other.

While some revel in the money or power they possess, Pope Francis teaches by word and example that humbleness and modesty offer the true path for men and women of abiding faith in all endeavors of life.

While Pope Francis is the great voice for the voiceless and powerless and underdogs of the world, he is the great underdog himself, directly criticizing and challenging the institutions and people with power in politics, finance and media.

In a world of sectarian violence and warfare in which criminals employ words that misrepresent faith to justify the murder of their neighbors, and addressing an America where prejudice and bigotry and fear remain no strangers to our political life, Pope Francis is the voice of tolerance and respect who believes that the great faiths should collaborate in efforts to better humanity and not warfare or terrorism to kill each other.

It is no coincidence, and it is profoundly revealing, that in 2010 Pope Francis published a book titled On Heaven and Earth, along with his friend the great Argentinian rabbi Abraham Skorka, about their many conversations discussing major issues of public life and their shared commitment to ecumenical cooperation of all great faiths to make life better for citizens throughout the world.

There would be no better recipient of the Nobel Peace Prize than this good, great and humble servant whose every waking hour brings light to the world and with this thought, I say: 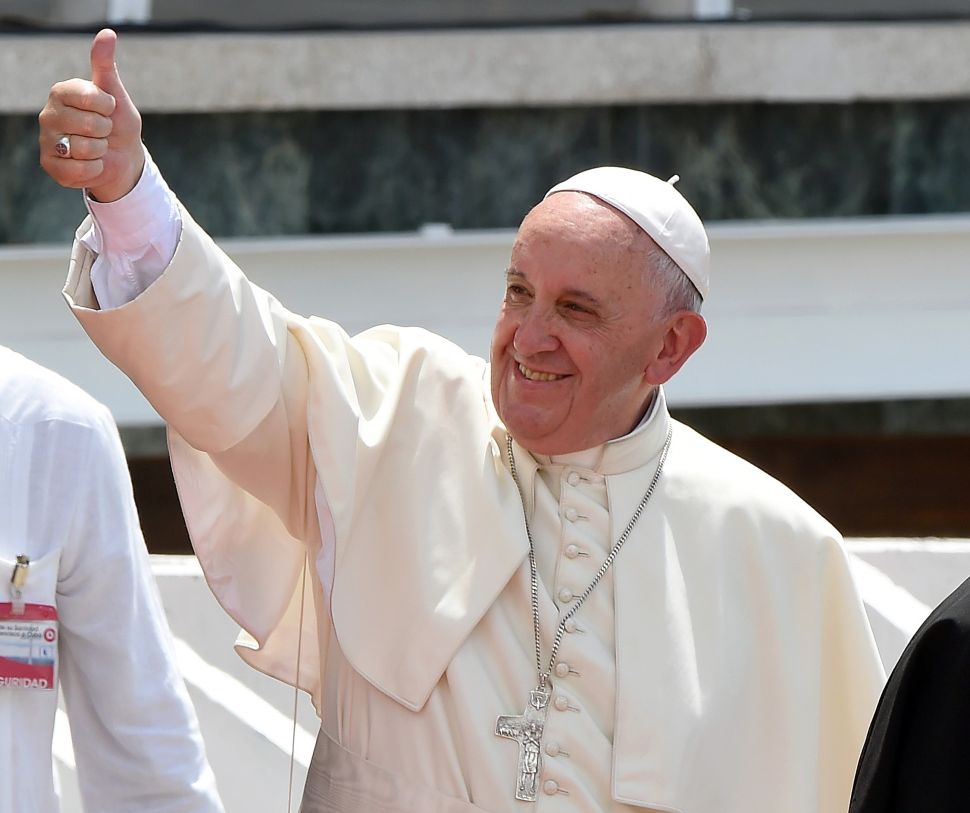