Brandon Maxwell’s New York Fashion Week debut on Monday night was undoubtedly one of the most anticipated events of the season. Having assisted Lady Gaga’s former stylist Nicola Formichetti (who logged time at Mugler before settling in at Diesel post-Mother Monster), it has been Maxwell that’s moved the pop star’s style into more elegant territory. But even new to the designer game, the Texas-born designer seems to already have his finger on the pulse on one of this season’s dominant trends: exposed shoulders.

If the perpetually late Rihanna had ever made it into the Givenchy show, she would have been greeted by the cold shoulders of models sauntering down the runway for Riccardo Tisci’s Manhattan defection. There, looks included negligee inspired tops of lace, and the odd halter topped champagne evening gown, no doubt headed for a red carpet moment. More than a thousand faces watched the show, the central top silhouette of which will no doubt become a mainstay of the season: an off the shoulder style that is essentially a reverse of this summer’s crop top trend.

As mentioned, Mr. Maxwell was right on beat, giving up sculptural, feminine variations. Halter necks on top and skirt sets, blush bandeaus and smartly tailored trousers for evening peppered the line-up. Of course he wasn’t the only fairly new designer that picked up on it. Andrea Jiapei Li, the Parsons MFA graduate whose graduate collection was stocked at Dover Street Market, was right there for her third showing. The Just Kids titled collection comes off just as feminine as Mr. Maxwell’s but skews more into daywear territory, incorporating sporty elements. Standouts include oversized bandeau tops held up seemingly by string. A rust colored option presented with a roomy pair of white shorts begged for attention in the same relaxed way Céline designs do.

Even Rag & Bone was in lockstep with the crew: slip dresses were a mainstay and halters were the silhouette of choice. Sure when the going gets too cold, there’s a puffy bomber to throw over it, but when it’s just right those spaghetti straps are good on their own. Though hosted in Brooklyn, the show definitely wasn’t far off from the other brands from the season.

Former Oscar de la Renta intern Wes Gordon also bared some shoulders. While there were a few simple shoulder cut outs for the Central Saint Martins grad, lazy marled knit tanks and plaid printed ruffled halter tops shouldered their way into the lineup. One of the last exits from the Winona Ryder-influenced range seemed to embody the brand’s latest iteration in full feeling at once precious and sexy at the same time, with it’s off the shoulder silhouette, torso cut outs and delicate, iridescent chiffon fabrications.

When you rope in off the shoulder options from the likes of Nicole Miller (her navy jumpsuit was an absolute inspiration), Ohne Titel, and Edun (the bicep grabbing looks were an interesting take) it’s clear that this is more than simple coincidence, it’s a bona fide trend. 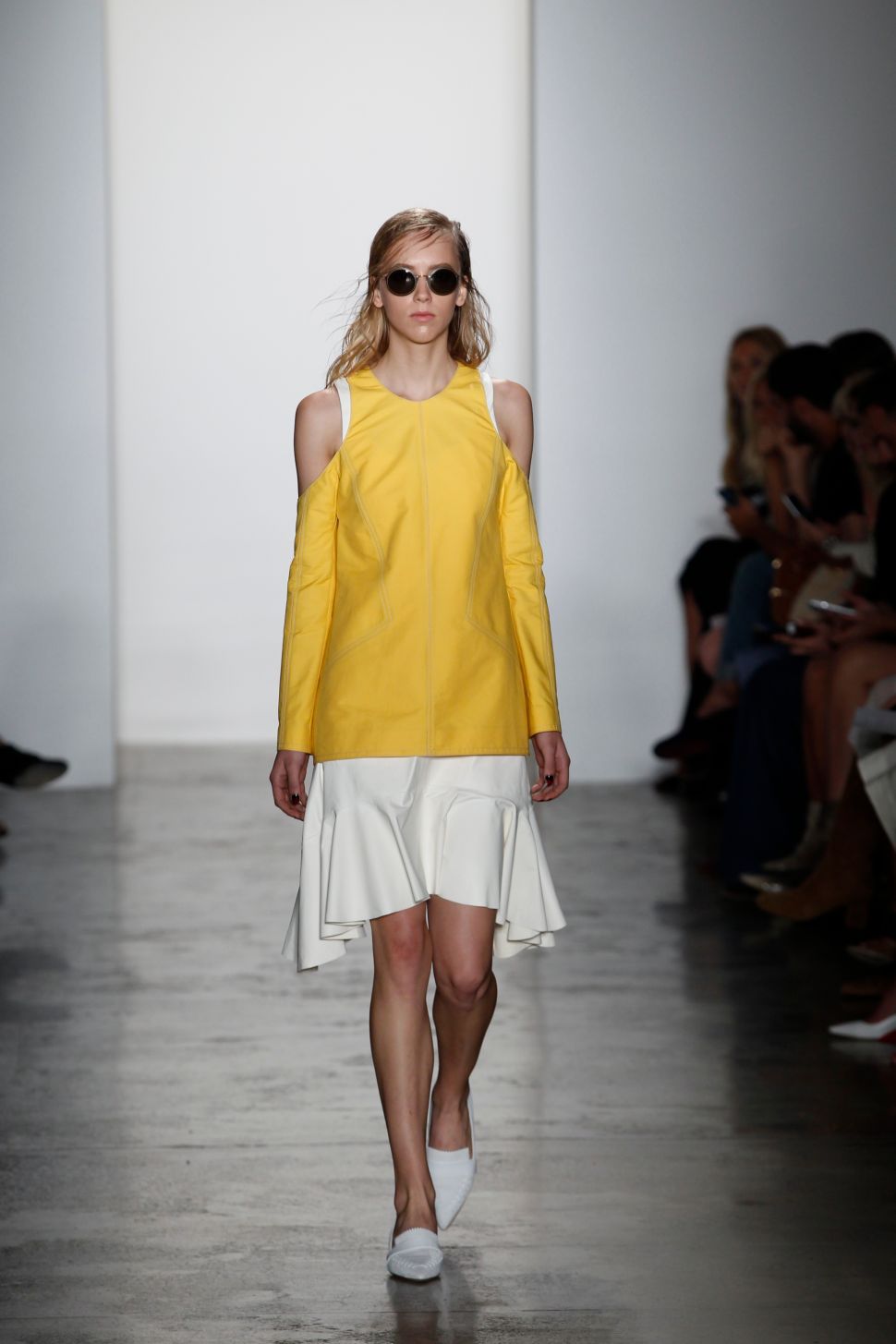