Obama and Putin. Putin and Obama. Comparisons are being made. But it is the contrasts that are so crucial.  Both men stood before the august body of the United Nation’s General Assembly and made their points for all the world to hear.

On the surface, it would seem foolish to compare the greatness, the power, the resources of the United States to that of Russia. And yet, we do.  The United States has a GNP of $18 trillion, about nine times Russia’s GNP.The Obama speech was masterful. He went straight to the point and delivered his message in a clear and convincing way. Putin’s meandering speech was, at best, cliche.  And which speech will have the greater impact on the world—hands down, the Putin speech.

But what good is your power if you elect not to use it. Resting on past laurels does not a great power make.

Militarily, Russia is strong in Syria. Diplomatically, they are even stronger.

Once upon a time the Middle East viewed the United States as a meddler and a bully. Countries wanted American aid, weapons and good graces, but not their input.

Today things are different. Now it is Russia that is flexing its muscles in Syria and in the greater Middle East region and they are being welcomed and heralded for their actions. The United States does not want to be seen as the bully or play the role of meddler. Instead, the United States acts like an outsider and has lost much influence in the region.

Russia has become the influencer. The Russia parliament has unanimously approved Putin’s use of military activity in Syria.  And so, Russia has not only invested billions in a sea port in Tarisis, Syria, they have also rebuilt many of Syria’s military airports. In Syria itself Russia has stationed crack commando units as well as their first team fighter jets and pilots along with support teams of tech and computer personnel.

Militarily, Russia is strong in Syria. Diplomatically, they are even stronger. Not only has Russia put troops on the ground, in the air and on the , Russia has formed an A-Team of commandos with Iran and Syria to slay ISIS.

The Russian claim is that the Syrians requested help and their policy is to help their allies. If you see that as a snub to the United States and their foreign policy in the region, you are reading the map correctly.  But there is much more behind Russia’s expanded actions in the Middle East than a mere snub of the United States. Just at the juncture where the United States is thinking—and acting—smaller diplomatically and militarily, the Russians are thinking bigger and even bigger.

Russia has outflanked, virtually eliminated, the United States and is now going to root out ISIS together with Iran.  They are going to do what the US has spent billions of dollars attempting to do but failed. The United States was swinging at tilting windmills. The Russians are tearing those windmills down.

In the war against ISIS the only role the United States now occupies is that of blowhard. The role of victor will now go, if they are successful, to Russia and to Iran. Yes, to Iran. And Russia’s hero role will not stop there. If they succeed in destroying ISIS, Russia will supplant the United States in their role throughout the entire Middle East.

This is not simply about objectives. The United States wants Syrian President Bashar Assad out and Russia wants Assad in. This is not about delivering great speeches at the United Nations – it is about who takes action, about how and what they accomplish and with whom.

Winning, even, at times, with brutality is the currency that is most respected and most feared in the region.

At this moment positions are in flux throughout the Middle East. ISIS is moving with great power and instilling fear.  Only Russia and Iran are willing to step in and check them.  And in exchange for helping, of this I am certain, Russia wants influence in the region—and shares in oil reserves.

But then again, Obama gave a great speech at the UN. And Putin didn’t. 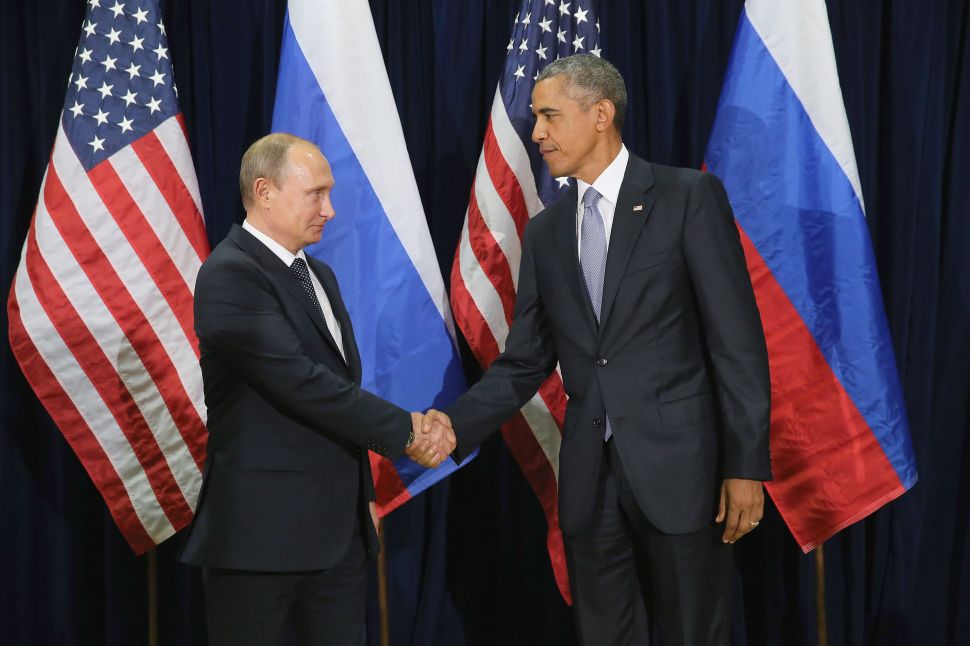