The law-and-order governor of New Jersey and the largest police force in America used to be mad love. But now we get bad blood. And it dates back four years to the day.

On Tuesday, Gov. Chris Christie took a swipe at Mayor Bill de Blasio for a culture of “lawlessness” in New York City. Police Commissioner Bill Bratton smacked back hard, calling Mr. Christie a “fool” and warning him to “stay within [his] own neighborhood” and even bringing up Bridgegate. “When he gets Trenton, when he gets Newark, when he gets Camden to be anywhere near as safe as New York City, then he might be able to criticize us,’’ Mr. Bratton added on NY1’s Inside City Hall.

If that sounds like an unlikely feud and a dramatic escalation, consider that the pressure has been building ever since a dramatic series of incidents that unfolded exactly four years ago. The story has been circulating since it occurred but doesn’t seem to have been recounted publicly until now. This version is the product of interviews with two people who were present at the exchanges described, plus one law enforcement source who did not witness these exchanges but was at the event and is an expert in the planning and procedures for this type of major commemoration.

The whole city was preparing for September 11, 2011, the 10th anniversary of the attacks on the World Trade Center. On Saturday, September 10, Gov. Christie and his family watched the Blue Hens defeat West Chester 28-17 at Mr. Christie’s alma mater, the University of Delaware. The Christie family then drove from Delaware Saturday night into Manhattan and stayed at the Intercontinental Hotel in Midtown, because coming into the city the next morning with all the security around the Ground Zero ceremony would certainly be a hassle.

It had been a rough evening. The football game hadn’t started until 6 p.m. and then the long drive and then the governor’s youngest son Patrick awakened in the middle of the night; when Mr. Christie got up to deal with it, he smashed his face on a glass shelf and cut his nose.

The dignitaries for the yearly memorial always have to gather early so that everyone is in place for the 8:46 a.m. commemoration of when American Airlines Flight 11 crashed into the North Tower of the World Trade Center. Because it was the 10th anniversary, President Obama and former President Bush were to join Gov. Cuomo, Gov. Christie and Mayor Bloomberg in laying a wreath on the Plaza prior to the first ringing of the bell at 8:46. So around 7 a.m., the Christie family loaded into the detail’s SUV, and Mr. Christie had a big bandage across his nose.

The route had been thoroughly rehearsed by Mr. Christie’s advance team, in conjunction with the state police and Secret Service. The plan was that the governor’s car was going to come in and drop him off right at the new 1 World Trade Center.

Understand, this had all been worked out in advance through complex negotiations, as have occurred every year surrounding the anniversary programming. The governor’s office and the mayor’s office had been discussing who would do what; Mr. Christie had expected to speak; Mr. Bloomberg’s team decided that Mr. Christie wouldn’t speak but that he would do a reading instead. Port Authority chairman David Samson had asked to speak and was denied, and so on.

Anyway, on that morning, David Samson, Bill Baroni, David Wildstein and Port Authority Superintendent of Public Safety Michael A. Fedorko were among a large group of PA brass as well as two NJ state troopers and a contingent of Port Authority police officers who were standing at the gate on West Street at the corner of Vesey waiting for the governor’s car to arrive. When it does, it’s part of a motorcade—Mr. Christie’s SUV with a NJ state police chaser car escorted by a marked Port Authority police car with the lights twirling—a three-car motorcade all being driven by police officers.

All of a sudden, standing in the middle of the street is a New York City police officer and he stopped the motorcade in the street and said, “You can’t go here. You can’t come in.” The NJ state trooper got out of the chaser car, showed his identification and told the officer—who is not of any senior status, just an ordinary patrolman—“This is Gov. Christie and his family in the SUV.” The officer sticks to his guns and replied, “You can’t come in here.” He said he had his instructions from New York City police about who had been cleared by the Secret Service and he won’t budge. Then the Port Authority police guy got out of his car, which elevates the situation from a police-to-police courtesy, since Port Authority police have police power in the entire state of New York. He explained to the officer that the governor needed to be driven through but this cop won’t budge. The PAPD guy said, “Why don’t you call a supervisor?” The cop replied, “I don’t have to. I’ve been told no.” According to two people, the entire delegation witnessing the scene had the feeling from the officer’s tone that he had been specifically told not to let Gov. Christie in.

As the argument intensified, the large group awaiting the governor inside the fence started walking toward the dispute. At that point, Gov. Christie exited the car, bandaged nose and all, and began screaming at the cop. Mr. Fedorko starts walking more briskly—before becoming an executive, he spent more than 30 years as a New Jersey statie and fought in Vietnam before that, so he understands confrontation. Before he reached the combatants, Mr. Christie yelled at the police officer, loud enough for the entire group to hear it, “I’ll walk the rest of the way!” He took a few steps, then turned back and took a step toward the police officer who had thwarted him and said, clear as a bell, “You tell Ray Kelly to go fuck himself.”

The fun was not quite over.

At this point Gov. Christie entered the special super-secured area where President Obama would be arriving. The plan was for Mary Pat Christie and their children to join a bit later. As has become the custom at these yearly memorials, the mayor runs the show and for this special 10th anniversary with the current and past president in attendance, Mayor Bloomberg was said to be leaving nothing to chance. The Secret Service had insisted on a fence around the Plaza. A Bloomberg staffer was manning the entrance to that fence—there was no need for security because this was like a secured area within the secured area. The idea here was that the laying of the wreath was going to feature only Mayor Bloomberg, Governors Christie and Cuomo, and of course President Obama and former President Bush. Everyone except Mr. Bush and Mr. Obama had been specifically told no spouses or other family could be accommodated for this part.

Gov. Christie took a step toward the police officer who had thwarted him and said, clear as a bell, ‘You tell Ray Kelly to go fuck himself.’

According to a law enforcement source with deep experience in this sort of event, “Once the president or a former president is coming, it becomes a presidential site so the Secret Service can take over and all other agencies take on an assist role. The USSS might even set up a temp HQ. The whole goal is that there should be no surprises.”

So before Mr. Christie arrives, his advance people are there outside the gate making sure everything is all set for him to come in to the extra secured area. Suddenly, it becomes clear that others got a different message. Mayor Bloomberg entered with his longtime companion Diana Taylor and they also bring Richard Blumenthal, the senator from Connecticut. Mayor Giuliani comes in with his wife Judith Giuliani and then George and Libby Pataki enter together.

Meanwhile, Mary Pat Christie—who incidentally worked on Maiden Lane, two blocks from the terror attacks—was stuck standing outside the fence as all these other people are waved through by the clipboard guy. Her children have joined her by this point and the governor’s advance guy has a look of “total fury” on his face, surely anticipating how Gov. Christie will react to this situation.

But then Andrew Cuomo showed up, accompanied by his father, former Gov. Mario Cuomo. They begin to talk with people milling around and Andrew Cuomo eventually entered while Mario Cuomo stood chatting with other VIPs near the Plaza entrance. It is clear that it’s time to find seats and begin when the clipboard guy actually denied him entrance. The beloved 79-year-old former governor of New York was prevented from joining his own son, the current governor of New York, to mark this solemn occasion. A Christie insider told the Observer that “As pissed as Christie was, [Andrew] Cuomo was twice as pissed at Bloomberg. Here’s Blumenthal on the Plaza but not Mario Cuomo.”

Meanwhile, Gov. Christie’s guys are starting to feel their oats. This is Port Authority property, they reason. One person told me the thought emerged among their group, “This is bullshit. This is our place, let’s bring Ms. Christie on the Plaza.” At this point, Mr. Fedorko, who happens to be a mountain of a man, said to the group, “I’m going to walk Mrs. Christie onto the Plaza.”

He brought Ms. Christie up to the gate and told the kid from the mayor’s office, “I’m Superintendent of the Port Authority police and I’m escorting Mrs. Christie onto the Plaza.” The kid from the mayor’s office replied, “I’m sorry, no. She can’t come up. No spouses.” Mr. Fedorko looked at the kid and looked at Messrs. Baroni and Samson and Wildstein. He turned back to the kid and said, “This is the first lady of New Jersey. Step aside or I will pick you up and move you aside.” The kid stepped aside and Ms. Christie joined Gov. Christie on the Plaza.

At that point Mayor Bloomberg’s staffer lost control of the gate. Either Mr. Wildstein or Mr. Baroni said to the advance guy, “Should we bring the kids in, too?” The advance guy said why not, and Mr. Fedorko escorted the four Christie kids onto the Plaza.

According to sources within Gov. Christie’s inner circle and in the Port Authority, this was the root cause of the bad blood that has taken many forms ever since. For example, Chris Christie strongly weighed in against the NYPD program of spying on Muslims, a stance that surprised many Christie supporters. In so doing, Mr. Christie used unusually personal language, sarcastically telling a radio station, “Well, because he’s Ray Kelly, what are you going to do? He’s all-knowing, all-seeing.”

On the flipside, this was also the root of the very close relationship that developed between Gov. Christie and the Port Authority police. Many in New Jersey were surprised when he received the endorsement of the PAPD union and in return promised that no other policing agency would have authority over the site while he had anything to say about it. 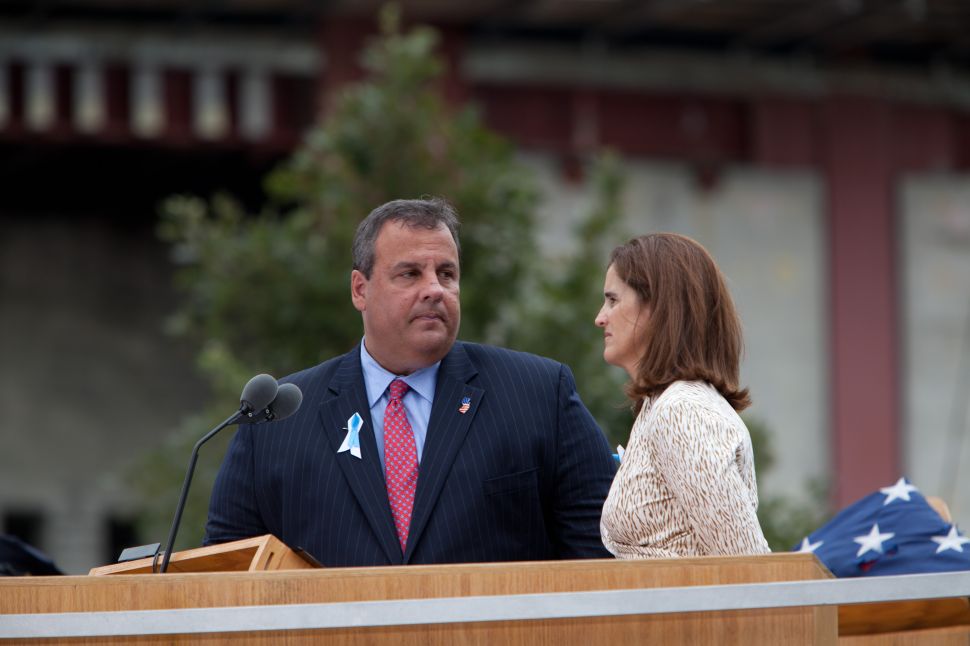