The Martian is a science fiction popcorn movie that is destined to be a genuine crowd pleaser. You can write the plot on the head of a pin. When a storm hits outer space, the crew of Sol 19, a space mission to Mars commanded by Jessica Chastain, is ordered to emergency-evacuate the planet, leaving astronaut botanist and mechanical engineer Matt Damon behind. Declared dead by NASA, he is stranded 140 million miles from home to face the unknown challenges that await him while he waits to be rescued.

This all happens in the first 10 minutes. The next two hours chronicle the ingenious ways he manages to stay alive using his unique skills to make , fertilize a new food store and keep from freezing to death. He also has to battle depression and fear, and fight going insane from the disco music left behind on the spacecraft. Based on the novel by Andy Weir, there’s a lot of talk in Drew Goddard’s screenplay about airlocks, proximity radars and aeronautic science we heard in Gravity as well as the same floating stars and shooting comets in Ridley Scott’s direction that we saw three years ago in Prometheus. But the appealing thing here is the unquenchable spirit of the stranded astronaut, his horrified crew on the mothership Hermes after discovering their comrade is still alive, and the scientists, administrators, inventors and assorted space nerds in Houston who rack their brains to bring him home.

There’s not a lot of suspense because he’s the most brilliant astronaut alive, so we know he’s going to survive. The fascination comes from watching everyone test the limits of the space program to beat the odds. The way Mr. Damon figures out a way to re-establish communications with NASA, how China heroically compromises its own space program to offer assistance, how an aerodynamics geek comes up with a plan of his own to send the five-man crew of the Hermes to intercept Sol 19 in an unprecedented meeting in mid-galaxy while millions gather to watch in Beijing, Texas and Times Square—these are some of the strategies guaranteed to keep your attention from straying.

The stellar cast includes Kristen Wiig, Chiwetel Ejiofor, Sean Bean and Jeff Daniels. The camera draws the viewer into the action, transforming us into participants instead of passive voyagers. A lot of the information in The Martian will be incomprehensible to the lay audience and the climax is…well, not exactly original. But it makes for one hell of an entertaining ride. 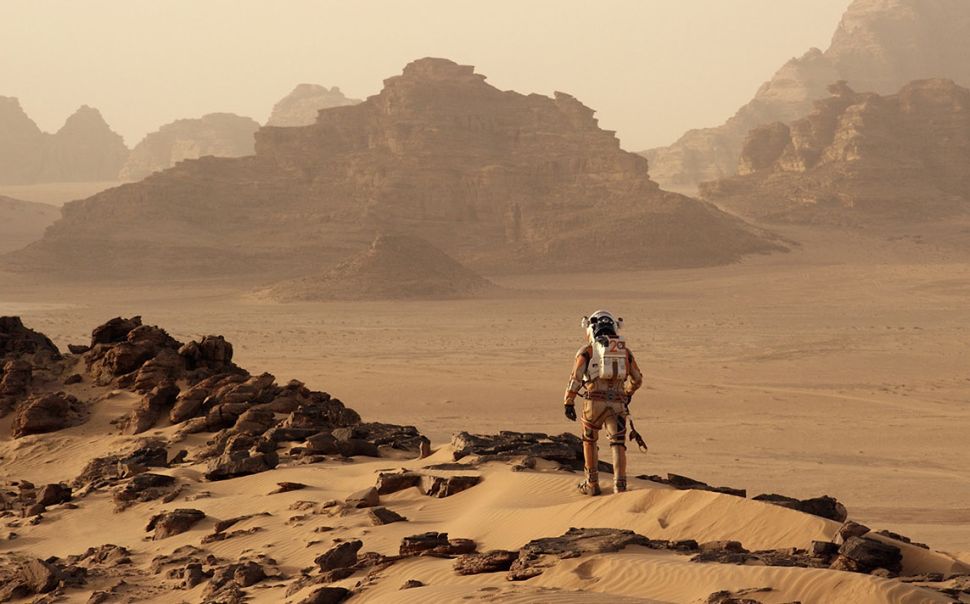