Remember May? Before the summer of the humidity and the blockbuster movies and the pizza rat and those political debates? Olivia and Fitz were making out at the White House but then they abandoned us for four long months? FINALLY, Scandal is back. So wrap yourself in that wine cardigan and make yourself a big bowl of popcorn. It’s handled.

So where did we leave off? Mellie won an election. Huck killed all the B613 jurors and frakkked the trial (and David Rosen) up. Quinn was pissed. Fitz kicked Mellie and Cyrus out of the White House and Olivia kicked chaotic-evil Papa Pope and Russell and chaotic/lawful neutral Jake to the curb.  And Olitz got jiggy with it on the White House terrace. I hate the shipname Olitz so we’re going with the much more eloquent “Olitzia” from here on in.

Where we begin: Former Vice President Sally Langston (who was also Meredith Grey’s mom, but there are no crossovers in TGIT-land) chastises the American viewing public for embracing a mere commoner who magically becomes a princess. Even though we’re treated to a montage of Olivia (commoner?) sexing up Fitz (the prince?), SURPRISE, Langston is actually talking about Princess Emily of the fictional country Caledonia. (Not to be confused with “Caledonia,” which is Dougie Maclean’s song about Scotland, and if you ask people singing in a tiny pub in Inverness to sing “Caledonia”, they will say “That’s Dougie’s song!” and then launch into a spirited song with a refrain about “Losing my erection” that sounds an awful lot like that R.E.M. song.)

Sexytimes, sexytimes, sexytimes, and we’re led to believe that Olitizia is making their first public appearance at a state dinner. But no! Fake out! Olivia watches Fitz make nice-nice with the queen of Caledonia, as Ms. Pope handles things from her own not-really-White-House-staffer table. (Mellie can’t attend the event because she allegedly has the flu, except she’s totally healthy and rather pissed off). Abby accidentally smacktalks the princess in the ladies’ room and Olivia apologizes on her behalf. But nothing really matters because …

Ya Heard With Perd tells us that Princess Emily of Caledonia is dead in a gruesome car accident. It’s all rather Princess Diana as Olivia rushes to the scene of the crime. She sends Quinn out to pay off all the paparazzi to prevent them from publishing photos of the Dead Princess. The late princess’s husband agrees to be photographed looking at the body so the dreaded press has an image to run with that’s slightly less gory than a cadaver.

Olivia and Quinn enhance-enhance-enhance photos of the accident and discover that one of the paparazzi chasing the Princess was actually a member of F Society (maybe?) and his hackerness definitely means this whole murder is actually an X-file. So to speak.

Meanwhile, Mellie is sworn in as the newly-elected Senator of Virginia and Fitz gaslights his staff by appearing at her ceremony despite swearing that he won’t attend. He carpes the diem by using this opportunity to serve Mellie with divorce papers. Finally! He’s going to make Olivia his legit lady and they’ll be able to run off to Vermont together to wear white hats and make jam!

Except Fitz wants to build a naval base in Caledonia and Olivia is busy accusing the Caledonian Prince of murdering his wife so our star-crossed lovers are at odds, in public, in the White House. Their fight hips Abby and Liz North to the fact that Olitzia-as-a-couple is definitely happening again. Abby and Liz sigh at each other. Neither one of them knew Olitzia was back to being a thing. Sigh, sigh.

Olivia retreats to the safety (ha!) of her apartment where we learn that a broken Huck is sleeping on her couch and being all fidgety after he did that thing where he killed all the B613 trial jurors on that bus last season. David Rosen reveals that the late Princess Emily was pregnant and they all deduce that she was sleeping with her bodyguard so surely the jealous Prince set this whole thing up. Except – SURPRISE — the Evil Queen had Emily killed to prevent commoner-genes from infecting the royal pureblood.

Fitz and Olivia rendezvous on their favorite greenscreened White House terrace and argue about telling the world about their grand affair. Olivia isn’t ready yet, because she is someone who understands how the news cycle impacts politics and also personal lives. Too bad for her, because VP Langston and “The Liberty Report” share photos of the couple getting a little too close for comfort because there is no such thing as privacy when you’re the President of the United States and you’re having sex with your mistress just off the Truman Balcony. Mellie will definitely be delighted about this development, and somehow surely that’s going to bring Cyrus back to the White House because his ears perk up anytime he hears Olivia Pope’s name. And how will ex-B613 member Jake help former/current B613 member Huck? Onwards, Gladiators! There’s so very much to handle. 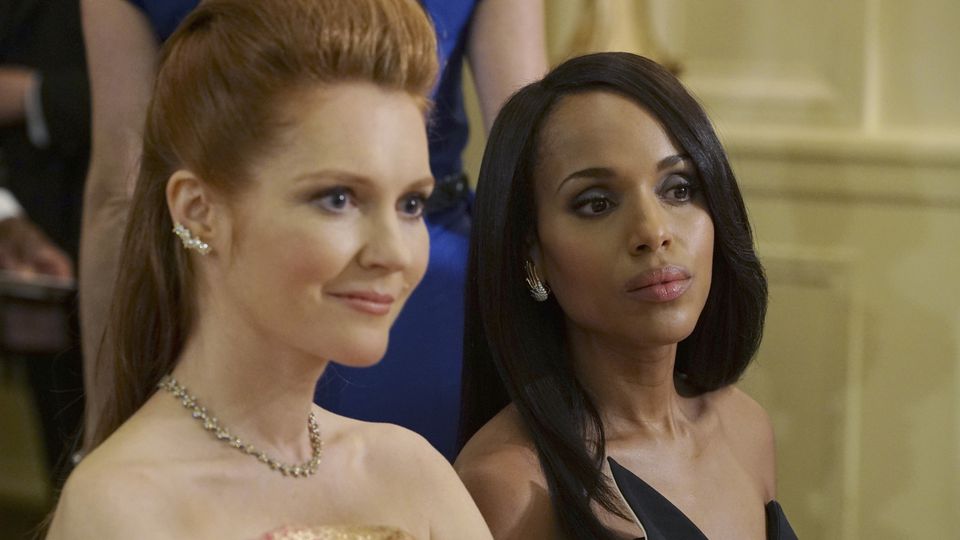