Oh, Scream Queens episode three. What a strange, funny little episode you were. How little you developed plot. How offensive your jokes are. But how I enjoyed you.

If you asked me what exactly happened in this episode, I couldn’t tell you. Not even a little bit. There were many chainsaws, and as expected, a lot of screaming. But this episode served as more of a set–up for future plot lines and fan theories more than anything else.

I’ll start with the best scene: the fight sequence between Chad’s fraternity and not one, but two Red Devils. That’s right, two people decided to team up, wear bright red latex, and murder people with chainsaws. Think of the coordination that must take—the meetings they must have had, the tailoring those suits must have needed. I’m not one to speculate, but methinks Ryan Murphy might have some kind of latex fetish (Rubber Man of AHS: Murder House, here’s to you).

Chad suspects Boone did not commit suicide (a story touted by Dean Munsch), but rather was murdered by the Red Devil. Chad proposes to his fraternity that they hunt the suspect. The idea is warmly received—we know this, because the frat brothers genuinely yelp with joy. I don’t know who does the casting for this show, but they did a tremendous job. I’ve never heard such masculine yelps in all my time.

However good the casting is, though, costume design is what really shines in this sequence. The boys are decked out in completely white outfits. There are fedoras involved. The frat decides to roam the streets, beating anything red with wooden baseball bats. However, the Red Devils quickly show up. The baseball bats just can’t compete with the Devils’ weapon of choice (chainsaws), and the frat brothers quickly realize they’re at a disadvantage.

Well, not quickly enough. One brother loses not just one, but both of his arms in his battle. A shame, really, to cut through such a nice white velour track suit. RIP, limbless frat brother. You fought a good battle. (I secretly hope he survived to tell the tale. Think of what an autobiography that would be! Typed, of course, by someone else. Because of his missing arms.)

But I digress. This episode has an underlying theme of “chainsaws are dangerous, and also indicate murder!” The Red Devil(s) uses it to kill throughout the episode. Grace’s unbelievably creepy father is obsessed with The Texas Chainsaw Massacre. Zayday keeps a chainsaw underneath her bed. Coney (the mascot intended to replace the Red Devil), is painstakingly sawed in half. I wouldn’t be surprised if this was a thinly veiled reference to Kony 2012 campaign. I’m just speculating here, but what if Kony is the Red Devil? Ryan Murphy, you sly dog. Look at you, being political. Anyway, RIP Coney (the mascot, not the war criminal. I’d be okay if he died).

I might be using Kony to mask an internal debate—I don’t know how much to criticize the show. It’s so campy, it’s hard to take it seriously and critique it as a credible program. Take, for example, when Zayday and Grace suspect Chanel #2 has been murdered, so they fly to Bel Air to talk to her parents. Don’t they have class? Why don’t Chanel #2’s parents contact the police? Why do they leave it up to two teenage girls, who also refer to their daughter as Chanel #2?

The perplexities don’t end there. Why on earth would the writers remove Hester’s back brace? Lea Michele shines in her back brace. Figuratively, but also literally, because there’s so much metal to reflect light. It’s what made her my favorite actress on the show. And now they went and made her Chanel #6. Goodbye forever, Hester. Hello, Chanel #6.

This episode noticeably lacked Grace and Chanel. I suppose after the two–hour premiere, the writers decided to take a break from their main characters. And to that I say thank you, because the minor characters are far more interesting.

Take, for example, Chanel #3. She reveals to Sam (the tattooed, lesbian sister, for those who are bad with names) that her father is Charles Manson—she was conceived in a conjugal visit. Now that’s a back story I’d like to delve further into. Although it’s perhaps not a flash back I’d like to see. I would, however, like to know why Chanel #3 is always wearing ear muffs.

And for that matter, why is everyone in this show wearing some type of hat with ears on it? Zayday wears a Mickey Mouse fashioned beanie. Chanel #5 sports pearl bunny ears. Does Ryan Murphy also have an ear fetish?

Amidst the rapid (and seemingly arbitrary) jumping around from character to character, there were some standout moments in the episode. Gigi and the Dean move into the Kappa house under the pretense of protecting the girls—when the two share a room, the Dean plays a white noise machine with recordings such as “whale distress calls” and “bamboo attack” to anger Gigi. Denise (Nicey Nash’s amazing turn as an incompetent security guard) becomes a rare voice of reason for the girls; when Grace and Zayday fight about whether or not there is blood on Chanel #2’s carpet, Denise berates the girls (and all horror film stars, as a matter of fact), for their stupidity. “You know how many times it’s ketchup?” she exclaims. “Like, zero percent of the time.”

And, as a final bonus: Pete, Grace’s creepy crush/also potential murderer was only onscreen briefly, so we only see him grin his unsettling murder–y grin about three times. I’d consider that a success. 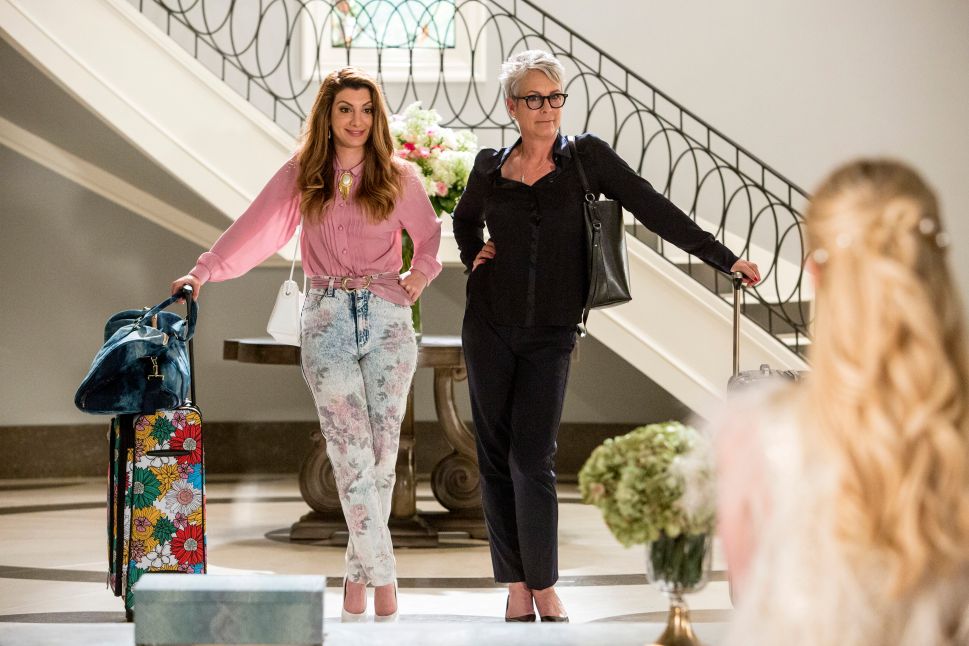