It all began with an infinity pool. The X’s decided the one they had just built in their Bridgehampton home was a foot too short, and so for the month of August while renovations resumed, they rented my friend Victor’s sprawling home in Southampton.

I meet Ellie and Victor for drinks at The Smile one night before venturing out on a blind date at Sant Ambroeus. An already tipsy Victor is bursting to share his all-time favorite, new reality show—the X’s.

“They’re even better than the Kardashians,” Victor says, wiggling in delight.

“Is this legal?” Ellie asks.

“It’s my house,” he scoffs, “and what’s the purpose of having a Canary Cam if you’re not going use it?”

And there on Victor’s iPhone 6, is Mr. X in shorts and a fitted white T-shirt embarking upon a killer smoothie. But first, he grabs a container of orange juice from the open fridge, rethinks the impulse, and returns it to its rightful spot. He remerges with a box of blackberries and a container of sliced cantaloupe and places them firmly on the counter. Resting his hands on his hips and showcasing his taught arms, he pauses.

“What’s he going to do next?” Ellie commentates.

Almost robotic, Mr. X heads to the cabinet, swipes a large glass, inspects it in the light and sets it decidedly on the counter. He then washes the berries, shakes off the with efficient jerks and one by one drops each berry into a blender.

“We probably shouldn’t be watching this,” I say, feeling creepy.

“But you have to see how he peels the banana,” Victor chirps, sipping on a Cucumber Fizz.

Mr. X strips the banana with three methodical thrusts, grabs a sharp knife and cuts it into measured slices.

“A man like that needs to be broken in,” Ellie tells us.

“She’d grab him by his berries and blow his banana,” Victor teases.

“Something like that,” Ellie laughs, “and then I’d fuck the OCD right out of him.”

“What he needs is a good spanking,” he giggles.

An enthusiastic Victor fast-forwards the footage to the X’s kids. “Look at these gems.”
He lands upon the tween daughter moping about. “Mom’s so lazy—she left the faucet running.”

“Is she trying to flood the whole fucking house?” The teenage son throws his arms up in the air. “That dumb ho.”

The kids take off to another room.

“I need a smoke,” Ellie grimaces.

Victor and Ellie, tight since childhood, head outside, leaving me with the X’s primed at 11:47 p.m. later that night.

I feel uneasy, perhaps guilty, but I press play anyway. The screen is dark, except for the time and the temperature in the left lower corner, until the overhead light turns on and it’s Mr. X. He walks like a boss to the cupboard and pours himself a tall glass of . Moments later, Mrs. X appears in an open silk robe and white negligee.

“Hello,” she says, inching toward him.

He walks around her and opens the fridge. “Hello.”

“The kids are asleep.” She leans in against the counter.

“Good,” he says, closing the fridge with nothing to show for it.

As he passes her, his arm barely touching hers, he winces. She just stands there and runs a hand through her dirty blonde hair.

As if emboldened by the rejection, she says coolly, “You crossed a line today.”

“They’re just rodents,” Mr. X explains, now seated at the counter looking up from his iPad, “and the biggest carriers of Lyme in the Hamptons.”

“You don’t get it, do you?” She wraps her robe shut. “You hit a deer over the head with our son’s baseball bat.”

“Someone’s got to do something,” Mr. X scrolls down his iPad. “They’re out of control.”

Mrs. X tries hard to swallow her anger. “And you think it’s O.K. the kids heard the skull crack?”

I can’t watch anymore of the X’s. I have this sick, depressed feeling.

So I head to my blind date. He’s handsome and shovels prosciutto and burrata on my plate.

“If it’s the guy who runs that big fund XYZ Capital, sure. His wife’s on the board of LMNOP with my ex-wife.” And then, eyeing me: “You’re just picking at your plate.”

“I just like pigs. Have you ever heard of Gordy or Babe?”

“I’ll bet you don’t do casual hookups either,” he assesses. “You need an emotional connection.”

“Because I have an affinity for pigs?”

He sizes me up. “I know products like you.”

“Did you just call me a product?” I laugh and waive down the waiter for a Moretti.

At that point, I may have made a comment that provoked a discussion about patriarchy.

“How about it’s a matriarchy?” he baits me. “I’m working my ass off 20 hours a day like some goddamn Filipino and my ex-wife’s out shopping and lunching at Bilboquet.”

“I highly doubt that’s all she’s doing,” I tell him, “and that’s certainly not most women’s reality.”

“You’re aware the laws are entirely in favor of women, right?” he presses on.

My breath gets shallow and my muscles harden.

“If we were to fall in love and get married,” my date continues, “I’d hire the best lawyers, make you sign a crazy prenup and do an extensive background check on you.”

“I have bad credit,” I blurt, giving him a head start.

“I’m beginning to think relationships should be stress-tested like companies,” he adds, half-joking.
“How would you go about doing that?” I ask.

“I’m still working out the details,” he chuckles.

“Maybe you need some time to process your feelings about your ex-wife,” I suggest.

“Maybe,” he says, cutting into his veal milanese and then looking right at me. “Why are you still single?”

I hem and haw.

“I’ll tell you why and I could be wrong, but you’re your own biggest enemy. You spend too much time thinking about life and not enough time living it.”

My blind date’s getting under my skin.

“We should do this again,” he says, a little later, picking up the tab.

When I get home I follow Mrs. X on Instagam and browse her photos. She throws an indulgent dinner party, has impeccable style with toned arms, a stunning smile and a great ass. Mr. X is quite muscular himself. There must be a lot of exercise going on between the two of them—perhaps not from sex—but either way, they’re movers and shakers.

Mrs. X has a steep following. She amassed over a thousand likes for a pesto dish she posted in Positano this past summer. The yacht shots were chic too. The was a sharp aqua and her white bikini popped against tanned skin. And then there’s the photo of Mr. X waterskiing, the kids cheering him on, captioned #happyfamily.

In pictures the X’s look aspirational, and if I hadn’t snuck a peek into their private lives, I might almost feel envy. 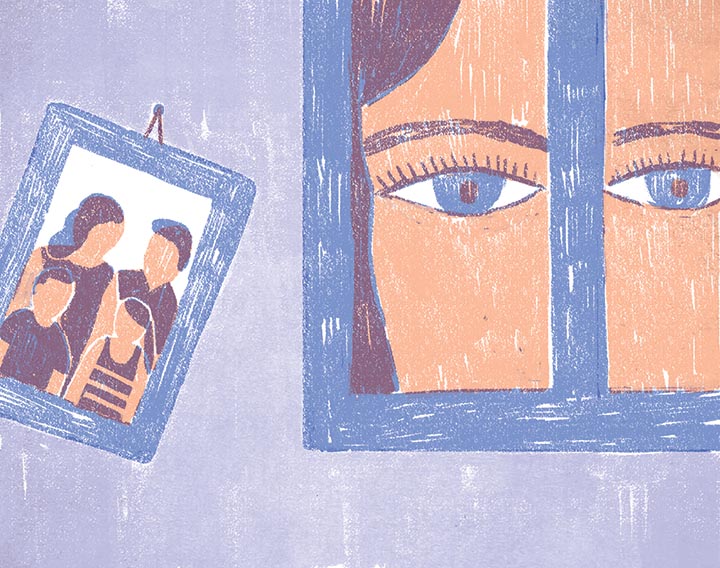