Remember how great the 80s were? Survivor was a band not a show and we didn’t need the Department of Justice to issue special guidelines announcing that white collar criminals would be punished, they just were.

Since 2005, Mr. Levine’s contributions to American financial history have been the source of a fierce but quiet debate inside Wikipedia. In all, 225 edits have been made to Mr. Levine’s page since it was first created, by 104 different Wikipedia users. More than a third of the editors have been anonymous. The digital altercation illustrates how important the crowdsourced resource has become.

While there’s no way to know for sure if the anonymous users toning down the page of Mr. Levine and his cohorts did so at their behest, we do know that others have done so. This summer, Sunshine Sachs, a PR firm, admitted that some of its employees had been polishing the tone of entries about some of its clients in a New York Times story.

Mr. Levine’s Wikipedia entry cites James Stewart’s 1991 Pulitzer Prize winning masterpiece, Den of Thieves, “Over the years, Levine built up a network of professionals at various Wall Street firms who engaged in insider trading. Participants exchanged and traded on inside information they obtained through their work.”  The book describes Levine as being only mediocre at investment banking—he is memorably dismissed by Mr. Stewart as the “overweight, overeager, self-promoting, ineffectual Dennis Levine.” But the books says he does have one great skill: recruiting lonely losers at rival banks and related law firms, and grooming them to go through their boss’ papers at night to share their secrets with him. Now, it seems as though a different type of crew has been established—a Wikipedia cleaning crew is toning down the record on men associated with this era of financial misdeeds.

It is not really possible to hide a change on Wikipedia. Every single version of the text of a page is kept. All anyone has to do to find out what’s changed is to compare one version to another, and the system makes it simple to do it, even highlighting parts where versions differ.

Here’s a breakdown of edits to the pages devoted to four of the major actors in those prosecutions:

To focus in on Mr. Levine, whose investigation led to the fall of the rest, we see that the page about him first went live on June 14, 2005. The original page was written by an anonymous user who appears to have been working from the Hewlett-Packard Corporation in Palo Alto, California (based on the user’s IP address). The original page was fairly short, a total of 3,856 bytes. The IP address associated with that first draft was active from 2002 to 2009, editing a wide variety of pages.

Since then, the page has been the subject of an edit war conducted largely between a rotating cast of users identified only by their IP addresses and one dedicated editor, HangingCurve, out of North Carolina. A variety of anonymous IP addresses weigh in over the course of the imbroglio. Most of them seem to be using accounts that mask their location, though early on several appear to be located on Long Island. Later, the edits come from increasingly exotic sounding servers that place the users in locations such as Zurich, Texas and California, but they may be using services that help ensure IP privacy.

Of the two adversarial parties, HangingCurve was the first to weigh in on Mr. Levine’s page. He made his first major contribution on September 18, 2007, putting the story in a more chronological order and adding information from the subject’s autobiography, Inside Out.

An anonymous account currently assigned to a Verizon FiOS IP in Hewlett, on Long Island, made its first attempt to clean up Mr. Levine’s page on July 23, 2008, beginning with this revision, which removes the statement that “his math skills were marginal at best.”

The user’s second set of revisions that day is more interesting, however. First, despite Mr. Levine’s conviction, it inserted “alleged” into a description of his crimes. It added a number of edits to bolster his importance, such as calling him a “top deal maker” and describing his career as “meteoric.” One tiny edit changed the phrase “illegal profits” to “trading profits.” Lastly, but perhaps most tellingly, it amended his intro to make it clear that Mr. Levine was working with Michael Milken, also known as the “Junk Bond King.”

The battle is joined

On September 18, 2008, Moe99 removed the more hagiographic additions to Mr. Levine’s entry, including the “alleged.” Three days later, Wikiscriber1, an account that has now been banned, would restore all of it. Moe99 opted out that October, but HangingCurve carried on.

One feature of Wikipedia that can make an edit war really obvious is the ability for any user to “undo previous edit,” effectively returning a page to the state before someone did work on it. In fact, a user can return a page to any prior edit at any time. With a click, someone could return Mr. Levine’s page to the state of that initial entry from 2005.

A fierce battle of undoing and redoing edits ran from October 2008 to September 2009. Basically, different users went back and forth putting in and taking out language that made Mr. Levine sound like an important, innovative banker and downplaying his crimes.

Here’s a quote that the anonymous accounts have fought hard to keep in. It characterizes his work once he left prison, and has the quality of the bio at the end of a press release:

Eventually, Levine returned to the finance world as president of ADASAR Group, a financial consulting firm. In his role as financial strategist and business catalyst, Levine helps companies develop competitive business models while forging meaningful strategic relationships through his unparalleled access and know-how.

Several of the edits in this battle were made by an IP currently registered to another FiOS account, in Great Neck, New York.

Notice how the numbers hover right around 1,100 bytes. One user would add in 1,100. Another would take them out. The digits are frequently exactly the same value, which almost certainly means the subsequent user simply selected “undo” on the last edit.

A user going by Elm-39 joined the fray during this period, even visiting the talk page of an anonymous account to advise them not to add personal analysis to entries.

In September 2009, HangingCurve had had enough. He used a JavaScript feature of Wikipedia called Twinkle to protect the page, writing the following note with that edit, including acknowledging his own bias: “Numerous attempts by an IP-hopping anon to turn the article into a fluff piece. I’m somewhat skeptical about protecting it myself, since I wrote a good deal of the article.”

The focus for the anonymous accounts shifted in 2011. Multiple attempts would be made to remove the part of the entry that refers to Mr. Levine pleading guilty to insider trading. Finding that straight deletion wouldn’t work, on December 6, 2011, an anonymous user replaced that section with a part that described just how many different bankers were engaging in insider trading at the time, as shown in this screenshot:

This edit was made by a user on a server in Zurich, run by a Republic of Panama company called Private Layer, Inc.

A particularly brazen edit took place on May 25, 2012. An anonymous user took advantage of WiTopia’s IP masking technology. In this particular round, anonymous users would attempt to remove information about the size of Mr. Levine’s penalty from the SEC, the fact that he’d been permanently banned from trading and a statement about the destruction and alteration of relevant documents. It would also remove five full paragraphs about the investigation into Mr. Levine.

Though the user switched to a different IP address late in the fight (or someone else would take it over), they would go back and forth with HangingCurve from May to September 2012 over the same 1,848 bytes, undoing and redoing repeatedly.

This round culminated on September 23, 2012, with multiple rounds on the same set of edits in the same day. Finally, another user, Xymmax, would side with HangingCurve and mark the entry for protection from vandalism.

Mr. Levine’s partisans went quiet for just shy of one year. The same IP address that made the first edit on May 25, 2012 would return to make a less ambitious sally on September 18, 2013. In this effort, it removed specifics about the charges that Mr. Levine pled guilty to, changing the list from “securities fraud, insider trading and tax evasion” to “charges related to insider trading” in two separate parts of his page.

It also deleted one paragraph that had also been deleted again and again multiple times before. The fact that it’s the one paragraph for attempted assassination in this last gasp attempt suggests there is something especially important in it. Here it is:

Subsequently, Levine directly implicated powerful arbitrageur Ivan Boesky, and information from the Boesky case also implicated another prominent player in the mergers and acquisitions circle, Martin Siegel. Both Boesky and Siegel subsequently pleaded guilty. Due in part to this cooperation, federal judge Gerald Goettel imposed a lenient sentence of two years in prison and a $362,000 fine. However, since Levine had been stripped of nearly all of his liquid assets by the SEC and IRS, Goettel did not “commit” the fines, meaning that he would not be held in contempt of court if he left prison without paying them. At sentencing, Goettel said that Levine had helped expose “a nest of vipers on Wall Street.”[7]

In the revision, Mr. Boesky would simply plead guilty, rather than be implicated in Mr. Levine’s activities. These changes went unnoticed by the page’s main defender for almost a year, when on September 7, 2014 HangingCurve again replaced the cited information. In October, he once again touched up the language in a few key parts.

Very little has changed since these last edits.

The Observer attempted to contact HangingCurve, Xymmax and several of the anonymous IP addresses through their Wikipedia talk pages. We received no response. 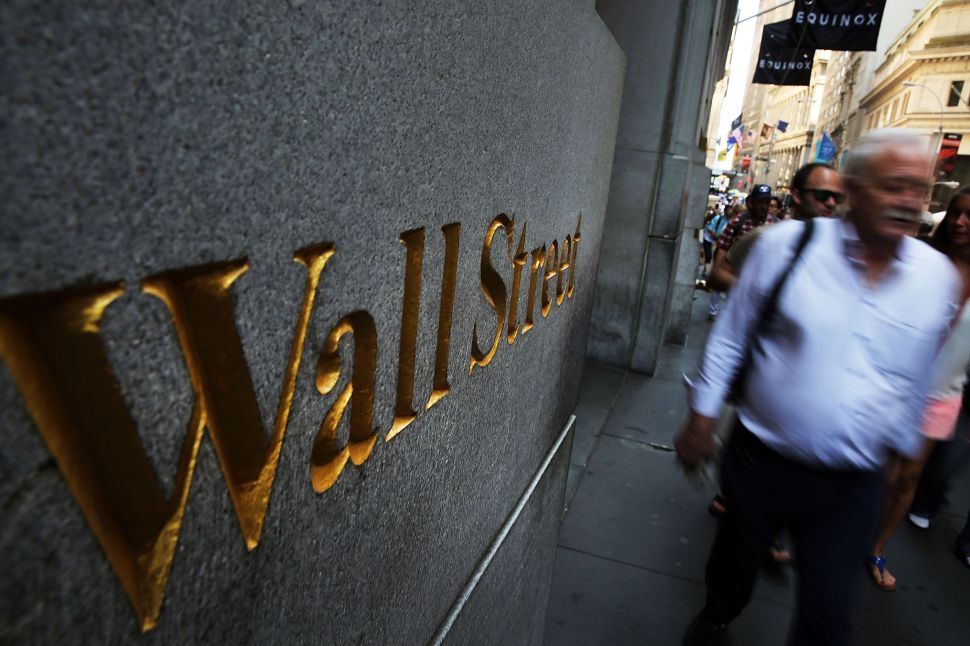