Today is National Coffee Day, and caffeine lovers around the country are lining up to get their free medium dark roast from Dunkin’ Donuts.

But for the more data-minded among us, Square, the company whose registers helped tips “skyrocket” in New York City cafes, marked the holiday by releasing the Square Coffee Report, an in-depth look at coffee trends based on sales figures from thousands of cafes around the country.

Prices for caffeinated beverages also vary widely across the country. A regular coffee costs $2.28 on average in New England, but the price jumps to $2.98 on the Pacific Coast. Tea prices have an even wider range, from $2.40 in New England to $3.08 on the Pacific Coast. And the 16 percent of latte lovers pay a pretty penny for their caffeine habit—prices hover around $3.70 on both coasts.

Given its involvement in the tipping process, it’s no surprise that Square also analyzed tipping practices around the country. The stingiest tippers live in Vermont, giving only a 15 percent gratuity to their baristas. By contrast, North Dakota residents give an average of 21 percent in extra coin.

Square’s final metric was researching the times of day people drink caffeine. While the weekday peak for ordering coffee is about 8:30 AM, on weekends peak time is not until 9:45. Also, while coffee sales markedly decline later in the day, tea sales increase by up to 45 percent after noon. 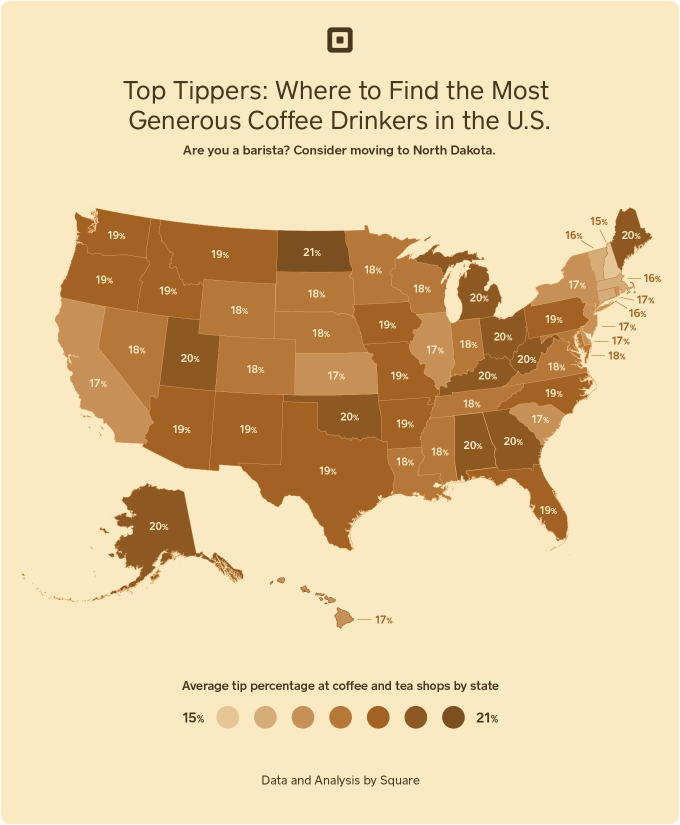