City Comptroller Scott Stringer—rumored to be a potential challenger to Mayor Bill de Blasio in the 2017 Democratic primary—will today attend a soiree in the nation’s capital hosted by a real estate mogul who has already announced his interest in taking on the mayor.

At 5 pm today, Mr. Stringer will attend developer Don Peebles’ “Chairman’s Reception” with members of the Congressional Black Caucus. Mr. Peebles is the chairman and chief executive officer of the Peebles Corporation, the largest African-American-owned real estate company in the country, and a one-time de Blasio donor who recently slammed the mayor as a “socialist” and declared to the New York Post that he was considering a run against him.

Mr. Stringer’s office noted that he will be hitting several events with the Congressional Black Caucus today, and said going to Mr. Peebles’ reception was just another part of that schedule.

“Comptroller Stringer is attending a number of Congressional Black Caucus meetings today in Washington, DC to discuss his broad-based diversity agenda, and detail the ways in which expanding access to economic opportunity benefit New York City, and the nation as whole,” a spokesman told the Observer. “He will be attending the chairman’s reception as part of his participation in the day’s events.”

Mr. Peebles has substantial holdings in Florida, Washington D.C. and New York City, but maintains that his primary residence is in the Big Apple.

Mr. Stringer struggled to attract black voters in his successful 2013 campaign for comptroller, with African-Americans largely supporting former Gov. Eliot Spitzer in the race. After winning office, Mr. Stringer has taken on some issues of special interest to minorities, including alleged mismanagement in the New York City Housing Authority—which is perhaps the reason the latest polls show him with a 54 percent approval rating among African-Americans.

The comptroller has become one of Mr. de Blasio’s few critics in the city government, recently ripping the mayor for his handling of the South Bronx Legionnaire’s disease outbreak and for his failed plan to cap the number of new Uber cars on the streets—which has stoked suspicions Mr. Stringer will seek to unseat the mayor.

One member of the Congressional Black Caucus, Brooklyn Representative Hakeem Jeffries, is also a rumored 2017 rival to Mr. de Blasio. 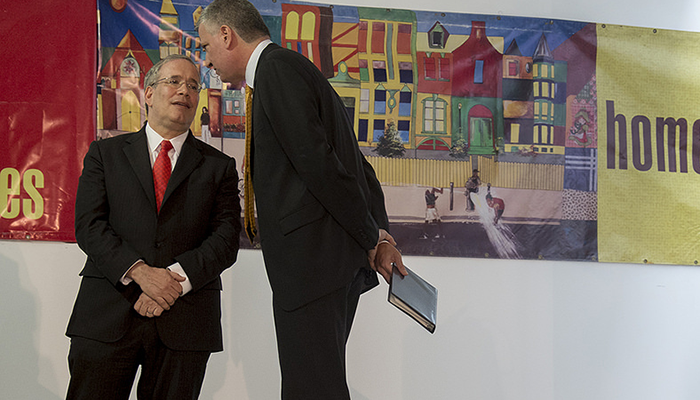