Passing freshmen were in for a different kind of orientation on Tuesday evening, when students, faculty, and Greenwich Village veterans gathered in Washington Square Park to protest NYU’s 2031 expansion plan. Organized by NYUFASP, or NYU Faculty Against the Sexton Plan, the rally hoped to continue grassroots opposition despite disappointment in the courts. The plan would begin with the destruction of Coles Sports center to make room for new classroom space and faculty housing, with construction starting on the University’s two “superblocks” before extending into the larger Greenwich Village area.

Speaker, organizer, and NYU Steinhardt professor Mark Crispin Miller began with a letter of support from Brian Leiter of the University of Chicago Law School.

“The faculty and student uprising at New York University is a remarkable event, without precedent in higher education in the last half century,” he read to the growing crowd. Mr. Miller made a point to illustrate the Professor of Jurisprudence’s credentials, joking: “Not exactly a yippie.” Along with Mr. Miller, leaders from the Student Labor Action Movement (SLAM), the Union of Clerical, Administrative, and Technical Staff at NYU (UCATS), and several adjunct professors addressed their financial hardships, stressing that the “Sexton Plan” would only make matters worse.

Touted by the University as a “long-term strategic framework for growth,” NYU’s plan to add close to 6 million square feet over a 25-year period will cost an estimated 6 billion dollars. This figure has angered students already suffering from their annual bill of 70,974 dollars, with concerns their tuition will only continue to go up. Student’s financial worries are coupled with those of Greenwich Village residents, many of which are NYU faculty, and who worry about how relentless construction might affect their quality of life.

“There’s nothing to be ashamed of in not wanting your own neighborhood to become a nightmare of toxic dust and deafening construction noise,” Mr. Miller explained, predicting that the tall and heavily concentrated buildings would look “like a landscape out of the United Arab Emirates,” a reference to the University’s increasingly global presence. Rally attendees shouted in agreement, with one woman crying: “It’s NYU-Ville!”

Freshman Ahnaf Islam, studying chemistry on a pre-med track, happened to pass by the protest and stayed until the end. He told the Observer he was happy he did, explaining: “There were some very good points, obviously. It’s certainly a lot of money. I don’t think that education should be so expensive.” Mr. Islam also said that he “didn’t really know about the expansion,” and was surprised by the facts presented. When asked if he planned on spreading this new information to his peers, Mr. Islam was adamant.

“Totally—my friend is coming over later and I’m going to tell him everything.” 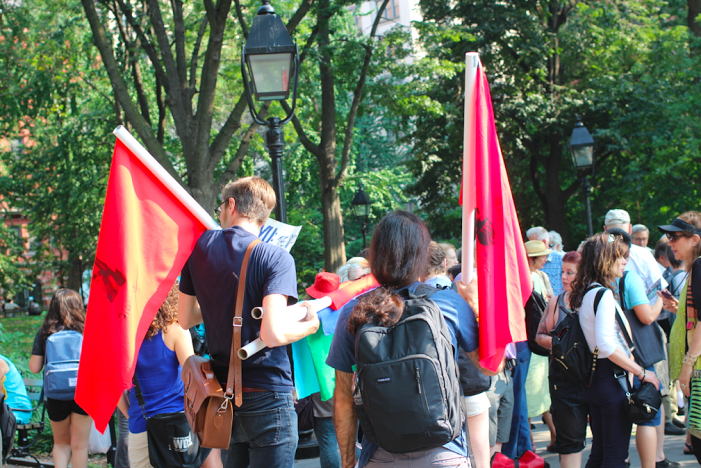