Do you know who’s more likely to buy digital goods? People with computers and Internet connections at home. In other words, people who can afford to pay for access to the Internet, people who are disproportionately better off than those who do all their shopping in physical stores.

That’s one point made in a new report released this morning from the New York City Independent Budget Office called ‘To Tax Or Not To Tax The New Economy?‘ Fundamentally, the report shows that sales of physical media (such as books and albums) is shrinking in New York while New Yorkers are buying more and more of this media via download. Brick-and-mortar stores charge customers sales tax while web stores don’t, which unfairly advantages digital shops. There is an important difference with digital goods, however: they can’t be resold.

If you buy flaming sword of doom in Clash of the Cave Robots, does that count?

The report was prepared by Julie Anna Golebiewski with Johannes Hemker, who estimate that the city is missing out on $21 million in revenue each year by not taxing digital media purchased here. Currently, the city brings in $41 million in tax revenue from physical media, the report says, but that number shrinks appreciably every year as more and more buyers shift to an all digital media diet.

The Observer spoke to a publicly traded digital payments company, Digital River. The company manages payments for many online stores. One of its services is becoming the “seller-of-record” for the companies it works with. In other words, while the revenue ultimately goes to its clients for what they sell, for all intents and purposes, if you bought a song from a Digital River client, the taxing authority sees Digital River as the seller, and it handles paying the taxes.

When a city or state creates a new taxing rule or updates an old one, that puts a burden on companies and businesses that handle payments, according to Eric Christensen, a Digital River associate vice president. “There’s definitely a fair amount of work tied to it,” he explained. Updating product categories, for example, to make sure they fit the different definitions across states and municipalities. Updating the front end to show consumers the right tax amount and the back end to make sure the company pays the taxing authority correctly when taxes come due. “You have to make sure your tax system is always up to date with the changing laws that are happening,” he said.

That this work isn’t routine for a large company is something political leaders should keep in mind as they consider imposing a tax that will impact new businesses here, some of whom will not be ready at first to bring in a company like Digital River to take over sales.

Here are some of the report’s big takeaways:

The report appears to come down on the side of finding a way to tax at least some digital goods, but it does so gently. A few times, it returns to a question that the Observer covered recently: the problem of being able to resell digital products. The block chain may solve that problem if Imogen Heap has her way. In its conclusion, the report writes:

Mr. Christensen said that he wasn’t aware of a city or state that ever came to Digital River to discuss crafting a digital sales tax law that wouldn’t be too onerous for online businesses. “You’ve got to make sure you are weighing the impact on the customer’s user experience,” he said.

Whatever the city does as it edges into these waters, it has to be sure it doesn’t do so in a tin eared way. Taxes need to be introduced in a way that doesn’t make it an impediment for freelancers and small companies to start new businesses, just as the digital economy is driving so much growth here.

The Observer is reaching out to sources on city council to determine whether or not taxing downloaded media is an active conversation there.

A few years ago, Philadelphia started cracking down on bloggers who filed Federal income taxes, because the city has always taxed income earned within the city. It got called “the blogger tax” in the media. It wasn’t, really, but it looked that way. It made the city seem like a hostile place to online ventures. The de Blasio administration should be sure to go out of its way not to come off so tin eared as the administration of Philadelphia Mayor Michael Nutter did at the time.

If the city moves toward taxing digital products, there will be outcry, regardless, but if city hall were to work with third party payments companies and freelancers up front to find ways to make the work less onerous, that could go a long way toward bringing in the revenue without making the bookkeeping so painful that digital artists don’t even want to open up shop. 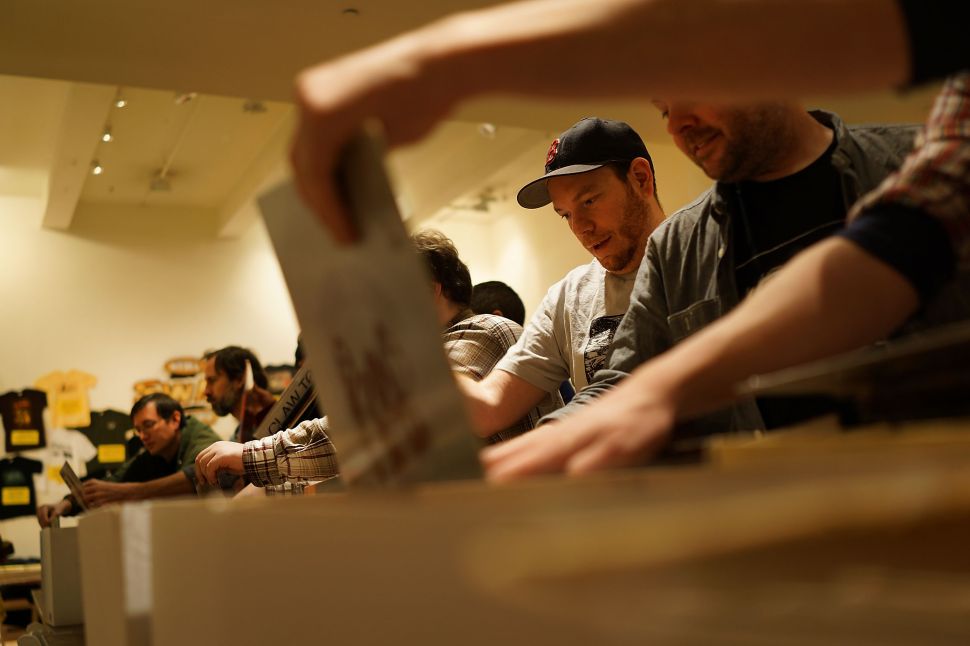