It’s been one week since we met Wilkin Brattle and the 12 other people who live in 14th century England. To catch you all up to speed: we last we saw Wilkin when he cut off a guy’s head after assuming the identity of a traveling executioner as part of a plot to avenge his pregnant wife, who was actually killed by a The Dark Mute. The Dark Mute’s wife Annora is encouraging him to get revenge on the wrong people, as part of an unclear mystical plot.

We pick up in this week’s episode with Brattle making incisions into a pig. Brattle says “I can’t do this”, to which Annora says some crap about destiny. Jump cut to a sculptor and his apprentice making a sculpture of Baron Ventris, who was slain in the previous episode. The sculptor reprimands his apprentice, “too much force.” That’s what I call foreshadowing, baby. Expect a major subplot about sculptures later.

Now back to Annora and The Dark Mute. Annorra bemoans that Brattle is lost and confused, but The Dark Mute retorts that they were too one at one time. He’s carving a pathetically small piece of wood while living in some sort of cave tree, neither of which are really proving his point. Yeah, you two a real success, bud.

Brattle’s gang of dirty guys get into an indecipherable argument about an offscreen dirty guy who’s gone missing. The sound mixing was really bad during this scene, but it may have been on purpose, to add to the mystery. The argument devolves into a different argument, this one about revenge. From what I gather, they disagree about what rate they’re supposed to get revenge at. Anyway, we immediately go on to see a rebel girl get captured by some soldiers in a failed ambush.

Brattle returns home from his long day of forrest arguments to his fake wife, who is actually the widow of the traveling executioner whose identity he assumed in the last episode. She maintains that she is his wife and loves him, while Brattle chides her that keeping up this farce will put her in danger. Our hero’s trademark loud whisper is interrupted when he’s summoned to Castle Ventris to do some Bastard Executing.

Milus Corbett interrupts Baroness Ventris and Father Ruskin’s whispery conversation to inform her they’ve captured another rebel (the girl captured in the scene before last). Milus, a crime and punishment conservative, would like to put the girl in a barrel of spikes and have a really fat guy sit on it, while Baroness Ventris, an idealist lib, would like to give her a medal. There’s a quick scene where some dudes find an dead guy, then immediately we get back to Brattle. He’s now in the dungeon with the rebel girl. Ventris’ underlings want him to torture her to find out the rebel leader’s identity. Brattle admonishes her “this isn’t a game!” a line he picked up from the popular “outgoing message” skits from DMX’s “It’s Dark And Hell Is Hot”. He’s reluctant as he’s not a real torturer, and wants her to give up the information. She refuses. He ends up cutting her finger off. Baroness Ventris and Corbett are sent to see her. The Baroness dismisses everyone so she politely asks for the rebel leader’s identity. The rebel girl again refuses, and says the Welsh will take back England. In the course of the conversation, the Baroness has determined what village she’s from. She wants to go there to diplomatically resolve all this, while Corbett has trouble concealing his erection at the thought of making another corpse pile.

Now, we’re back to the dead guy in the forrest. Annora is doing witch crap to him, and pours what looks like ramen broth on his chest. Smoke rises, and she pulls a snake from his mouth. This is actually exactly what socialized medicine is like.

The Baroness has made her way to the rebel girl’s village. She continues her ruthless campaign of politely asking who the rebel leader is. The girl’s mom refuses. Brattle finds the girl’s brother and tells her she will be put to death for treason unless he gives up the information.  After making the little nerd cry, Brattle is given the location of a rebel weapon cache.

The Baroness’ caravan is attacked by rebels on their way back from the village. Corbett destroys some of them. Father Ruskin, Brattle, and Brattle’s pal do their fair share after securing the Baroness. Brattle and his friend use nonlethal methods, while everyone else cuts throats. Back at the castle, Corbett once again demands the Baroness Ventris murder everyone in England again. The Baroness refuses. Father Ruskin and Brattle have a weird conversation about conscience, where Brattle remarks that the good father is too good at fighting for a priest. Damn, two dudes with mysterious Dark Pasts in one room? I’m getting my money’s worth. The Baroness enters right as Ruskin leaves, and compliments Brattle on his swordsmanship. It’s implied during this part that they are becoming horny for one another, which the Baroness dampens by telling him he has to execute the rebel girl. Brattle, already upset at the extinguished sexual tension, receives a ghostly vision of his wife who tells him to stop looking for what’s wrong in the world and that what’s right is within his grasp. Immediately after, a CGI snake crawls up his hand and strangles him, then disappears, which is a great conclusion to a mindfulness lecture.

He rushes to Annora’s cave and yells at her about his dark visions. She tells him they’re actually good. The guy who has sex with sheep (sorry, I identified him as a woman last recap) shows up for no reason. Annora then instructs Brattle to have the girl drink some mysterious potion before he executes her.

In the following scene, Brattle gives the condemned girl the Cucumber Gatorade Annora gave him. Corbett enters and tells Brattle not to defy him. Brattle basically calls him a pussy. Corbett retorts that he could get his fake family killed because he knows his secret, that he’s not really the traveling punisher.

We’re treated to a gratuitously-paced execution scene, backed by a diegetic hymn. Brattle cuts off her nose for unclear reasons. Back in the cave, Annora thanks The Dark Mute for a snake, then looks weirdly at a cage. There’s a cool scene where Corbett has a threeway while clasping a straw effigy of a man, which symbolizes man’s duality or some shit. Baroness Ventris is brought a Bible, which has a seashell in it for whatever reason.

Finally, we’re in a tavern. Ventris’ troops ask Brattle about his skills, which surely came from battle, but even more assuredly from a Dark Past. During the course of the conversation, Brattle and his friend determine the men they were talking to sacked their village in the first episode. They mumble to each other ominously, then it’s implied one of the bad guys is about to have sex.

While this episode had a pointless sex scene and some cool kills, there wasn’t any pathological sexualized violence, nor did Kurt Sutter’s self-insert character got horribly maimed. However, there was a murder scene backed by a song performance (possibly by Katy Sagal) and he gets points for that. On a scale of 1-10 Sutters, I give this a 5.4 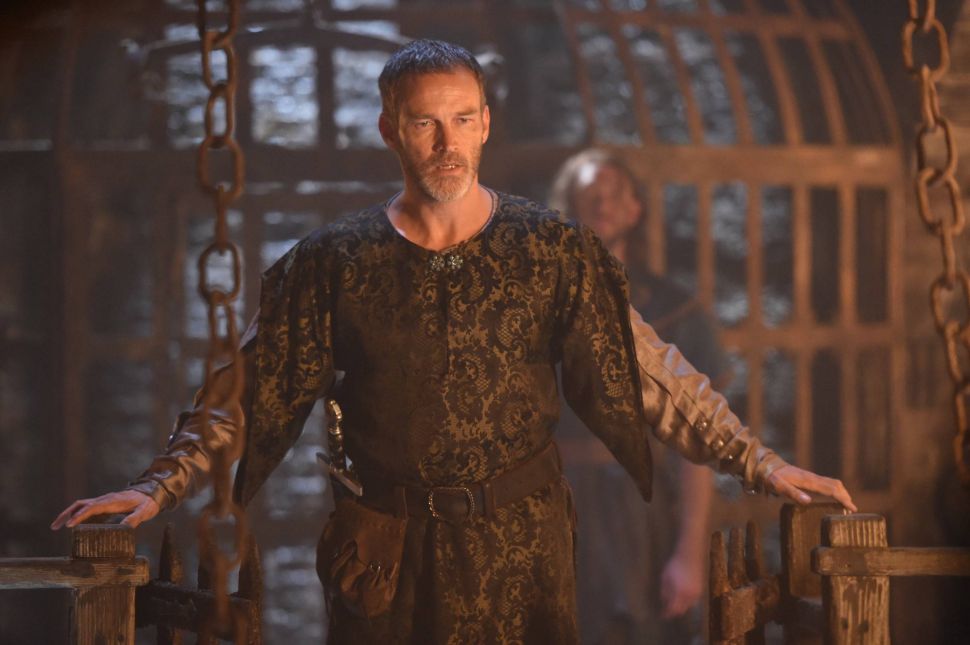