This week’s Bastard Executioner starts off with a bang. I mean, actually it starts off with some fleeting shots of Annora the witch and Milus Corbett, but we’re immediately treated to a cool massacre of a some old religious dude’s house who we’ve never seen before, by other guys we haven’t really seen. One of the armored assailants peals back his victim’s shirts, revealing insanely badass tattoos. We cut back to Annora, who is naked, showing off her Avenged Sevenfold tattoos that are quite similar to that of the assaulted old man’s.

Elder abuse is a tough act to follow, but we return to Brattle’s house. Brattle’s fake wife is demanding that they be closer as a couple. Brattle says he’ll learn to, but I hope he’s lying because I have a lot invested in an asexual TV protagonist. From their conversation, the wife insists that they have always been married and Brattle really is the guy he’s posing as, out of fear.

Milus is already engaged in a plot with the visiting Baron Price. Seeing as they need money and Price is rich, Milus would like Price to buy their shire, and marry Baroness Ventris, retaining Milus as Castle Slimeball. Baron Price, who looks like medieval Nick Nolte, considers it.

Back at Edward’s castle, we have the Baroness and her hairbrusher. In a thrilling parallel plot, the king is late to their meeting and they’re really hungry.

We’re back to Brattle! The hero himself asks his fake son to bring him the Bible, and says Exodus is “one of my favorite books” just as convincingly as when John Kerry said “whom amongst us does not enjoy NASCAR?”. The kid slips up and refers to his actual father while explaining he can’t read because he is stupid. Brattle says it’s fine, and promises to teach him to read because he’s “one of the brightest boys” he’s ever met, as long as he calms down his mother’s fears. Two things: Brattle clearly hasn’t met too many kids in gifted programs in Wales cause this kid isn’t lighting the room on fire or anything. Secondly, these two, because of the goodness in their hearts, are completely doomed. The only kind-hearted person in Sutterland who gets to live is The Dark Protagonist.

There’s a confusing scene in a forrest where Brattle’s Moorish friend tell the guy who screws sheep and a fat guy to leave because they’re children and not man enough to defend their revenge fort. Just gonna be honest, I have no idea what this was about. We’re back to the old man and his torture. The priest and Ed Sheeran have determined that he was carrying three Aramaic texts, but they are untranslatable. They presumably did not deduce this from enhanced interrogation, as their subject just gets redder and screamier while not even revealing the meaning behind his ink. We get a conclusion to the Baroness’ dinner fiasco as she and her handmaiden steal a bunch of the king’s fruit. This is subtext.

Brattle’s guys from the previous confusing scene in the forrest are captured.

There’s a tournament where Brattle beats the shit out of all Baron Price’s knights, cause of course he does. Corbett brags to a knight that Maddox (the guy whose identity Brattle assumed and is currently posing as) isn’t even a knight, but their punisher. The knight challenges Brattle, coyly saying Maddox’s name, which results in Brattle nearly killing him. During this event, Milus gifted two prostitutes to Price, a must in any business deal regardless of time or place.

After a brief scene where Baroness Ventris argues with the king about the partitioning of their shire, we’re back to Milus and Brattle. The knight that Brattle beat up is on the floor, presumably drugged. Milus explains that since he knew about their ruse, they should kill him and make it look like an accident. Brattle rages at him, then ends up murdering the drugged guy by stuffing chicken down his throat in a poignant commentary about foie gras. Milus reveals the rest of Price’s party locked away in another room of the dungeon, and says he’ll accuse them of murdering their companion in a Satanic ritual if they don’t go along with the story. Brattle solemnly complains that they’re innocent, as if Milus legitimately thought they killed their friend because they listened to Motley Crüe.

The king tells the Baroness he will partition their shire, to which she glumly accepts. There’s a weird scene where Annora is naked again, and crosses off a symbol on a canvas. It made me believe that it wasn’t an actual production scene, but Katy Sagal and Kurt Sutter’s storyboarding process. Finally, Brattle returns him to find his fake wife trying to burn his stepson with a knife like Maddox used to. She claims they deserve it to purify them for their misdeeds. Brattle looks distraught, and we’re finished for the week.

The pacing of this episode actually wasn’t too bad. There were still a bunch of things that were way more confusing than they should have been, but it was overall easier to follow than the previous ones.

However, it did reveal an inherent problem with The Bastard Executioner: the lopsided “gritty realism” meter. Let me explain: the main character, Wilkin Brattle, is a perfect Sutter protagonist. He’s a kind, laconic man with a dark past. He goes above and beyond to do the right thing by people through some internal moral code. To balance out the improbably good hero, we get gratuitous throat slashing. We get every other character as either a sociopathic sex maniac, an inhuman schemer, or a doe-eyed innocent we know for a fact will be shoved into the meat grinder to provide more pathos for our hero. The goodness of the central character is the result of the entire world’s sacrifice. “It takes a real bunch of fucked up sons of bitches to create a bastard who actually has a good heart,” Kurt Sutter might say. The result is a world that’s just confusing plot after confusing plot, where every character on the side of light is a blithering dunderhead and just when you think you’ve got a handle on things, there’s a forrest massacre. It’s tiring, but whatever! I’ll still watch. 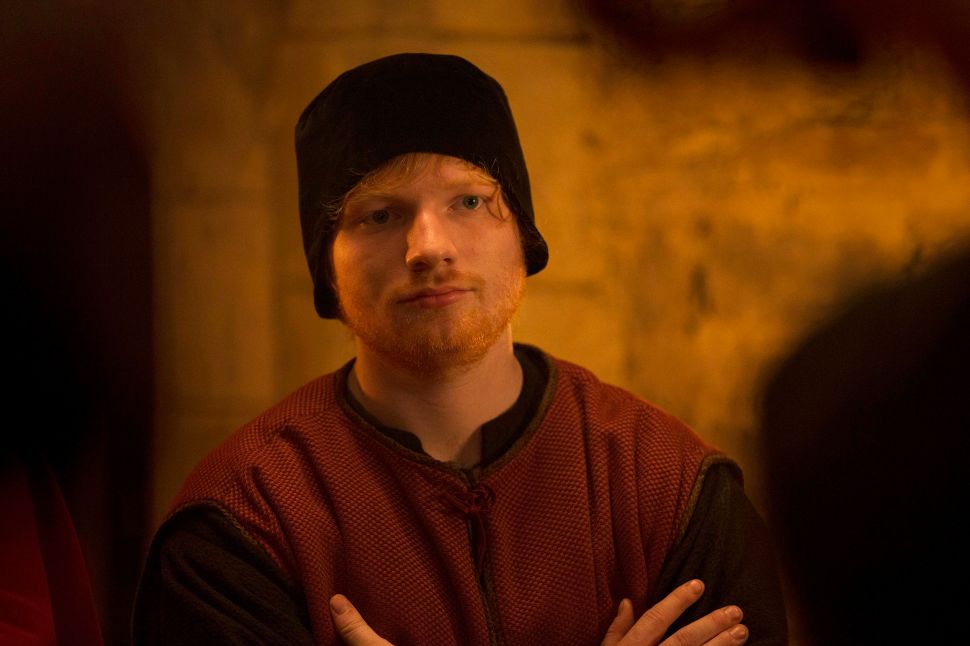