Kurt Sutter has done it again. He’s made a new show. No one can stop this man from making shows. They tried, but The Bastard Executioner is a reality.

The show follows Wilkin Brattle, (Lee Jones) who wasn’t a real historical figure but is probably the name of a Vine star. Our two hour pilot starts out with some title cards explaining the oppression of the Welsh peasants under the tyranny of King Edward II, then straight into Brattle during a flashback. He writhes wounded on the battlefield, before a white haired child tells him to “lay down the sword of battle” so he can meet some type of destiny. A CGI dragon pops out of a dead friend’s wound. Brattle wakes up in a cold sweat then….is totally fine. He just jokes around with his pregnant wife Petra (Ellen Rhys) about some Slavic witch that hangs out in the village. If this is actually what PTSD is, maybe our VA hospitals underfunded. Jump cut to Baron Ventris (Brian F. O’Byrne) performing the world’s slowest doggystyle on Baroness Ventris (Flora Spencer-Longhurst) in his castle. He mumbles about how terrible England is. No shit, pal! Anyway, back to the village.

The couple see the aforementioned Slavic witch Annora (Katey Seagal), who says something about destiny to of course, the Kurt Sutter self-insert The Dark Mute. The Dark Mute just trembles and hands his real-life wife indecipherable notes. Brattle and Petra then run into a white person with dreadlocks (apparently the brutal regime of King Edward didn’t even care about cultural appropriation). This latter interaction is weird. M’Lady Music Festival Hair is yelling at her sheep about how all it does is eat and sleep and Brattle replies “well, it is a sheep.” Welsh Kylie Jenner realizes this and then hugs it. That’s the kind of man Brattle is, I guess. He’s not afraid to call a sheep a sheep. Some guy from Brattle’s village comes to tell him about how they’re going to raise taxes and that they need to rise up. Brattle’s wife tells him not to, but you can tell he’s already thinking about his lucrative CPAC speech for when he kills a tax collector. We then cut to see a guy with a cross marked on under his cheek, presumably because he is a big Fredo Santana fan. He’s torturing some dude at behest of Ventris by poking at his back, then hits his own kid because he had to fulfill his evil quota for that day. During this scene I shouted “is that the Bastard Executioner?”. Well, it isn’t.

After this, Milus Corbett (Stephen Moyer) walks around a courtyard plotting with his simple brother Randolph (Martin McCann) and Ventirs, who’s the actual baron of Wherever. They talk about their tax hike as part of a genius plan to get more money from taxes. During the course of their conversation, it’s implied King Edward II is gay for some reason. It’s established here that Corbett is a scheming, ambitious noble, and he’s jealous of small business owners’ success.

Alright, now it’s time for action! Brattle’s gang of patriots, oafs, buffoons, louts, grotesques, and braggarts bravely attack the tax collectors while they’re circle jerking around a fire. Predictably, they completely own them. They all decide to sleep there, and Brattle has another dark flashback to his battle, where it’s explained that Baron Ventris set up Brattle’s troops to be destroyed by Edward. We see Ventris immediately after. He finds out his IRS thugs were killed by guys who wear potato sacks as clothes and gets very pissed off. He decides to attack Brattle’s village. Later, Corbett and Baroness Ventris argue. Corbett is really pro villager murder. Baroness Ventris is opposed. Personally, I was just glad to see civility among disagreement in politics.

Baron Ventris and Corbett, along with their troops, murder every single wife, child, and elderly family member of the still-absent raiding party. In true Kurt Sutter fashion, Petra flees from the village, is caught, spared, then gratuitously stabbed through her pregnant gut by an unseen guy with a fancy dagger. Whoever stabbed her then dabs a finger onto her uterus and makes a cross on her forehead. Man, these people love crosses. In the next scene, the executioner guy from earlier punches his wife in the stomach for no reason. Immediately after that, Brattle’s raiding party the pile of bodies from the massacre the night before in their village, with Brattle’s wife, dead fetus leaking out of her gut in full detail, right on top. This trifecta is known as a Sutter Hat Trick. If his self-played character lost an eye and got diagnosed with AIDS in the next scene, he would be the Wayne Gretzky of being Kurt Sutter.

Brattle tells everyone, whose wives, kids, and parents were also massacred that this is his fight alone. When they inform him that he’s a dick he says he has a plan, and they go off on their horses. There’s a scene where the executioner guy screams at a blade while totally alone, then gets enlisted to join Ventris to take up arms against Brattle’s raiding party. Ventris meets Brattle’s group, and brings up the battle that he thought he died at years ago. Brattle’s men go on to destroy Ventris’ troops, including the executioner guy. Brattle corners Ventris and starts beating the shit out of him, but gets stabbed in the stomach. Another village guy stabs Ventris through the skull. While Braddock is recovering from his wound, Annora burns a cross on his cheek just like the bad dad executioner. We cut back to Corbett mumbling in a castle, then back to Annora and Brattle. Brattle is told that he has a destiny. He says it’s all over, but Annora says his story has just begun. Given that this show takes place in the 13th century, this was only the 5 billionth time someone said this.

Brattle, now wearing a leather tank top because he was signed to the NBA in 1995 before this scene, leads his men with the corpses of Ventris and company in tow. Brattle basically goes “uh, we found them like this”, while pretending to be the executioner. Dumbass Randolph declares that Brattle is lying because he was at the battle and saw Brattle, but the executioner’s wife and kid embrace Brattle, to sell the lie. Corbett states that his brother is either lying or a desert, and that both are punishable by death.

Brattle and Baroness Ventris have an intimate conversation about his scars while he’s doing a devotion in the church. Corbett leers at them. He then meets with the baroness to state that the new executioner will be good, because he can use him to take a “tough on rebels” stance, similar to the one that got Bill Clinton elected in 1992. Immediately, he gives Brattle his first executioning job: Randolph.

We see The Dark Mute and Annora again. The Dark Mute is scarred to the point where he looks like a sharpei. I am not accusing Kurt Sutter of having a weird fetish where he must play characters that get horrifically maimed to get off, but if he did, the results would be indistinguishable from our current reality. We’re cheated out of the sex scene of the century when the camera cuts to a detailed blade, which, you ready? You sitting down, bud? It’s the one that Petra got stabbed with!

The show ends with Brattle executing the slowest noble in Englandshire. Shocker: he’s really good at it. He takes off Randolph’s head in one swing. If this was Friday Night Lights, everyone would have cheered at how good he is at his sport and a post-rock song would have played. Instead, we’re in The Bastard Executioner, so we get a close up of Brattle’s face with a determined grimace that says “I’m ready for the foreboding stuff”.

My verdict on the pilot is that while I had no idea who some character were, felt that many lacked any coherent motivation, and there were things that simply didn’t need to be there, I was weirdly compelled to see what happens next. However, my brain has been destroyed by online irony and combat sports. Chances are that you, the reader, have received a completely acceptable amount of mental trauma in your lifetimes. You may find the absurd violence and convoluted/stupid scheming objectionable compared to your favorite show, House of Congress. Well, if you still want to know about the bastard’s hijinks, I’ve got you covered. 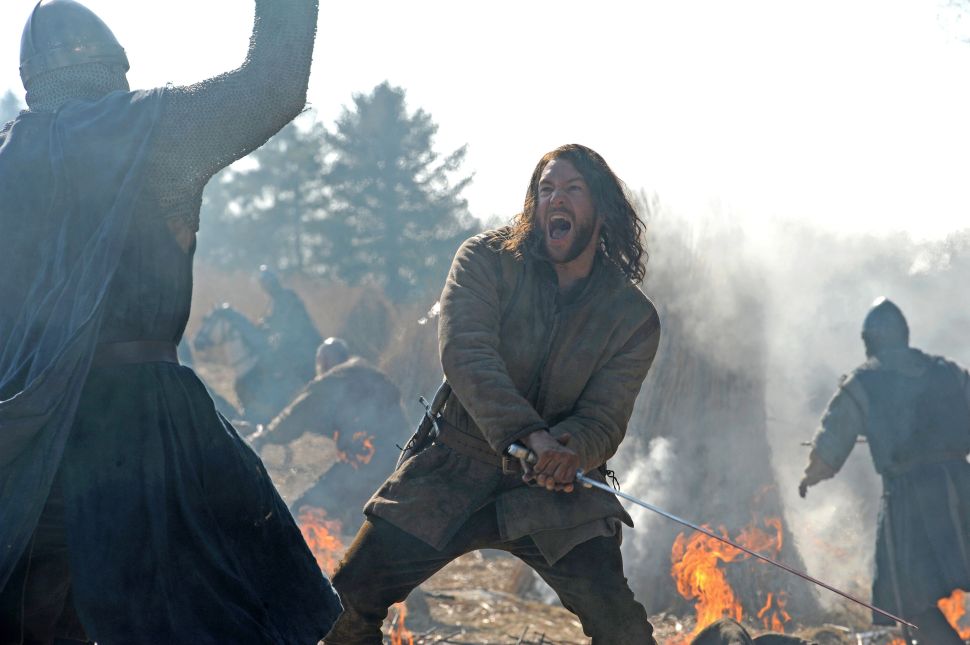