Brooklyn Magazine released their annual list this morning of 30 people who live in Brooklyn, do something Brooklyn-creative cool, and have been alive for less than three decades.

“Don’t be jealous of the people on this list, they’re just better than you,” read the not-very-subtle subhead of a package described as “the envy index.”

“Every year we put out a list of the young, creative people in Brooklyn who are accomplishing the kinds of things that would be impressive at any age but are all-the-more noteworthy considering the fact that these people are, you know, not very old at all,” the intro to the feature explained, more diplomatically.

Now, we ourselves are no stranger to the appeal of producing a completely arbitrary power list filled with people whose power is perhaps best demonstrated by the amount of congratulations tweets that accompany their inclusion on said list.

And we have nothing against any of the people on this list (congrats, guys!). We also recognize the strategic maneuvering required in social media-ing about it without being annoying. In fact, we admire the way that these 30 people, or at least the ones we follow on one platform or another, managed to broadcast it on social media without seeming like jerks. The art of the humble brag really does require a delicate touch (good job, guys!).

And to everyone who didn’t make the list as a result of age or lack of accomplishment, well, your self-deprecating tweets are funny, too! You would totally make our completely hypothetical list of 30 Not on Brooklyn Magazine‘s Under 30.

As for those of us who are no longer eligible, isn’t it kind of a relief? Being 20-something is stressful no matter what. The 30s are a time when the stress of real life replaces the free floating anxiety of youth, or at least that’s what people tell us.

But really, the best part about being in your 30s is that you age out of the possibility of being on a 30 under 30 list. 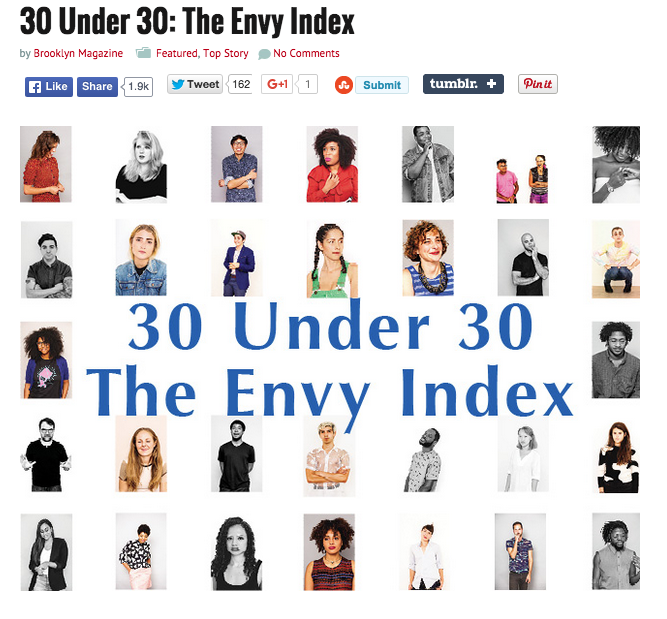