It was 1993 when Craig decided to change careers. 17 years at IBM and it was time for a shakeup. Charles Schwab came calling from across the country in San Francisco.

Craig was 40 and starting over. The job kept him busy, but he’d make time to for local programming events where he met others in his field and kept track of what was going on in the industry. Pretty soon, he was a regular at the meetups and thought, “Hey, there should be a way for everyone to keep up with what’s going on.”

As a software developer, Craig was a techie, so he started an email list where he and his friends could update each other about different events going on in town.

It was a hit and lots of people started using it. It was perfect for Craig—a fun side project that didn’t take too much work. He spent his days banging out work for Charles Schwab and his evenings managing “the list.”

After a while, people started posting about other things. When someone was moving, they’d notify everyone their apartment was available and maybe sell some of their furniture. They bought cars from each other and listed jobs for their employers.

When there got to be too many emails crowding everyone’s inboxes, Craig decided to make a change. He shut down the email list and moved everything to a website.

Picking the name for the URL was easy—Craigslist. And, as a fun and rewarding side project, he kept working his day job for three more years before thinking, “Hey, I could probably do this Craigslist thing full-time.”

Craigslist is one of my favorite side project turned megahit stories, but there are many more like it. More importantly, there are millions of successful businesses you’ve never heard of that were built in someone’s spare time.

If you’ve ever had a big idea and thought, “There’s no way I can make time for it,” there are a lot of real-life stories that say, “Yes, you can.”

You can build big things in your spare time. Here’s how to do it.

When I was in college, I used Craigslist to launch my own side projects. I loved doing business-y things, and it was the perfect platform for a broke student to test out entrepreneurship while immersed in school work.

I liked music so, for a while, I bought and sold concert tickets. I was addicted to guitars I couldn’t afford, so I’d buy used ones, fix them up a little, and sell them for a profit.

Either of these projects could have scaled into bigger businesses, but they didn’t have to. I was having fun and I wasn’t starving.

But say you do want your small thing to become big and you can’t make it a full-time effort right from the start. What then?

Here are the lessons pioneered by very smart people who built big things from humble beginnings.

1. Start with what you already know.

Craigslist worked because Craig was building something he already knew how to do. He spent 17 years as a software developer before most people even knew what software was, and he was an avid user of email servers.

When you’re starting something with limited time, success depends on the focus you give to things that will make your unique idea work. The skills you need to build it should already be in place. 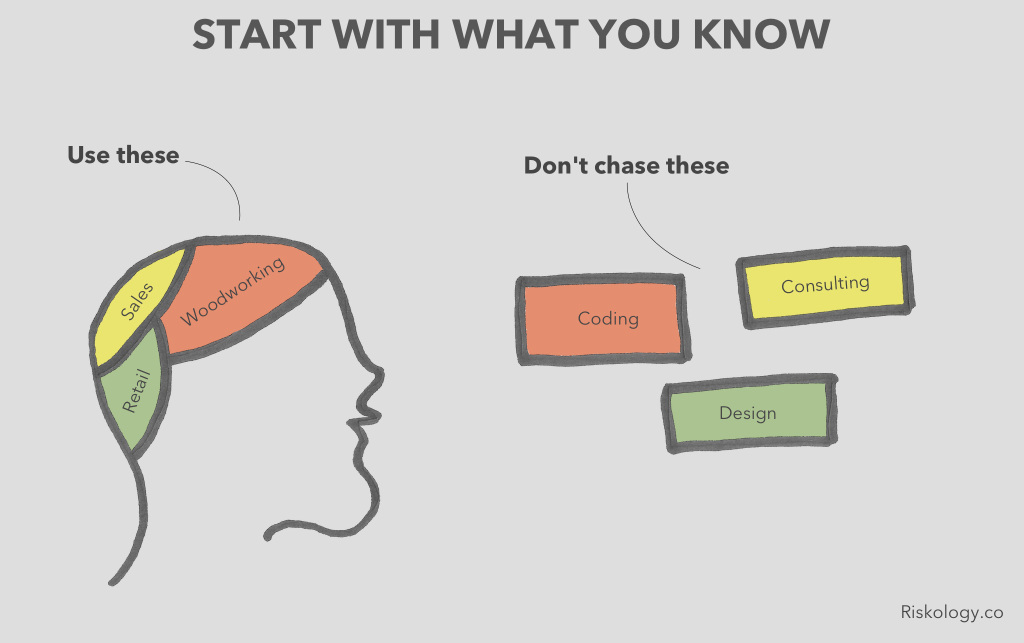 There will be plenty more to learn along the way, and you’ll be pressed for time at every turn. Don’t weigh yourself down by having to learn a whole new fundamental skill.

Another shining example of this principle is Gibson Guitars. Orville Gibson was a salesman in the 1800s who simply enjoyed finding new ways to build better instruments. By the time he was ready to launch his business, all he had to focus on was monetizing. He’d already figured out how to build the world’s greatest guitars.

How simple can a business be before it ceases to be a business at all? Pretty simple, it turns out.

Michael J. Kittredge was a broke high school student scrambling to create a Christmas gift for his mom. The idea he settled on was a colorful candle. The ingredients? Some wax, a red Crayon, and a milk carton.

Before he could even give the candle to his mom, a neighbor saw it and convinced him to sell it to her. He used the money from that to make two more—one for Mom and one to sell. A side business was born—The Yankee Candle Company. 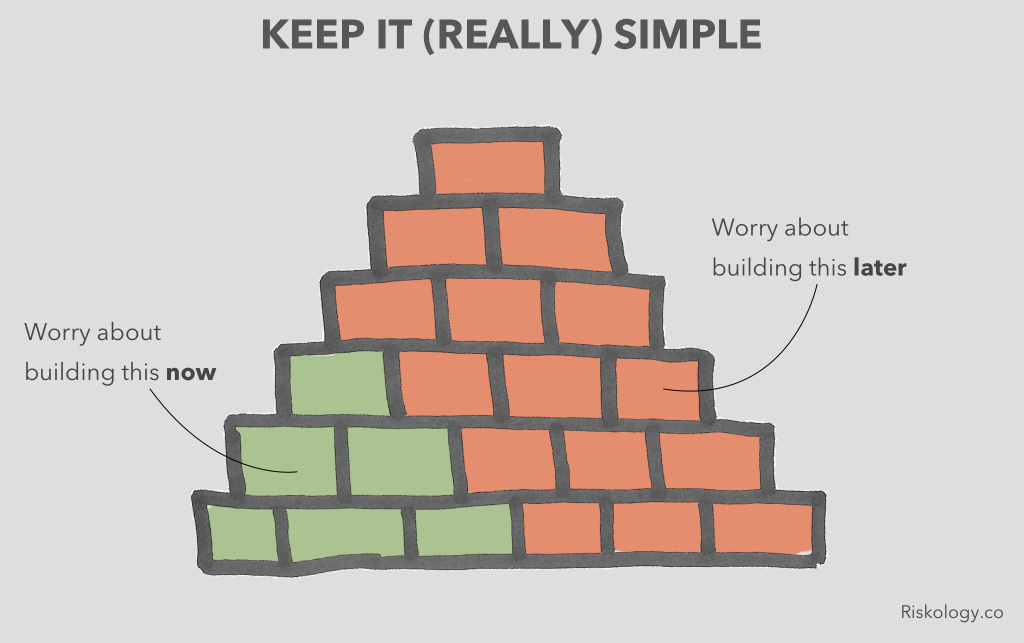 Kittredge was eventually able to open a small retail shop in his hometown and fund it with the earnings from a part-time job. And that’s the way it stayed for several years until he could hire more employees.

The Yankee Candle Company has been bought and sold by investors several times since Kittridge started it. The last purchase price was about $1.6 billion—just a little bigger than it was when it started in his parents’ kitchen.

Today, it’s still a simple business. They make candles and that’s pretty much it. Surely you can make something as complex as a candle, no?

The most critical thing you can do starting any new project is focus and find the small actions that have a big impact. When you’re busy working on other things, you don’t have the luxury of spreading your energy over a lot of different fronts. You have to find what works and hammer on it. When that stops working, you have to shift your strategy and do it all over again.

When Blake Mycoskie started the TOMs shoe brand from his apartment in LA, he was already busy working full-time on another company. He took the little spare time he had each day and would send emails or make phone calls to shoe stores trying to find buyers who’d sell his design.

It didn’t work. He spun his wheels for weeks without traction. Then, one day, he carved out a few hours and took his shoe down to a local retailer to meet the buyer in person. He walked in, told his story and, almost immediately, had his first customer. 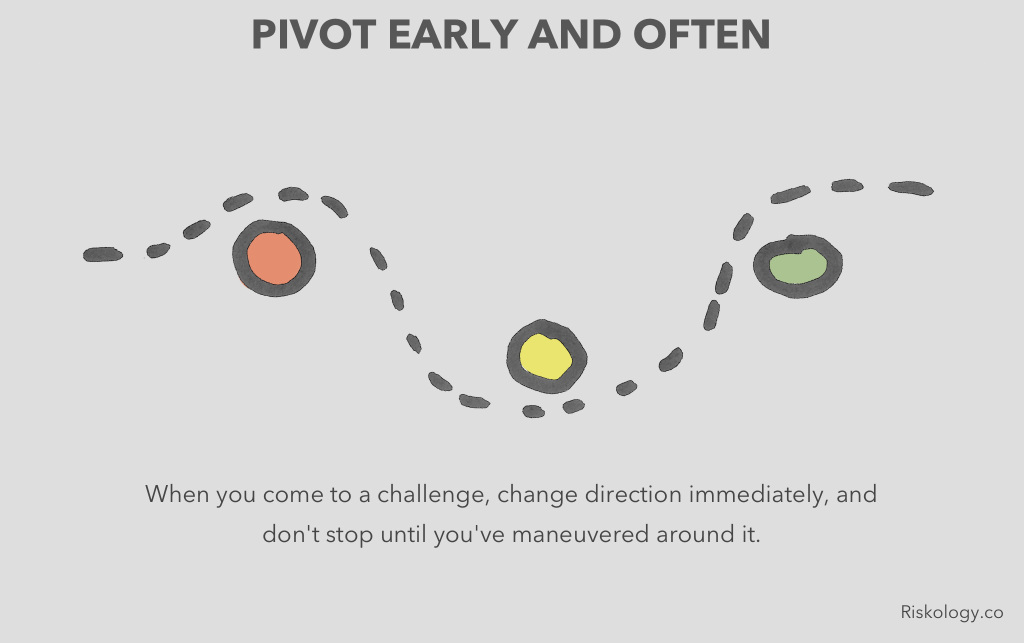 Some businesses can succeed by making cold calls during the spare moments of a day. But TOMs couldn’t operate like that. What Blake learned was the story behind his business was just as important as the shoe itself, and the best way to tell that story was in person.

The answer to Blake’s sales problem was easy. Instead of spending 30 minutes each day sending emails to potential customers, he could block off one 2-hour chunk to meet in person and find far better success.

If you’re struggling with something in your own part-time project, it’s time to pivot. In fact, you don’t have the time not to.

4. Make your boss your investor.

When you think about starting your own big thing, you probably don’t think about doing it as part of your day job. But what if you did? If you want to start something that’s going to take a team and a significant investment of both time and money, what’s one asset you have at your immediate disposal that could offer all that and more? What about the company you work for?

Whether you go this route or not will depend on the culture of the company you work for, but if you have a good job with a company that values creativity and entrepreneurship, is there a way you could mold your idea to fit with the mission of what you’re already doing and get your whole team on board?

In 2006, Jack Dorsey had the idea for a text messaging service that would let you keep tabs on your friends. The only problem was, he had a busy day job working at a podcasting company called Odeo.

But Odeo had a problem. Apple was ramping up its podcasting game and moving in on Odeo’s territory. The company’s leadership wasn’t ready to throw in the towel, but they needed fresh ideas for new business opportunities. Jack pitched his.

They gave him a small team, a little time, and a few resources to build it. He still had to do his normal day job stuff, but now he had resources at work to help build his vision.

Thanks to the time, money, and human resources Odeo gave Jack and the team, they were able to quickly create a prototype. When it was ready for testing, Jack sent out the very first message:

The rest, as they say is history.

Don’t immediately dismiss the idea of building your business or side project with the help of your day job.

Do This In The Next 10 Minutes

If you think that starting a big, important project in your spare time is simply out of the question, you’re hardly alone. But, as you’ve seen, some of the greatest businesses and social projects of our time (and times past) were started exactly that way.

The real lesson from these stories is that success doesn’t depend on how much time you have but on what you do with that time.

To recap, what you should do are these four things:

Now, I want you to ask yourself just one question:

What’s a small but high impact action you can take to get started or improve your big project today?

Ask yourself this question today, tomorrow and every day after and you’ll be amazed at what you can build with a busy schedule.

Tyler Tervooren founded Riskology.co, where he shares research and insights about mastering your psychology by taking smarter risks. For more, join his Smart Riskologist Newsletter. Emily Lundberg greatly contributed to this article. 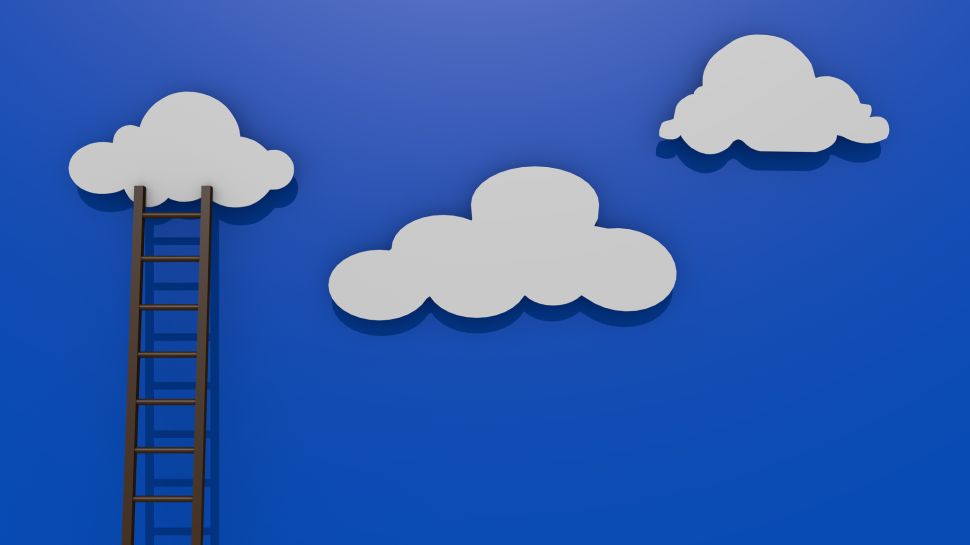