Hell looked like a bus station in the former Soviet Union. And Tim Burton was enormously surprised to find himself there.

The famous director stood in front of a counter covered in wood-patterned wallpaper; he picked absentmindedly at the nearest edge. On a wall behind the shabby desk hung a large, framed portrait of Roy Cohn and a smaller photograph of Joseph Kennedy fellating Aleister Crowley. Two bells sat on the counter. One was labeled “Ring This,” and the other one was marked “Not This One.” Burton rang both, for three days.

Finally, a tall gentleman appeared. He had shoulder-length hair and was wearing a faded T-shirt that said “L.A. Guns Europe ’92.”

‘An extreme—indeed, hysterical and unbalanced—love of Steely Dan should never, ever be the root basis for a new wave band, much less an extensive catalog of movie scores.’

“Ah…no need to introduce yourself, I know exactly who you are. My name is Hoover. I used to do monitors at the House of Blues on the Sunset Strip in Los Angeles. Every musician who came through that place for 15 years told me to go to Hell. So here I am. I am The Under Assistant Devil for Entertainment-Related Atrocities.”

Burton suddenly found he could talk.

“Why am I here?” he begged. “I made people happy. I filled their lives with sly smiles and user-friendly creepiness. I helped create the careers of Michael Keaton, Johnny Depp, and Pee Wee Herman. Yes, I made mistakes, but Hell would seem to be a little steep of a punishment for Charlie and the Chocolate Factory and Planet of the Apes. Did Lisa Marie send me here?”

“You’ve got it all wrong,” said Hoover. “If we took in every asshole who made a bad film or had pissed off their girlfriend, this place would be as crowded as a Chipotle on 14th Street. Hold on a minute, will you?”

Hoover adjusted the dials on a stereo set on the counter, loading a six-CD changer entirely with copies of Emerson Lake and Palmer’s Brain Salad Surgery.

“This is the only thing we play in Hell,” he explained. “So get used to it. Anyway, my knotty-haired friend, you are here for one simple reason: Danny Elfman. Without Tim Burton, Elfman would be as obscure as, oh, Skafish or Pearl Harbor and the Explosions. Yes, I understand that you and your films have provided some limited joy to the people of Earth, but this achievement is absolutely meaningless when compared to the horror you are responsible for by unleashing Danny Elfman, the King of Flyshit, on an innocent and unsuspecting world. If only you had never hired him, he and his horrific, almost mentally unhinged band of new wave over-players, Oingo Boingo, would have passed into worthy anonymity.

“You see,” Hoover continued, “an extreme—indeed, hysterical and unbalanced—love of Steely Dan should never, ever be the root basis for a new wave band, much less an extensive catalog of movie scores. No amount of atonement, stunt casting of elderly movie icons, or begging for forgiveness will compensate for this sin.”

“Is it that bad?” Burton whispered.

“Yes! Everything Elfman composes sounds like music to accompany Robin Williams’ Twyla Tharp imitation. I mean, for the love of Satan, have you heard ‘Only A Lad’? Remember when you were in 10th grade and you went to the cast party of whatever musical your high school put on that year—oh, I don’t know, Carousel—and there was that one guy who was like, ‘Look at me, I’m so weird! I wear shorts in winter and a Boy Scout shirt even though I’m 15! Oh, I’m so very weird!’ And he spent the whole party trying to talk to you about Todd Rundgren and Ralph Bakshi’s animated version of Lord of the Rings…remember that guy? He was precisely the sort of person who thought Oingo Boingo were a great band. Isn’t that proof enough?”

“I see you need more convincing,” Hoover said. “Once, I went to Vegas for a long weekend with a record industry friend of mine. We were staying at the Imperial Palace.”

“The IP? Why didn’t you stay some place nicer?”

“It was the ’90s,” Hoover answered. “The IP had a certain down-market charm. So we were about to head out for the evening, and I laid out a couple of lines and I hoovered away, hence the name, not knowing that the stuff was speed. I walked around for three days feeling like I was trying to cross a six-lane freeway while holding a giant pane of glass. It was a nightmare. And the inside of my head felt like a Danny Elfman soundtrack. I mean, his soundtracks all sound like a massive orchestra playing the sound you used to hear when you connected on a dial-up modem.

“Yes, that sounds about right,” said Burton. “Listen, is there anything I can do? I mean, I’ll do anything.”

“Why yes, there is. There’s a retrospective of Elfman’s music at Lincoln Center this summer. Arrange a group of musicians to gather outside the venue and play Terry Riley’s In C as loudly as possible before, during, and after the Elfman event. It is likely the only effective antidote to Elfman’s passive aggressive smartypants maximalism is good-old fashioned maximum minimalism. Alternatively, I will also accept a 240-minute performance of ‘The Unanswered Question’ by Charles Ives. But I think you’ll find ‘In C’ more satisfying. I mean, you can teach hobos to play it.”

“That sounds excellent. I’ll do it.”

The Under Assistant Devil for Entertainment-Related Atrocities consulted his phone.

“Oh…wait…the event already happened. Ha. Well, then you’re out of luck, aren’t you? Your only other options to get out of here are marrying Billy Joel or being Paul Simon’s waiter.”

“Hmmm. Let’s try this,” suggested Hoover. “Here are two CDs. One is by an avant-garde trombonist named Stuart Dempster. It’s called Underground Overlays from the Cistern Chapel. This is the kind of music the angels listen to when they smoke opium and drive from Needles to Barstow. And the other is by the Durutti Column. They were the first band on Factory, you know. The album is called Vini Reilly. It’s full of grace, anxiety and hope—it’s the sound of a little child in the planetarium who reaches out to hold his mothers’ hand and realizes she isn’t there. These artists are the Anti-Elfmans, you see, and if you vow to use one of these in a soundtrack, I’ll get you back to earth. Heck, I’ll even let you go if you give Cliff Martinez a shot. I mean, his work on The Knick is fantastic. He’s another Los Angeles new wave survivor, and clearly you are drawn to those types.”

“Alright,” Burton intoned, nodding his head. “I’ll do it.”

“Excellent!” said Hoover. “You can leave as soon as ‘Karn Evil 9’ is over. And take off those fucking glasses. Oh! I forgot to tell you something! ‘Karn Evil 9’ never ends.” 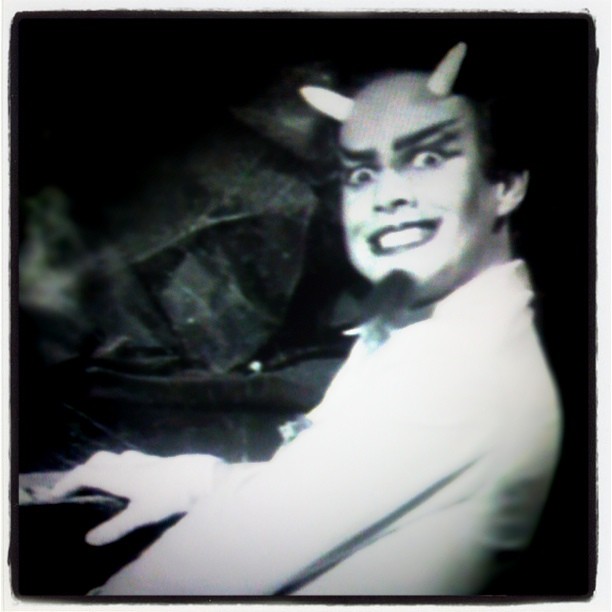