Walking the High Line, you might not stop to think twice about a large oxidized steel sculpture in the form of the framework of an altarpiece from Belgium, an empty outline in metal. It’s impressive to look at, but there’s a distinct danger that you might shrug your shoulders and walk on from artist Kris Martin’s replica of the empty frames that surround Adoration of the Mystic Lamb, also known as the Ghent Altarpiece, which was completed in 1432 by Jan van Eyck. But shrug and walk on at your peril, because you’re missing one heck of a good story that’s buried in the empty space between those frames.

There’s a reason Mr. Martin’s frames are empty. The Ghent Altarpiece is the most frequently stolen artwork in history, having been burgled, all or in part, on six occasions, the object of a total of 13 crimes over its almost 600-year existence. It’s also easy to argue that this monumental triptych is the most influential painting ever made, since it was the first major oil painting and forecast artistic realism, launching the preferred medium and style of painters for the next several centuries. It’s a single work that blossoms with superlatives, and holds interest whether you’d be naturally inclined to a work of art—or just enjoy a good true crime story.

The Ghent Altarpiece, featured in the George Clooney film The Monuments Men, has been the object of 13 crimes in its almost 600-year existence.

The work’s fame, and the wish to possess it, has been cumulative. The moment it was unveiled to the public, on May 6, 1432, it became an object of pilgrimage for artists and cultured travelers, who voyaged to the Cathedral of Saint Bavo, in the city of Ghent in northwest Belgium, to admire this wonder of the man-made world. It was the Bilbao Guggenheim Museum of its day, and then some. The level of detail was unprecedented, in terms of naturalism and wonders to catch the eye—in this colossal painting, with over 100 figures in it, from Adam and Eve to the Archangel Gabriel to donors, van Eyck took the time to paint the reflection in a horse’s eye and a botanically identifiable assortment of plants.

Often controversial, with images based on Catholic mysticism, it was targeted by Calvinists during riots over control of the city in 1566. They were foiled because a group of knights had the forethought to dismantle it into its 12 component panels, and hide it safely in the bell tower.

Its tumultuous history continued in 1794, when French Republican troops captured Ghent, removed the four central panels and shipped them to the Louvre in Paris: Napoleon’s new museum of art. What Napoleon’s soldiers failed to swipe, a local vicar managed to carry out. In 1816, while the bishop was out of town, the renegade vicar sold the wing panels of the altarpiece. They were bought by a Brussels art dealer and sold to a British collector, who sold them on to the King of Prussia, who planned to build an art collection to out-do the Louvre.

Among its other adventures, the altarpiece was hidden during the First World War from the Germans by an enterprising cathedral canon, who smuggled it out to a series of locations to keep one step ahead of the occupying Germans, who were determined to capture it.

During the Second World War, it was one of some 7,000 masterpieces seized by the Nazis and destined for Hitler’s planned “super museum.” This cache of looted art, hidden in a salt mine, was saved from destruction thanks to a pair of Monuments Men and the guerilla actions of local members of the Austrian Resistance (the story is told, loosely, in the 2014 George Clooney and Matt Damon film, The Monuments Men, and in more detail in my book, Stealing the Mystic Lamb).

Visit Ghent today, and you’ll see eleven-twelfths of the original altarpiece. One of the 12 panels was stolen in 1934 and never recovered. It remains an enduring mystery: the theft seems to have been designed based on the plot of the mastermind’s favorite book. A bizarre series of ransom demands led to the recovery of part of the stolen panel (which had been split vertically in Berlin, in order to display the front and back side by side), but the section referred to as the “Righteous Judges” remains missing.

A clue uncovered decades ago suggests tantalizyingly that the panel may be hidden somewhere in plain sight, “where no one can recover it without attracting public attention,” as a ransom note stated. So next time you’re in Ghent, keep your eyes peeled.

Through centuries of tumult and misadventure, it is remarkable that the Ghent Altarpiece remains as intact as it is. But the original framework, which was likely sculpted and highly ornate, has been lost since the Calvinist riots.

Artist Kris Martin has provided a minimalist reproduction of it for us, perched in iron this year, along the High Line. Mr. Martin, born in 1972 and based in Ghent, is represented by the prestigious White Cube gallery. His work toys with concepts of existing art, including “doctored” antique prints, a daisy-chain of two-hundred Christ statuettes, and his best-known work, a conceptual piece in which he caused the bubbly hubbub of the 2007 Frieze art fair to go silent for a minute, on request from a loudspeaker calling for silence “for no particular reason.”

Now he has taken on the icon of his hometown. Once you know the story, his empty frames become a lot less empty than they appear. 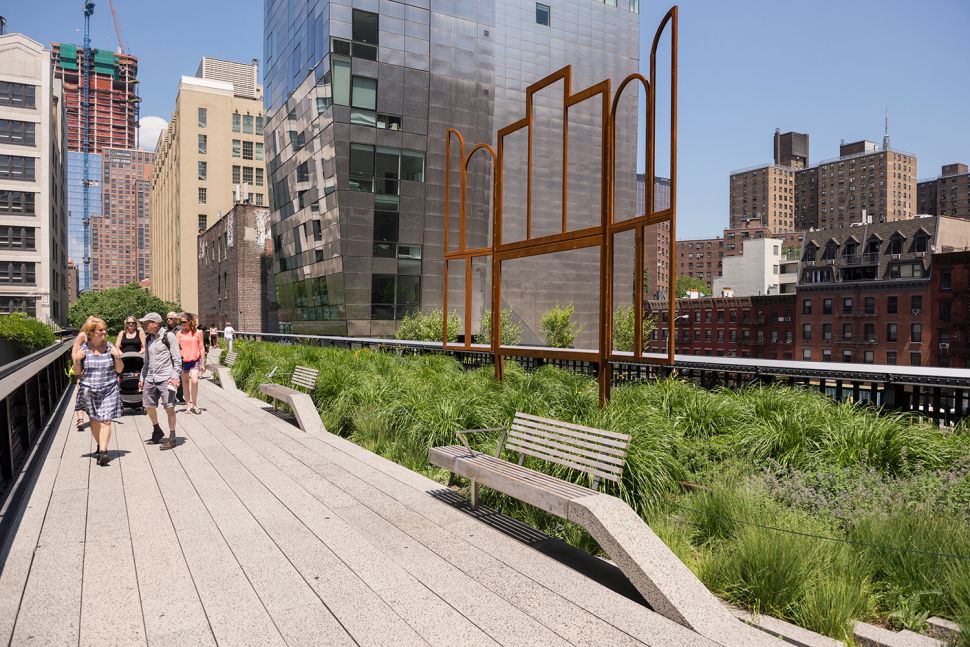