As Pope Francis rolls into town, a funny thing happened to American religion and politics. Once the bailiwick of the hellfire-and-damnation set, the Pope is succeeding in resetting America’s moral compass and challenging our views of what being “religious” means in a political context.

For decades, one of the deepest divides in U.S. politics has been between the religious and the non-religious. In fact, the division is so deep that those who are religious – who self-identify as religious or attend religious services once or twice a week – have more in common politically with deeply religious voters of other faiths than they do with less-religious members of their own faith.

And those deeply religious folks have dominated the intersection of religion and politics for decades. Fomenting throughout the 1970s, religion took a formal seat at the political table during the Reagan administration. And then in 1989, when Pat Robertson failed to win the Republican presidential nomination, Robertson unified Evangelical Protestant Christians, Christian fundamentalists, neo-evangelicals and charismatic Christians under an umbrella organization, the Christian Coalition. It was then that religious people emerged as a voting bloc, particularly within the Republican Party. The Christian Coalition succeeded in moving the U.S.’s political agenda to the right, embracing a particular brand of social conservatism, emphasizing what they called a “pro-family” agenda, including their anti-abortion rights stance, opposition to teaching evolution, advocacy for school prayer, opposition to gay rights in all forms — indeed to homosexuality in general, opposition to stem-cell research, and railing against pornography and contraception. And these deeply religious Christians remain an important constituency for Republicans, particularly for Republicans running for president in early primary and caucus states, where a blessing from a particular minister can sway dozens of votes.

But today, in Washington, D.C., in New York, in Philadelphia, Pope Francis is redefining what it means to be politically religious. Yes, the family is important. But so is the earth. So is the immigrant. So is the worker.

The failed religious agenda of the right in 1980s has been supplanted by a new agenda emphasizing protecting the environment and decreasing income inequality.

And that divisive religious agenda of old?

Francis is having none of it.

The failed religious agenda of the right in 1980s has been supplanted by a new agenda emphasizing protecting the environment and decreasing income inequality. The condemnation of the past is being replaced with compassion. And the social conservatism of the deeply religious set is being swept out by a religious emphasis on economic liberalism.

A recent ABC News/Washington Post poll indicated that 67 percent of Catholics and 59 percent of those surveyed agreed that it’s appropriate for the pope to urge government action on social, economic, and environmental issues.

And a recent Gallup poll demonstrates the shifting ground of American religions: confidence in organized religion among Protestants has steadily been declining, hitting a record low this year with a very slim majority – 51 percent – of American Protestants saying that have a great deal or quite a lot of confidence in their church. But that 51 percent is a nexus – today 51 percent of Catholics say that they have a great deal or quite a lot of confidence in the church, signifying an evening out of a volatile confidence measure that, in the wake of sex abuse scandals and the resignation of a pope, has sometimes plummeted to as low as 39 percent in recent years. The stabilization of the confidence in the church by Catholics is viewed as a reflection on the leadership of Pope Francis, who has reshaped the mission of church and is perceived as tougher in holding sex abusers responsible for the their actions.

Apparently, Francis’ message is resonating, both among Catholics and others. A CBS News/New York Times poll conducted earlier this month indicated that a vast majority of Catholics (79 percent) and a slim majority of all respondents (51 percent) agree with the direction in which Pope Francis is leading the Catholic Church. He’s got enviable approval ratings — among Catholics, 86 percent approve of his job performance, while 70 percent of all Americans do.

And he is unafraid of the political. In his remarks to President Obama, Pope Francis noted “it is encouraging that you are proposing an initiative for reducing air pollution. Accepting the urgency, it seems clear to me also that climate change is a problem that can no longer be left to a future generation. When it comes to the care of our ‘common home’ we are living at a critical moment of history.” And Francis’ stand on the environment is popular among Catholics, with 68 percent approving of the job Pope Francis is doing in addressing environmental issues, including climate change.

Recognizing the increasingly deep anti-immigrant backlash in the United States and Europe, His Holiness began his remarks at the White House with a nod to immigrants, reminding Americans of our common heritage: “As the son of an immigrant family, I am happy to be a guest in this country, which was largely built by such families.”

The arrival of Pope Francis– perhaps, more accurately, his tenure as pope – has turned what it means to be “politically religious” on its head. Compassion is cool. Charity is God’s work. Ostentation is out (I mean, the 5’9 pope is squeezing into the back of a Fiat, for God’s sake). Protecting the earth is protecting a gift from God. And we are reminded that we are our brothers’ (and sisters’) keepers, as Francis called on “all men and women of good will in this great nation to support the efforts of the international community to protect the vulnerable in our world and to stimulate integral and inclusive models of development, so that our brothers and sisters everywhere may know the blessings of peace and prosperity which God wills for all his children.”

But with Francis’ priorities representing a sea change in what it means to religious and political in America, that too may soon change.

Brigid Callahan Harrison, Ph.D. is Professor of Political Science and Law at Montclair State University, where she teaches courses in American Government. A frequent commentator on state and national politics, she is the author of five books on American politics, and serves as president of the New Jersey Political Science Association. Like her on Facebook at Brigid Callahan Harrison. Follow her on Twitter @BriCalHar 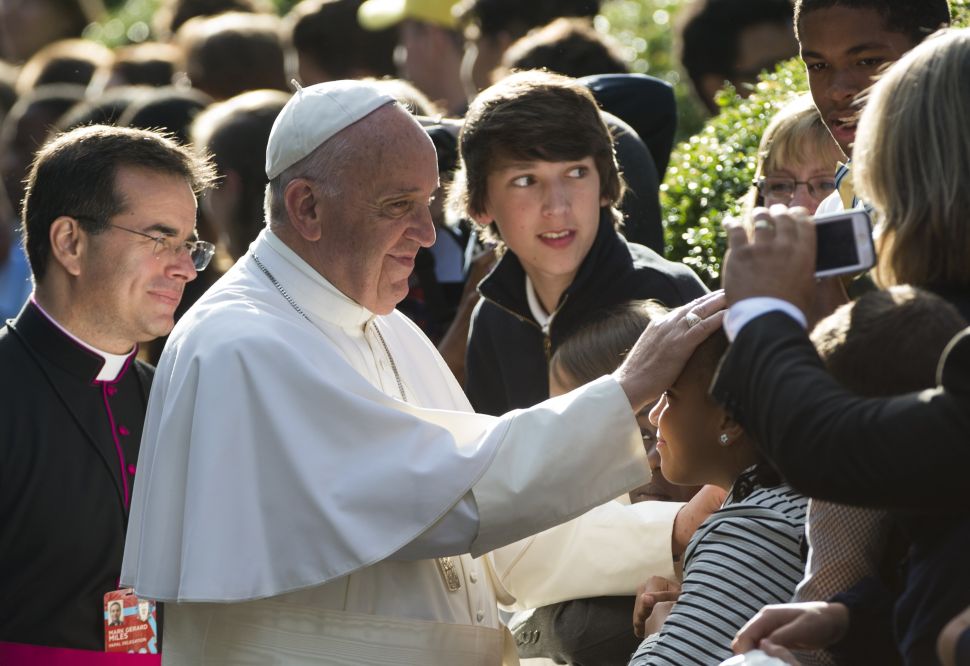