Another Primetime Emmy Awards has come and gone, friends, and look at that, most of us survived. In the rubble left over from the Game of Thrones dragons swooping in and scorching everyone, we have some emotional highs, some strange lows, and Louis CK still awkwardly walking around New York filming himself talking about comedy writing.

If you wanted to see the actual list of winners and losers, check out the slow descension into madness and boredom known as our live-blog, or just read the full list here. But good luck, because the actual list makes no sense. Peter Dinklage for Outstanding Supporting? Veep over Transparent? No love for Amy Poehler OR Parks and Rec‘s final season? This year’s awards played almost like a parody sketch about the Emmys, where 90 percent of the winners took the prize because the Emmys know they are supposed to be baffling. This led to many a confused acceptance speech, even from those not half as stoned as Dinklage was. (For the record, the other 10% including Amy Schumer, Viola Davis, Olive Kitteridge, and Jeffrey Tambor were so very, very well-deserved).

So no, forget that list. Here’s a list that matters. The REAL winners and losers at the 67th Annual Primetime Emmy Awards.

LOSER: History. But really, WINNER: Viola Davis. This is the greatest loss in Emmys history, by the way. The past itself lost in a battle many of us would lose as well, against the inimitable Viola Davis, who became the first African American woman in history to take home the Lead Actress in a drama award. Ms. Davis used her time at the microphone to spit liquid hot truth-fire on to the audience, in one of the most powerful and authentic moments of not only the nights, but the usually plastic-covered Emmys themselves. I think it was the most genuine thing I’ve ever heard, and unfortunately one of the most necessary.

WINNER: Our sleep schedules. I know that the Pope hasn’t arrived in the US yet, but the Emmys concluding a full two minutes before 11 PM EST is an actual, real-life miracle.

LOSER: Anyone who hasn’t gotten to everything on their DVR. The Emmys wanted to have their Netflix, and stream it, too. The show started with an Andy Samberg musical number that lightheartedly poked fun at the fact that it’s impossible to watch all the quality TV these days. Three hours later, they decided it was no longer a laughing matter, and just decided to catch you up against your will. Didn’t catch the ending to your favorite show? Here is a montage of every emotional climax for you. (Warning: video contains spoilers and Fred Savage)

WINNER: Bad Pussy. The boring news is Game of Thrones broke the record previously held by the West Wing for most Emmys won in a single night (West Wing: 8, Game of Thrones: 12). And on George RR Martin’s birthday, none the less! But the amazing/soul-crushing news is that the episode featuring the single worst line of dialogue in Game of Thrones history won an Emmy for WRITING. Someone wrote the “bad pussy” line into a script, and someone else gave them an award for it. What a strange, magical world we live in.

LOSER: Empire, but mostly Terrence Howard. Empire will unfortunately have to settle for being the most popular show in the world, because snubs and losses ensured it came away Emmy-less. Which is actually fine, because Taraji P Henson’s loss ensured we got the aforementioned Viola Davis win, and Empire has countless seasons ahead of it. No, the real loser here is Terrence Howard who, as Rolling Stone confirmed, invented the number two, has the power to unlock the secrets of the universe, and is 100% legitimately bananagrams. His awkward “banter” and Travolta-esque kiss stealing with co-star Ms. Henson actually made me want to watch Empire less, and supported the theory that maybe, just maybe, we should collectively as a society stop asking Terrence Howard to present awards.

WINNER: TRACY MORGAN. I’ve written before about how much Tracy Morgan meant to a young me, and how devastating the thought of us losing his comedy forever was. What a fantastic, and surprising, moment it was to see Mr. Morgan not only take the stage, but actually tell a joke. Welcome back, Tracy.

LOSER: The blog where I anonymously rant about the fact Jon Hamm has never won an acting Emmy. RIP HammSandwich.tumblr.com, but congratulations to Jon Hamm on his first Lead Actor Emmy for Mad Men. Although, with Mr. Hamm’s win marking the ONLY occasion Mad Men took home an acting Emmy, methinks the hot-takes are far from over.

WINNER: The writers of the 67th Annual Emmys. This is the first Emmy Awards in recent memory that I can remember being genuinely funny all the way through. I know a lot of the credit probably goes to Andy Samberg and the Lonely Island crew. But if I ever find out whose idea it was for Samberg to mock GIRLS by eating out the ass of a giant Emmy statue, I will shake that person’s hand vigorously. Then, probably wash my hand vigorously.

LOSER: The Emmy Awards. TV has changed, if you haven’t noticed. We who cover the medium will write ad nauseam about the countless options, the through-the-roof quality and the freedom to choose that television offers, and continues to offer in new and innovative ways. But what doesn’t get brought up often is how much the TV viewer has changed. The sheer amount of great TV caused this change, but so has social media, and the internet, and the ability of a TV viewer to voice their opinion across multiple platforms on multiple shows, and have it actually be heard. It’s empowering. You’re not only a viewer, you’re a critic and collaborator all in one.

Which is why, I think, that year after year I feel less outrage after the Emmys. Not just from me, but from everyone. Remember when I said many of this year’s winners were baffling? They were, but it simply doesn’t matter anymore. Gone are the days when any award show could tell you what TV is good TV. We know the Emmys can’t watch all the TV, the TV Academy themselves know they can’t watch all the TV, and so every Game of Thrones or Modern Family or whatever win is met not with outrage but a shoulder shrug and a simple “weird, but I prefer this show. Whatever.”

Television, especially Fall Television, is marked by big events. The Emmys are basically just another event now, a ratings grabber with little actual substance. We’ll tune in for the awkward speeches, the surprises, and the chance to Tweet along, but when it’s over we won’t harp on how wrong they were. We’ll just fire up Netflix, or Amazon, or HBOGO, or so many other options and continue loving the television we love, award-worthy or not. 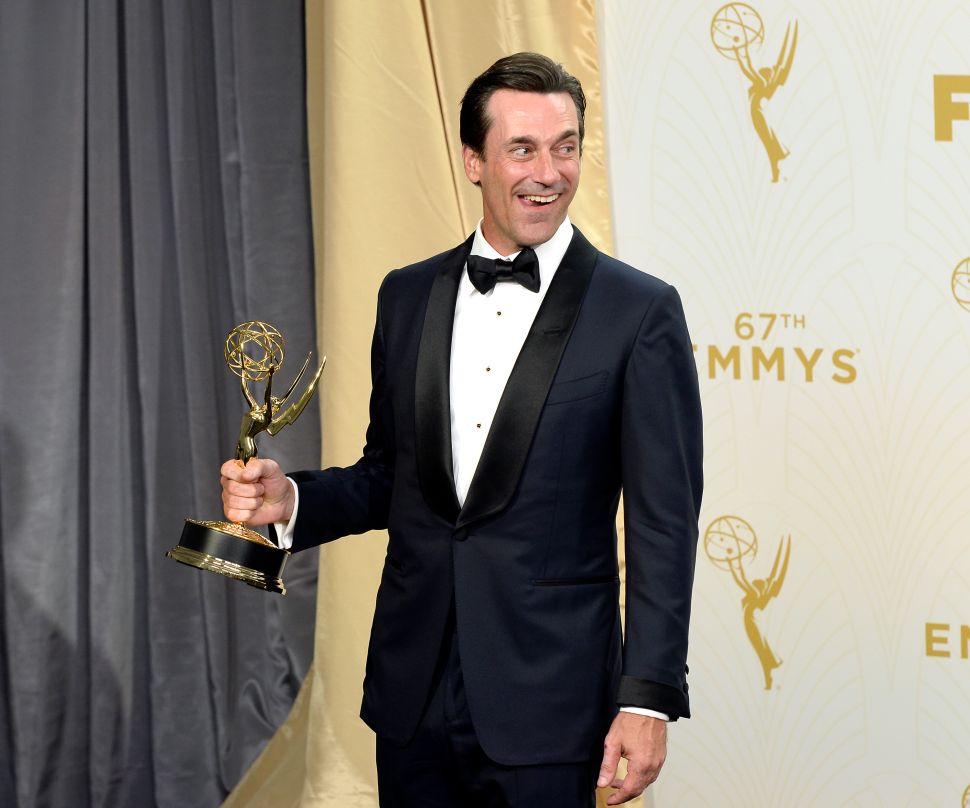