Wisconsin Gov. Scott Walker is dropping out of the Republican primary. While it was not surprising that he dropped out, as he has been largely absent from the political stage recently, it was surprising that he would drop out so quickly.

He is the first of the “top tier” candidates to do so. Rick Perry dropped out two weeks ago, but he was struggling to break from the lower-tier candidates. His dropping out hardly registered in a crowded field full of other governors and conservative icons.

But Mr. Walker, who, like Mr. Perry, has been elected as governor three times (including once during the infamous Wisconsin recall election in 2012) and has a track record of accomplishment, stands as a stark reminder of what a poor national campaign can (or can’t) do.

Mr. Walker entered the race as the top contender. He was, for a short time, the man to beat. That quickly changed when he failed to appropriately answer meaningless “gotcha” questions about evolution and President Obama’s religion. I actually cringed when he answered these questions, because I couldn’t understand how someone running for higher office – and who had survived three major elections with significant attacks – couldn’t answer simple questions.

Despite having survived three elections and being invited to speak at conservative conferences across the country, Mr. Walker appeared not ready for primetime.

And the primetime debates proved it. During the first debate on Aug. 6, Mr. Walker’s performance was widely panned. He couldn’t stand out as a conservative firebrand in a field of conservative firebrands and Donald Trump. His answers were forgettable, lacking passion and substance beyond talking points. Looking back, I can’t remember a thing he said at either debate that stood out outside of his opening statements about his record in Wisconsin.

I wrote last week that he relied too much on his accomplishments in Wisconsin and too little on what he would actually do as president. He had probably the best track records of anyone on that debate stage, but he couldn’t articulate it in a way that translated into his future ambitions as president.

His poor debate performances led many to begin questioning how long he would remain in the race. The Atlantic’s Molly Ball asked: “Can Scott Walker Save Himself?” and laid out the candidates fall from the top of the polls in April to 6th place in early September. On Sunday, his freefall continued in a CNN poll showing the Wisconsin governor with just half a percentage point of the vote. That means that from April to mid-September Mr. Walker fell from first place to twelfth.

To put this in context: Lindsey Graham, George Pataki, Rick Santorum and Jim Gilmore have all outlasted Walker. If you were to ask me even earlier today whether that would be the case, I would have laughed.

But while none of those candidates has gained traction, they also hadn’t lost as much support as Mr. Walker had. Their base remains low – but steady.

Mr. Walker couldn’t even hold down his own policy positions. He flip-flopped on birthright citizenship multiple times in a single week, ranging from opposition to supporting it (he said he wouldn’t repeal the 14th Amendment) back to opposition and then supporting it once again and finally saying at the end of the week that he had no position on the issue.

That kind of flailing on an issue is not presidential, and has doomed many other candidates branded as flip-floppers (remember how many times the label was applied to Mitt Romney?).

Mr. Walker also had to contend with issues behind the scenes that other candidates haven’t. In March, Mr. Walker hired consultant Liz Mair as his digital media strategist, only to accept her resignation a day later after a scurrilous report from Breitbart News about her political beliefs. It didn’t matter that Ms. Mair (who occasionally writes for the Observer) wasn’t a policy expert for Walker, she still apparently had to go. Mr. Walker didn’t stand by her. He just let her go. He couldn’t even stand up to a small percentage of far-right Republicans.

Walker’s internal campaign problems didn’t end with Ms. Mair, however. Some of his donors thought his campaign manager, Rick Wiley, needed to go, and even began circulating a rumor about him. And one of Mr. Walker’s biggest donors, Stanley Hubbard, told various media outlets that he would start donating to other candidates. 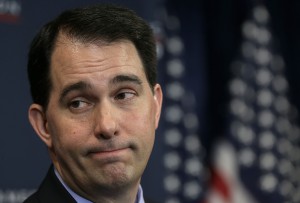