Call it the Financial District if you must—just don’t do it within earshot of Douglas Elliman broker John Gomes.

“It’s one of my pet peeves,” Mr. Gomes said of the fact that people (this reporter included) continue to insist on referring to the neighborhood at Manhattan’s southern tip by, well, its name.

His preferred nomenclature for the area? Lower Manhattan. And he’s not alone. Over the last decade an assortment of the usual suspects—business groups, real estate developers, and so on—have pushed this alternative that, they say, better captures the neighborhood’s recent evolution.

In other words, it’s your basic rebrand attempt, right?

No! insisted Mr. Gomes during a recent conversation with the Observer. It’s nothing so crass as that. Indeed, he sounded faintly offended by the suggestion.

Fundamentally, he said, it’s a matter of accuracy.

“It’s silly to refer to it as the Financial District because it’s not a financial district anymore,” he argued. “We think [Lower Manhattan] is a better name because that is what it is. I’m all about inclusion, and when you refer to it as the Financial District, it feels very exclusionary. It doesn’t feel inclusive of all the people who are living and working in that district.”

Granted, FiDi is changing, sprouting new high-end condos like 50 West Street and 30 Park Place and drawing big-name non-financial tenants like News Corp and Condé Nast. Nobu is relocating to the neighborhood from Tribeca, with restaurants from Tom Colicchio, Keith McNally and April Bloomfield, among others, set to follow. High-end retail spots like Hermès and Saks Fifth Avenue are coming to the area.

But the notion that accuracy demands that a name change must therefore follow seems a bit…dubious.

No one seems to care, for instance, that there’s precious little seaporting being done around the Seaport these days. Likewise, the Meatpacking District years ago converted over from a food-processing center to a club kid playground, but you don’t hear many (any?) calls to rename the place Bottleservicelandia.

What’s in a name? And when is it time for a change? And how, for that matter, do you make that change actually stick?

Take Astoria, for instance. Originally known as Hallett’s Cove, the area was renamed in 1839 by developer Stephen Halsey in an attempt to convince John Jacob Astor to invest in the new residential community he was building on the spot. In the end, Halsey was able to squeeze only a few hundred dollars out of the fur tycoon, who, famously, never visited the neighborhood, but the name has endured all the same.

The change was put forth by local business owners in the aftermath of the fatal stabbing of two teenagers at a neighborhood playground. And, for a few years, “people were using it, and it gained momentum,” said Corcoran’s Gabriel Bedoya, who works in the area.

In recent decades, though, the old moniker has reasserted itself, he said. “People started using the name Hell’s Kitchen again. The locals now don’t use any other name.”

“You can see why you might have better luck selling real estate in Clinton than in Hell’s Kitchen,” Ms. Feirstein said. On the other hand, she noted, as the neighborhood has gentrified, reverting to the old name lets residents gather up a bit of residual street cred.

“You can say, ‘I live in Hell’s Kitchen,’ and you get a whole series of reactions to a name like that,” she said. (Not that you’re actually fooling anyone, mind you.)

“It has that brand of the rebellious side of New York, and that history,” Mr. Bedoya said.

Of course, a shady past isn’t always real estate gold. If it were, brokers would still be calling Manhattan’s NoMad neighborhood Satan’s Circus, as that stretch north of Madison Park was known in the late 19th century due to its surfeit of brothels, bars and general misbehavior.

‘You can see why you might have better luck selling real estate in Clinton than in Hell’s Kitchen,’ said Sanna Feirstein, author of Naming New York. On the other hand, she noted, as the neighborhood has gentrified, reverting to the old name lets residents gather up a bit of residual street cred.

The name NoMad itself has had something of a long road to acceptance. Originally presented to the wider world in a 1999 New York Times article, “The Trendy Discover NoMad Land, and Move In,” the name failed to catch on until a series of hotels and eateries—the Ace and NoMad hotels perhaps most notably among them—began to populate the area around a decade later. People didn’t need a name for the place until they had a reason to go there.

More, though, than hot hotels or restaurants or the designs of real estate developers, the key factor in determining neighborhood names today, said Realty Collective’s Tina Fallon, is how they’re designated by big listings websites like StreetEasy and the Times.

“There might have been a point in time when real estate agents attempted to name neighborhoods as part of some kind of marketing ploy,” she said, “but as of right now, we’re all brought into alignment with sites like StreetEasy. Until those [sites] change the name of a neighborhood, we aren’t changing the name.”

As a resident of Brooklyn’s Columbia Street Waterfront District, Ms. Fallon had a front row seat to a recent name change flop—the now largely abandoned effort to designate the area, which lies across the Brooklyn Queens Expressway from more affluent Carroll Gardens, as Carroll Gardens West.

“I do remember that brief flowering of Carroll Gardens West,” she said. “But it didn’t last long,” in large part, she asserted, “because The New York Times and StreetEasy decided it was going to be known as the Columbia Waterfront.”

“At that time we were moving as an industry to something that was primarily web-based,” she said. “And people were searching primarily not on broker sites but on these third-party sites, and so those third-party sites really have control over the names of these neighborhoods.”

It’s also perhaps worth noting the name’s unfortunate air of blatant, grasping desperation—the way you can almost hear as you read it the sad, ponderous sigh between the words.

“Hey man, where are you living these days?”

Who knows? Flip it around, maybe it sticks.

In any case, Ms. Fallon’s theory is an inauspicious one for Mr. Gomes and his fellow lower Manhattan partisans. According to StreetEasy PR manager Lauren Riefflin, the site, which reviews its neighborhood names along with requests for revisions on a quarterly basis, has no plans to rename the Financial District at this time.

But does it really matter? If a neighborhood is cool, who cares what it’s called?

Like Mr. Gomes, Platinum Properties rental manager Daniel Itingen is all for a Financial District rebrand. He acknowledged, though, that at the end of the day, “the actual neighborhood should at some point overshadow perception.”

Which is good, since, so far, lower Manhattan doesn’t particularly seem to be catching on. Asked how many of his customers still call the neighborhood the Financial District, Mr. Itingen put the number at around 99 percent. ν 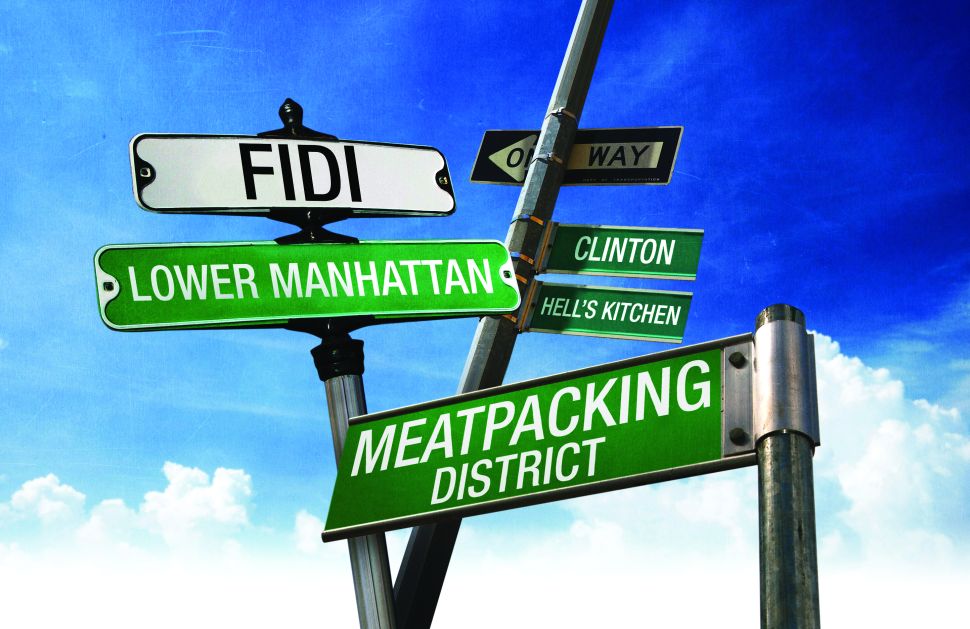