Is our government spying on us? Did the CIA traffic cocaine with the Contras? Was the moon landing fake? Do aliens walk the Earth?!?

This fall, these questions are on the agenda as America’s favorite conspiracy theories are showcased in a strikingly original piece that’s part big-band and jazz concert, part documentary—and all paranoid.

The piece is Real Enemies, which premieres as part of the Brooklyn Academy of Music’s “Next Wave” festival on November 18, and runs through November 22. Co-created by writer Isaac Butler, filmmaker Peter Nigrini and composer Darcy James Argue, it uses found footage video, text, narration and music to show the gloriously escalating trajectory of America’s myths, plots and intrigues.

As the minutes pass, the conspiracies become more and more absurd.

Split into 12 chapters, Real Enemies features an 18-piece band playing a 12-tone modern composition as accompanying videos interpret each chapter’s conspiracy. A large “doomsday” clock on stage inches toward midnight over the course of the show’s running time. As the minutes pass, the conspiracies become more and more absurd. (Giant reptilian lizards disguised as politicians might even make an appearance, the creators promise.)

The show initially dives into conspiracies that aren’t just theories: Edward Snowden’s work for PRISM, or “The Red Scare,” for example. From there, the “Dark Alliance” chapter will examine the alleged conspiracy that the CIA helped the Contras traffic cocaine, a popular theory. “The Hidden Hand” goes into secret societies like the Illuminati and the Freemasons, while the next chapter entertains the idea of false flag operations—has the government ever pretended to be attacked in order to justify war against another country?

There’s something for everyone, especially if you’ve ever joined a doomsday cult, doubted the space program or believe shape-shifting reptile aliens are secretly holding our country’s positions of power.

It gets worse, or better, depending upon your point of view: The creators of Real Enemies are keeping the final two chapters “top secret.”

“Through experiencing the paranoid moments and seeing them on stage, being a part of them in a live room changes [the audience’s] understanding of paranoia,” said Mr. Butler, who collaborated with Mr. Argue on Brooklyn Babylon at BAM in 2011. “You’re coming into this space, this experience, and because it’s not a traditionally narrative work… we’re doing a psychic transportation.”

If all goes according to plan, Real Enemies will “create this chain of associations and juxtapositions, [a] sort-of mood and setting for those things through music, in a way that kind of mimics the conspiratorial thought process itself,” promised Mr. Argue. Even his decision to compose the score using Austrian composer Arnold Schoenberg’s 12-tone technique of musical serialism, in which each tone of the chromatic scale is organized into a particular sequence of notes, was deliberate.

‘I have a lot more empathy for people who believe this stuff,’ Mr. Butler said.

At the center of this structure is the piece’s ever-present “doomsday clock,” which is both a real-world indicator of how close society is to a tangible Armageddon, and a common reoccurring motif in conspiracy culture. As Real Enemies moves from conspiracies that are proven to ones that are not, the chain of paranoid validation never ends—the minute anyone is elevated to a level of hysteria they go right back to the beginning, without any closure or finality.

“If you watch any of those documentaries on Netflix, they always start with stuff we already know,” said Mr. Butler. “How do you build from there the ever-weirder and more outlandish things?”

Though the creators consider themselves to be rational and skeptical folks, they were not exempt from changing moods during the course of creating the show. For Mr. Butler, the chapter on doomsday cults, which includes Jim Jones’ Heaven’s Gate and The People’s Temple, was particularly heartbreaking to explore. “Researching that chapter was just incredibly sad, actually emotionally painful,” he said. “Even though I don’t agree with a lot of conspiracy theories and I think some of them are ridiculous, some of them are harmful and some of them are funny, I have a lot more empathy for people who believe this stuff.”

By approaching the material through such different angles, the creators of Real Enemies have made a truly interdisciplinary piece.

“In trying to create a piece that’s not super, overtly judgmental, it’s forced me to look and to learn and to observe. And it’s probably expanded my compassion to some extent.”

That compassion allowed the creators to wind up with a piece that they expect will affect the cynical, skeptical New York audiences with a similar sense of empathy. “We’re trying to stay as deadpan as possible throughout the show—not be condescending toward the material, but really sort of essay-istically approach the material and try to understand it,” Mr. Butler said.

Indeed, by approaching the material through such different angles, the creators of Real Enemies have made a truly interdisciplinary piece. To have such a work at an institution like BAM is indicative of a trend—just as the new Whitney is presenting dance, and has a dedicated space for performance, more and more cultural institutions are similarly embracing interdisciplinary work that isn’t easily categorized, but may appeal to a crossover audiences.

“Bigger arts institutions are finally talking about and beginning to understand the way that artists have been working for a long time,” said filmmaker Peter Nigrini, who regularly makes video for live theater. “In the 1970s, Robert Rauschenberg did the set for a Trisha Brown [dance] piece that was full of photographs!” 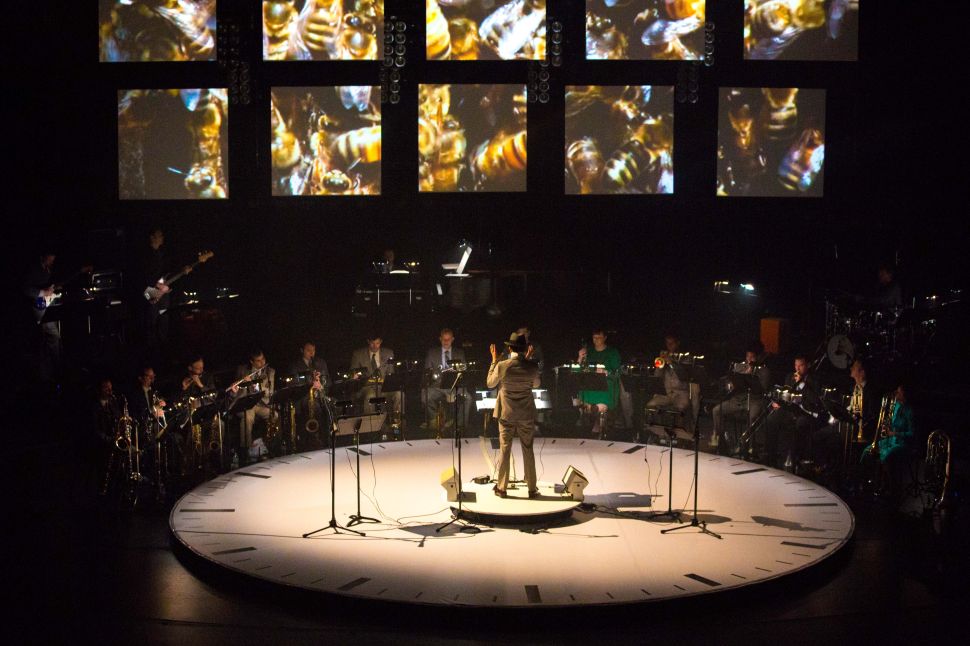