Those who fancy themselves sophisticated news consumers tend to feel guilty if they haven’t finished the latest issue of The New Yorker, which is to say, they always feel guilty. But now would-be readers can spout opinions about the magazine without the tiresome burden of actually opening it.

The New Yorker Minute is a recently launched newsletter that reviews The New Yorker for those who just don’t have time to read it cover to cover. Of course, you could probably get through a Talk of the Town item and maybe a poem in the time it takes to skim the newsletter, but there is a perverse joy in seeing the magazine dissected, its strengths and weaknesses—or what the newsletter perceives them to be—put out in the open.

Written by four pseudonymous critics who call themselves Tilly, Connie, Lady and Tape, the first issue came out in early July. Their mission statement reads: “We are your secret weapon against the Three-Foot-Tall Stack Of Unread New Yorkers Sitting In Your Apartment. We tell you what to read each week; you safely recycle the rest without guilt.”

The newsletter is divided into six sections. There are three short reviews—of the poetry, fiction and cartoons—as well as recommendations on what to check out right away (“Read this”), what to skim (“Window-shop these”) and what to ignore (“Skip without guilt”).

It’s urbane, sardonic, sometimes laudatory and surprisingly incisive—kind of like the 1920s-era New Yorker. “I’m often harsh on New Yorker features that are solid in their reporting, but stumble in the brief passages when they step back and make pronouncements about American life,” Tilly writes of Nick Paumgarten’s recent piece on Atlantic City. “Features like this one justify my snobbery: when it works, it works really well. The lede is short-story-caliber; the second half plays, like individual cards, a sequence of characters each more colorful than the last (with exquisite set pieces at a businessmen’s banquet and at bankruptcy court).”

We talked via email with Tilly (who wouldn’t reveal any of their identities, even off the record) about how the newsletter came about, who writes which reviews, and what an ideal Shouts and Murmurs column might look like.

How long does it take you to read The New Yorker cover to cover?

Contrary to our logo, I don’t actually use a stopwatch, so I’m not entirely sure. But it’s not a big burden! There are six commutes between getting an issue delivered via app on Monday morning and sending out the newsletter Wednesday night; that’s more than enough time.

The only part of the magazine I always skip is the listings portion of the Goings On About Town section (I read the signed blurbs). I skip the Cartoon Contest about half the time

It feels very Spy of the 1980s; you know, they used to review reviewers. Is that an influence?

I’m sure it’s part of the collective unconscious.

How many are you, and what do you each do?

There are four of us, just like it says on the masthead: @dntsqzthchrmn (Tape) does the poetry section, Constance Reader does fiction, The Old Lady from Dubuque does cartoons, and I write the rest (for the most part).

How’d you all come together?

Dark social 😉 Or, if you prefer, friends of friends. The point is that the four of us were vaguely acquainted before I started the newsletter, and were all in the amorphous group of people that I initially asked if they’d be interested in reading a newsletter triaging The New Yorker for them.

I knew I wouldn’t be able to tackle poetry. I don’t remember if I volunteered Tape, or if someone else volunteered Tape, or if Tape volunteered tapeself. When I sat down for the first beta newsletter I realized I had no idea what to say about the short story, and put in an open solicitation for a fiction reader instead; Connie was the first volunteer who already had a New Yorker subscription. And Lady sent a generally-enthusiastic message with several different offers to help, one of which was cartoon reviews, which I hadn’t even thought about. It was all very Wizard of Oz, really.

What’s your favorite New Yorker issue, dating back to 1925?

I don’t pretend to have read all of them! As the author of a newsletter devoted to sifting the wheat from the chaff, so to speak, I’ll go with the one issue in New Yorker history that is 100% “Read this”: August 31, 1946.

Do you have a preferred New Yorker era? (By which I mean, Ross, Shawn, Gottlieb, et al.)

No. At this point in The New Yorker‘s history, what people think about various regimes isn’t shaped by the actual magazines that came out under their watch, but by the mythology of The New Yorker as a capital-I Institution. That doesn’t interest me as much.

In the latest newsletter you praise the Shouts and Murmurs (“Eight Short Science-Fiction Stories,” by Paul Simms), which you seem to hate usually. What’s your ideal Shouts column?

Your newsletter is basically easily digestible media criticism. What do you think A.J. Liebling, the Falstaffian former press critic for The New Yorker, would make of it?

I can’t imagine he’d pay much attention to something so wan and virtual. 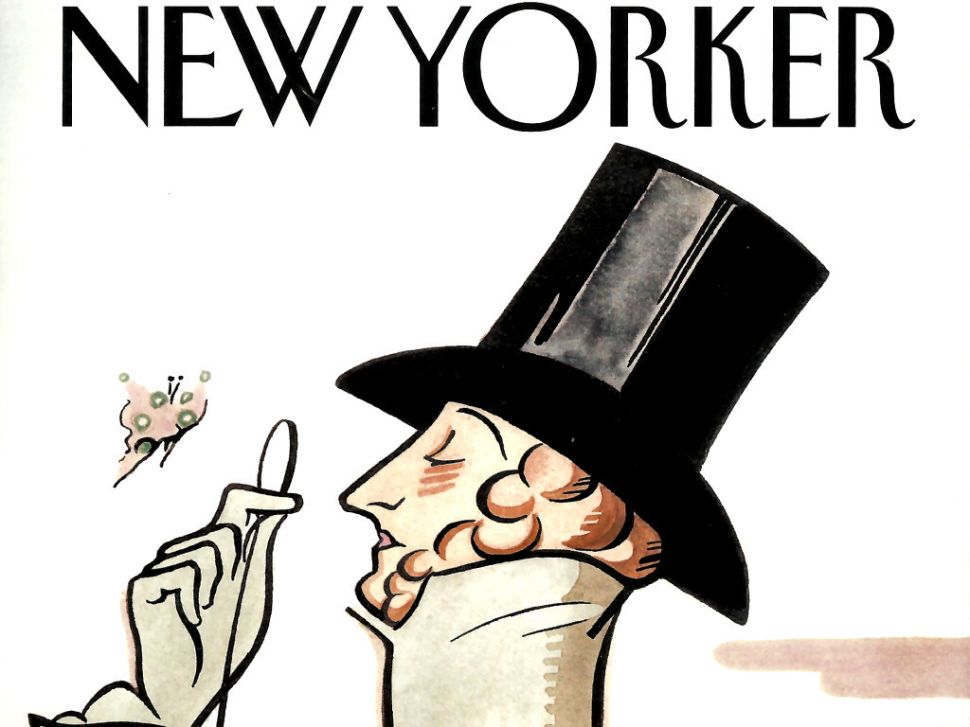