Twenty-two organizations, including Twitter, Facebook and Google, are sponsoring a new petition to “save crypto.” The treatise, which was posted online yesterday, urges President Barack Obama to advocate a strong, secure Internet with no back doors.

Congress, the FBI and world leaders want access to encrypted information so as to prevent terrorist attacks. But major technology companies like Apple and Microsoft think this will put data and infrastructure at risk.

The petition similarly argues that vulnerabilities built in for government use could easily be exploited by bad actors.

“These proposals jeopardize not just our private data, but the security of every technology that relies on this encryption,” the petition states.

As such, the group putting forth the petition is asking Mr. Obama to speak out for uncompromised Internet security. This includes supporting strong encryption and rejecting any laws that undermine it. Companies also should not be pressured to give up data under government pressure or by executive order.

“The government should not erode the security of our devices or applications,” the petition states. “We demand privacy, security and integrity for our communications and systems…Weakening encryption weakens the entire Internet.”

The powerhouse companies behind this campaign need 100,000 signatures to get a White House response, but they want even more than that—they are hoping to make this the most popular petition in White House history. That would require 370,000 signatures.

There’s just one problem: as of this writing, the petition has less than 1,000 signatures. Admittedly it’s been just two days, but this doesn’t bode well for the future of the project.

The concept of the free and open Internet is one of today’s most hot button issues—but interestingly enough none of the large tech companies behind this petition are publicizing it on their platforms. These organizations will have egg on their faces if they don’t act fast.

But the biggest tragedy if this campaign failed would be what it said about the American people. If one man’s Kickstarter to make potato salad can raise $55,000, but we can’t even get 1,000 signatures to fight government encryption, what does that say about us? 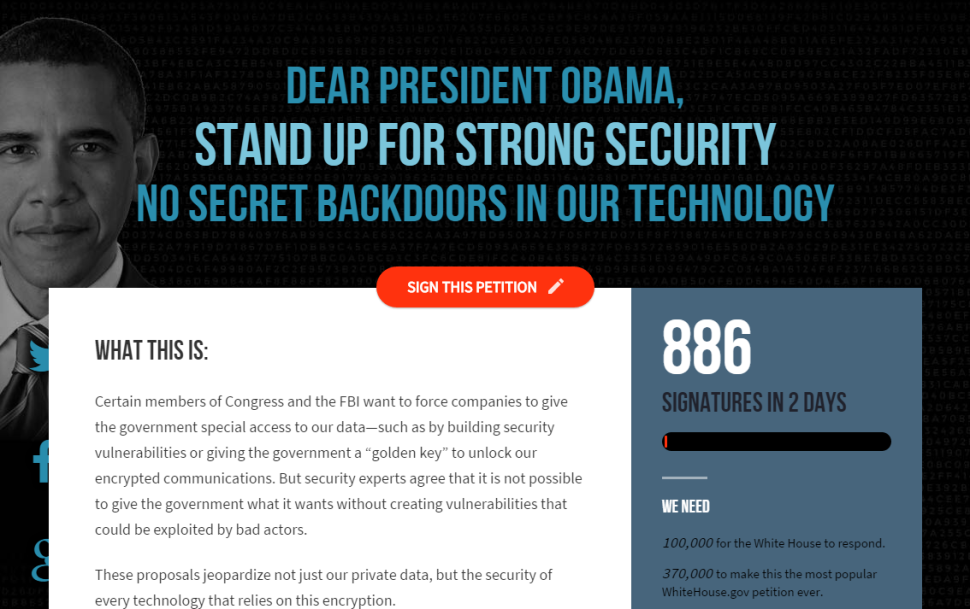