The text chimed as I was cooking dinner for my kids. It was from E, 12 years my junior, a nattily dressed, delicate-featured jazz musician and composer from a small town in Italy. He and I had spent one evening together: our first and only, as per both of our wishes. Over the course of our date, organized via the dating app Tinder, it became clear that he wanted a family, kids; I already have three kids and neither the desire nor the capacity to spawn more.

The problem was, we liked one another. Yes, my Italian is nonexistent, and his English had large holes where words should have been, but from the moment we sat down together for a predetermined half-hour drink that soon bled into a long dinner and postprandial walk, our connection—both intellectual and physical—was apparent. Both of us could sense that getting together again would turn our blind date into a relationship. Which would have been stupid.

Yes, all of this was discussed and dissected, out loud and without shame, before our clothes came off. That’s the beauty of dating at my age after two decades of marriage: there’s no bullshit. None whatsoever. We even discussed the fact that we would not have sex. We’d do other stuff. Take turns being kind to one another.

It was a fun night. It made the world less lonely, more joyful, if only for a few hours. At my age, mid-divorce, sometimes that’s the most you can hope for.

But now, a month later, he was breaking the rules. “How are you, Deborah?” read the text. My friends call me Deb. I found this amusing, that in some ways he knew me better than most, but in most ways he knew me not at all. “Before the end of the universe I would love another time in my life to have the privilege to share a bed with two smart and sexually vibrant women 🙂 I know it’s a lot to ask to the world. Just sharing with a smart woman. Hope you are doing well.”

To say I blushed would be like calling Old Faithful a lawn sprinkler. I was beet red, utterly nonplussed. I had no idea how to respond.

“Of course you do,” I said. He’s my third. It was not the first time an impossible school supply request came through at the 11th hour. Luckily, I would find one while walking the dog that night, in the trashcan outside my apartment building, after which I would return E’s text.

Before getting separated a year and a half earlier, I’d been with my ex since the dawn of the AIDS crisis. Let’s just say threesomes were just not part of any of my previous experiences. I also never thought I’d ever get divorced. But life throws us curveballs. Constantly. The key is learning how to respond to them with honesty and grace.

After a few more texts, however, it became clear that E expected me to procure the other woman. Ha! Hard as I wracked my brain, I could not come up with a single woman in my orbit—or even slightly outside my orbit—with whom I would have wanted to embark on such an adventure, much less asked.

Most of the dates I agree to go on, it should be noted, go nowhere. I’ve made a few friends this way, but some of the bad dates I’ve had were epically bad. There was the 50-something man who still lived with his mother; the tech executive who was so boring and narcissistic, after awhile, I stopped talking or listening. One man seemed intriguing on the surface until we got back to his apartment, which was so hideously filthy and piled with dirty dishes I took one look at the mess, apologized and walked out. The oddest date of all—I say this with absolute compassion for the man, whom I had to comfort through the ordeal—was the one that seemed to go well enough, until a foot-muscle spasm lifted his toe into the kind of permanent, painful, and unremitting erection my poor date was unable to achieve elsewhere.

Of course, it’s not all one-night stands, toe spasms and texts requesting help with sexual fantasies. I’ve been separated for long enough now to have both broken a man’s heart and to have had mine subsequently broken in return. I dated my first post-separation beau for a monogamous nine months, until it became achingly clear that I’d simply chosen another man-boy like my ex. He cried when we broke up. I felt awful. The next man was so perfect and appropriate—responsible, empathic, beautiful, talented, sexy, generous, playful and brilliant—I fell in love from the minute we sat down for our first date. Then I proceeded to systematically sabotage any chance of our future by not listening to his measured pleas to take things slowly. I still castigate myself over that one; still get choked up when I think of him or see him; still love him, no matter how hard I try not to.

Recently, I had a text exchange with J, a new man I’d met online. Seven years my senior, a sociology professor based in my city for the summer while helping his mother with his stepfather’s cancer, he seemed lovely in theory. But I was still shattered, plus I have little time to date, as my ex-spouse moved across the country, leaving me as sole provider and parent. (I refuse to bring men back to my apartment when the kids are with me, which is nearly 100 percent of the time.) I told J to meet me on a Sunday morning at 9 a.m. for a hike in woods near my apartment, before my children awoke. That morning, at around 7 a.m., the dog started begging to go out, so I texted him and asked if he could come earlier. He readily agreed. I wore my rattiest clothes and no makeup. I didn’t even shower. I’d basically given up.

He liked me anyway. I felt the same way. There was an ease to him, a lack of pretense and walls. He had a beautiful smile. He both listened and responded with openness and honesty.

The next night, he came to a show in which I was performing downtown, then took me out for a drink afterward. The night after that, he helped me cook dinner for a friend who was going through chemo. The night after that, after I was given another boatload of bad news—when you hit middle age, it becomes increasingly unusual not to get bad news—we broke through our burgeoning friendship and fell into each other’s arms.

It was healing. Beautiful. Full of kindness and love.

As I type this, my little one is away at camp, my eldest is working in L.A., my middle one is in Europe with friends and J is sitting next to me, working on his book. He’ll be hanging out in my empty nest for a week or two, maybe longer. We’ll see. For now, I’ve cleared two drawers in my dresser and a high shelf in my closet—which he, being a foot taller, can actually reach.

I feel happy. Grateful for his presence. At peace. Adored. At the end of the day, that’s not just the most a recently single mother in my position can hope for. It’s the best thing life holds. 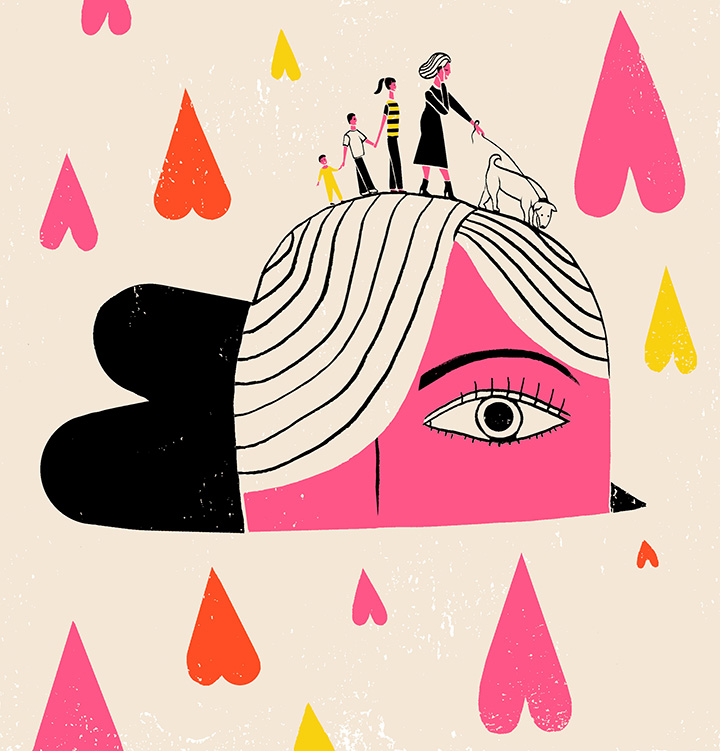