In the September issue of Harper’s, the London-based food critic and world-class troll Tanya Gold penned a screed against fine dining in New York. Her main point seemed to be that food wasn’t an appropriate site for creative expression. Apart from the fact that this overlong piece was a wholesale replication of an earlier philippic she’d written for the Guardian the year prior—that time focusing on London’s fine dining scene—Ms. Gold’s scold is fundamentally objectionable.

Of an elaborate permutation of turnip by chef Daniel Humm, at Eleven Madison Park, Ms. Gold writes, “A turnip, as you know, should be allowed to be a turnip; that is for the best. A turnip is a humble root vegetable, and should not be expected to close a Broadway musical, solve a financial crisis, or achieve self-consciousness through the application of technology.” In Ms. Gold’s view, the only proper role for a chef is to render product edible and the only value of food seems to be nutritional. To say this is narrow-minded and provincial is to be more Christian than I can muster. That a viewpoint so startlingly conservative should find its way into so liberal a rag only belies the fecal veil cast upon the intersection of ersatz class warfare, provincialism and a desire for pageviews.

Can food be art? I don’t see why not. It’s a medium, like any other. Simply because one cannot eat paint—though don’t tell that to my 2-year-old—and one can eat a sandwich does not mean the plate cannot be a canvas. Once liberated from Ms. Gold’s curmudgeonly elitism, the possibilities of food as art are unlimited. This, evidently, is the raison d’être behind pastry chef Dominique Ansel’s newest venture, an eight-seat, eight-course, all-dessert tasting menu experience called Unlimited Possibilities.

What unfolds in the second floor of his new bakery on Seventh Avenue is part performance art, part carnival and only partly successful. Mr. Ansel, creator of the Cronut, deserves high praise for the audacity of his vision. Though his path had been cleared by the creative machetes of Will Goldfarb (Room 4 Dessert) and Chika Tillman (Chikalicious), opening an $85 two-hour dessert-only concept is a high-wire act, indeed. Whereas Mr. Goldfarb relied on modernist technique to quantum leap his desserts, Mr. Ansel, who was once the executive pastry chef at Daniel, sticks largely to the French culinary canon but innovates in terms of concept and presentation. The menu, which he plans to change twice a year, is devoted to “Firsts.” Each of the six courses is meant to conjure an inaugural landmark: first word, first kiss, first job, first heartbreak.

The flaws of Unlimited Possibilities, however, start early. As we, the lucky eight of the approximately 5,600 who have applied to eat there, assemble in the amphitheater-like seating of the downstairs bakery, host Amy Ma welcomes us. Chef Dominique, we’re told, has something really special in store. We follow Ms. Ma up a steep flight of stairs to the door of the second floor kitchen, where she claims, “And now for the secret knock,” which consists of wrapping the corners of the door with one’s knuckles and then kneeing its center. Inside, a table hangs suspended by winch. “Chef Dominique,” she proudly declares, “devised the winching system himself.” The sweetness of U.P. was soured by this hagiographic exegesis.

As we were vociferously reminded, Chef Dominique wanted to offer us a unique and personal experience of Firsts. And it is true that our first words—mine being “Dada”—were made into yogurt meringues and served in a sweet pea crème anglaise with a moist carrot cake. “This is Chef Dominique’s play on peas-and-carrots! Isn’t it great?!” A difficult call to make, what with so many thumbs on the scale. But yes, as an opening salvo, it was a sweet first step.

Unfortunately, many of the Firsts were both cliché and, paradoxically, too specific; the dishes were precise but inaccurate, like a broken atomic clock. Take, for example, the second course: the “First Kiss.” Served in a conch-like porcelain bowl, the main feature of the dessert was the vessel it came in. “Chef Dominique chose rough vessels for the women and smooth vessels for the men,” we were told. “They are meant to remind you of cheeks.” Bringing the vessel to one’s lips, one sucks out the cream soda agar pearls floating in peanut while caressing the either stubbly or smooth cheek. But what’s to say my first kiss was with a woman, or even with a post-pubescent man? The couple next to us—two gay men—both received smooth bowls. Was it a catamitism Mr. Ansel was suggesting or simply blindness to the fact that not all first kisses are heterosexual?

Almost every course played on a trope that landed with a thud. “First Time Living Alone” came in a mini-skillet, looking like a portion of spaghetti carbonara, made of sliced up crepes with a sweet corn gelée and lemon zest “yolk” and toffee “pancetta.” Precise but, in my case, inaccurate. “First Job,” which was brilliantly presented as a bar graph, consisted of four bars: blue, green yellow, brown. Each represented, according to the key, an aspect of my first job: Blue, the smallest bar, represented sleep. Green, second highest, stood for taxes. Yellow, squat and soft, represented beer money, and brown, towering above the rest, stood for caffeine. Though the bars themselves were intriguing—especially the coffee crème bavaroise and the semi freddo malt—the concept was so far from a lived experience, and so presumptuous, the overall effect is alienation.

Even more troublingly, for a chef who avowedly set out to explode the world of desserts, Mr. Ansel remains startlingly uncurious about certain inherited notions of dessert. Namely, sweetness. Perhaps had he remained simply a Cronut-pusher, this would not have mattered. But when he is working serially, one wonders if it ever occurred to him to mitigate this aspect. He would have done well to question whether and how much sweetness is necessary. He might have looked beyond the French tradition to the Nordic lands, where the lines between sweet and savory are blurred. At UP, there are fantasias in creme, cantatas of chocolate, fugues of maceration. Each in isolation might be harmonious, but taken together, the eight courses are cloying cacophony. It’s a disappointing blind spot for an otherwise visionary chef.

Chefs deserve to be thought of as artists. Not all chefs, of course, but for those who aspire to such things, that avenue should not be blocked by provincial snobbism. Dominique Ansel certainly wants to be thought of as an artist. But if he plays in the same pools of performance art, he must be held to the same critical rigor. Sadly, if what happens on that second floor kitchen is art, it isn’t very good. Though the possibilities remain unlimited, their fulfillment, at this point, is unrealized. 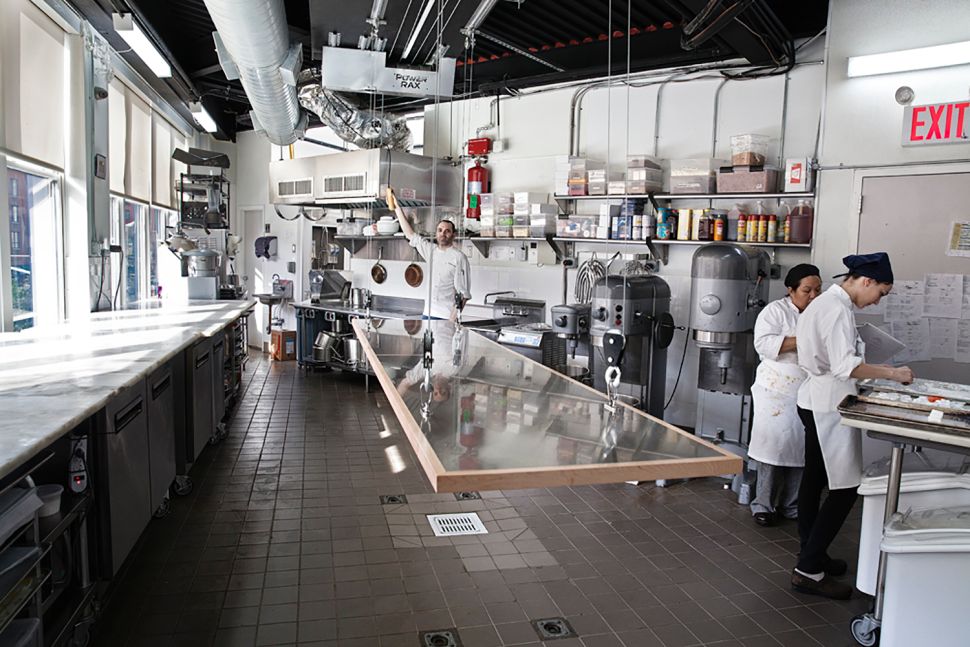