News of Mr. Beutner’s rumored termination was first reported by Politico’s Ken Doctor this morning and was confirmed by Mr. Beutner in a Facebook post this afternoon.

“I am writing to let you know that I am leaving the Los Angeles Times, effective immediately. I am not departing by choice, nor is this some ‘mutual agreement’ on my part and Tribune Publishing,” Mr. Beutner wrote. “Tribune Publishing has decided to fire me. I am sorry you will read this on social media, but I no longer have access to my Times email.”

Mr. Beutner, a former investment banker and deputy mayor of Los Angeles, took over as LA Times publisher a little over a year ago, just weeks after the Tribune Media, the company that owns the LA Times, spun off its newspaper division into a separately traded company.

“When I agreed to take this job, many people told me it was an impossible task. Why take on the challenge? For me, the choice was easy. I could not imagine Los Angeles without a vibrant LA Times. I still can’t,” Mr. Beutner wrote on Facebook today.

Mr. Beutner’s termination was a result of “lagging financial performance and a series of expensive executive hires seen by some as a prelude to a potential political run by the city’s former deputy mayor,” according to the Chicago Tribune.

Mr. Ryan, who had been the publisher of the Baltimore Sun since 2007, said in a statement that he is “committed to ensuring that these brands continue their legacy of world-class journalism and grow their already-significant voices to drive deeper engagement with consumers and marketers across all platforms.”

By this afternoon, the Los Angeles Times had already published a bio on its website for its new CEO and publisher. 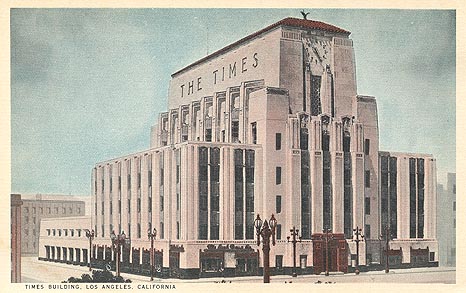