“We all know in Washington, that there’s a huge – “

Co-host Joe Scarborough cut him off.

“She didn’t tell the truth, Jonathan,” bulldozed Mr. Scarborough, a former Republican congressman. “Can you just say it the way it is?”

“No,” Mr. Capehart persisted. “Let me get this last point out. In Washington, we all know, there is a problem of over-classification . . . “

When Mr. Capehart finished, Mr. Scarborough said – among other things – “This is such a Clinton spin.”

Such clashes of political opinions – and the loud, continuous bluster of the highly-caffeinated Mr. Scarborough – are two reasons “Morning Joe” remains the bright sun of the wobbly solar system of MSNBC, the cable TV news network which was, until recently, the struggling, alternate universe to the powerful, right-wing constellation of FOX News Channel.

“M.J.” doesn’t draw MSNBC’s larger evening audience of the 9 p.m. “The Rachel Maddow Show” or the 7 p.m. “Hardball with Chris Matthews.” But as the network goes on an autumn offensive of more hard news and less opinion during the day, “M.J.” remains MSNBC’s signature presence and may soon become even more significant.

A network spokesperson said late Thursday that MSNBC had “no comment” on reports that “Morning Joe” soon will add one hour, ending at 10 a.m. instead of 9 a.m. while keeping its starting time of 6 a.m. This comes amid a flurry of personnel and programming changes at MSNBC, which trails FOX in almost all audience categories and considers CNN its primary cable news competition.

Brian Williams, ousted as host of “NBC Nightly News” for stretching a personal persona, soon returns to anchor the daytime MSNBC news operation. He might report on “M.J.,” according to Mike Weisman, the recently-hired “Executive in Charge” of the show.

Al Sharpton will leave his daily 6 p.m. show for a once-a-week Sunday morning window beginning at 8 a.m., when most TV viewers are still asleep or in church, (right, Rev?). Gone entirely are “Now with Alex Wagner,” “The Ed Show” with Ed Schultz and “The Cycle,” a daily panel of opining heads that included the wonderfully named commentators Krystal Ball and Toure’.

Thankfully, “M.J.” will continue to feature Mika Brzezinski, who often plays the role of the school marm in a classroom of Type A boys. Because Mr. Scarborough and other guests often cannot stop arguing, Ms. Brzezinski has mastered the technique of silent communication with the camera.

During Mr. Scarborough’s great gusts of middlebrow analysis, Ms. Brzezinski will arch a brow, roll an eyeball, wince, smile, frown and, on occasion, tilt her slender body slightly away from the larger Mr. Scarborough.

She is the daughter of a Democratic diplomat. He was a Gingrich-era Republican. They make a good pair, especially for the BOS-NY-WASH East Coast corridor where viewership is high and includes significant political and economic elites.

Mr. Weisman joked about how the age “demo” bought by advertisers usually tops out at 49 or 54. “A lot of people 50 and over are influential,” said Mr. Weisman, 65, who started at NBC as a page on Johnny Carson’s “Tonight” show when it was based in New York.

He called Ms. Brzezinski a “great counter-balance” to her co-host.

That’s easy to see and hear. When it’s time to restore order, Ms. Brzezinski will pick up her notes briskly, stare at the camera and change the subject by reading straight news in a stern voice. She runs the house without Daddy even really knowing it.

“She is not a shrinking violet,” Weisman told the Observer. “Her face registers ‘That’s B.S.’ without saying it.”

Weisman, who’s won 24 Emmys, most for sports, arrived six months ago at the request of Mr. Scarborough. He works alongside executive producer Alex Korson, in that role since 2011 after joining the show in 2008, its second year.

Mr. Korson told the Observer he admires Mr. Weisman’s “sensibility. He knows live broadcasting better than anyone. You ping ideas off him. He’s a great mentor.”

The essence of the show, Mr. Korson said, is that “It’s real and raw” with as many as a dozen guests. Most of the dialogue is unscripted. “The teleprompter is a crutch,” he said. “It’s our albatross. There’s no safety net.”

Both men spoke of the show as a blank canvas and Mr. Weisman gave an example. Former Vice-President Dick Cheney appeared with his daughter, Liz, Wednesday to plug his book and attack President Obama’s foreign policies, especially the Iran nuclear negotiations.

Mr. Weisman said he found Mr. Cheney intimidating at first but relaxed as they watched Secretary of State John Kerry appear shortly thereafter to attack much of what the Cheneys said. In that they were still there, Weisman wondered if Mr. Scarborough and Ms. Brzezinski might want them back on the set to continue the debate.

After serious consideration during a break, the hosts decided against it. “Joe and Mika have final decision,” Mr. Weisman said. “Your talent has to be comfortable.”

And there are light-hearted moments. On Thursday, the fellas yukked it up about a video of a fish spawning on the foot of a laughing President Obama in Alaska. “You guys can’t stop thinking about spawning,” Ms. Brzezinski said. “That’s your problem.”

Then they brought out Dr. Jen Welter of the Arizona Cardinals, the first female assistant coach in NFL history, who discussed New England’s “Deflategate” scandal from the Super Bowl.

“I am so sick and tired of everyone talking about Tom Brady’s balls,” Coach Welter said. 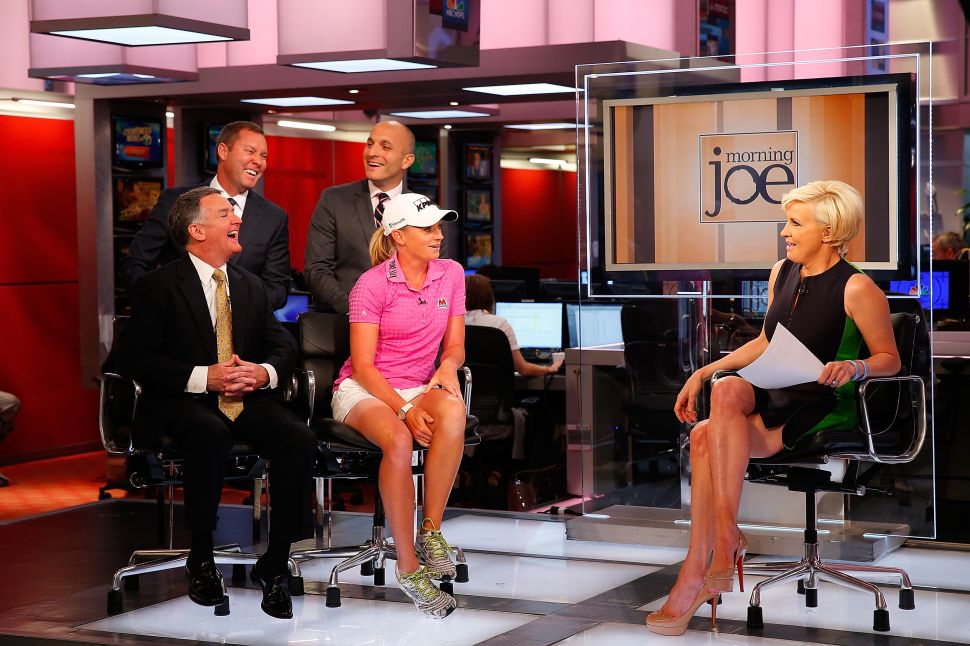