Second Avenue and 2nd Street, the center of city summer scents and sounds: rivulets of fragrant trash ; ululating sirens; as of May, the pleasant hubbub of patio dining. Rosie’s, which advertises authentic Mexican cuisine, is that and also yet another iteration of a restaurant helmed by a white chef mining the culinary traditions of our Southern neighbor for profit and gain.

But here’s the clincher: tremendously compelling food. Chef Marc Meyer, who with his partner Vicki Freeman owns Vic’s (né Five Points), Hundred Acres and Cookshop, admits he’s the least likely guy to be churning out delicately acidic Veracruz-style coctel de mariscos or tlacayos, flattened footballs of masa stuffed with nopales, hoja santa and fava beans made fresh by three Aztec women who occupy a comal in the center of the bustling dining room. “I was born in Hempstead, Long Island,” Mr. Meyers explains. “My grandparents on both sides are Eastern European. The food traditions were brisket and buckwheat.” But, he says, “Being a cook for as long as I’ve been, it is inevitable that you become close to people, and virtually everybody that I’ve worked with in the kitchen has been from Puebla state.” So what started as a snack brought in by a cook or busser turned into a family meal favorite, then a brunch menu item and now, a full-fledged restaurant.

Where would we marg-guzzling, guac-loving, mole admirers be without Mexican food? Cilantro-less, deprived the benediction of hoja santa, parched for mezcal. In other words, miserable. Rosie’s is just one of the latest splashy restaurants bringing the flavors of Mexico to New York. In no particular order, the names rush in: Black Ant and Gardënia, Cafe El Presidente and the Tacombi clan, the familia Fonda, the Empellon dynasty, Tijuana Picnic. And these are just the really outstanding ones. Many of them are helmed by Mexican-born chefs; some aren’t. Some traffic in authenticity, like Rosie’s; others are out doing their own thing. But all roads lead inevitably south of the Rio Grande.

Robert Sietsema, who writes about Bushwick taquerias in his book, New York in a Dozen Dishes, tells me the blossoming of high-ish-end Mexican is just one effect of a “movement that started in the 1980s, when a massive drought in Southern Mexico increased immigration from Pueblo and Guerrero.” Many of these immigrants found work in the city’s kitchens and in local bodegas where they began stocking Mexican ingredients like epazote, chiles and herbs like cilantro. Setting out hotplates, they began making their own tacos. Eventually, chefs like Alex Stupak and Danny Bowien (whose own ode to Mexican cuisine, Mission Cantina, has morphed into something entirely sui generis) became enamored and decided to make their own. The net result, says Mr. Sietsema, is that “this taco-fication of the city has ended with us willing to pay higher prices and enjoying modification.”

Higher prices, yes, but there is little in the way of modification at Rosie’s. Sure, in the mercados of Veracruz you might find oysters in the coctel de mariscos ($14) whereas on Second Avenue those bivalves have been supplanted by shrimp, squid, mussels and little chunks of avocado. But the flavors are there, down to the accompanying saltines. Throughout the rather sizeable menu, the home flavors thousands of Mexicans brought with them sing out. Mr. Meyer, whose many trips to Mexico were often at invitation of his Mexican colleagues, relies on the family recipes of Angel Andrade, his chef de cuisine, and the acuity of Chester Gerl, another CDC, to execute the complicated web of tastes embodied in the pollo en mole poblano, whose chocolate is flown in from Mexico especial. But for me, the chief charms of Rosie’s are found in the antojitosand five somewhat more substantial dishes. In the former category, there are tlacoyos, the masa flavor not lost under the cotija, translucent red-rimmed radish or gooey nopales. And in the latter, there’s a queso fundido, in which green poblano chiles have been drowned only to emerge from under a charred cheese blanket.

At Rosie’s, Mr. Meyer is obsessed with authenticity, and takes to it like Conrad did to English. But at Cosme, 20 blocks north, Enrique Olvera, who owns a restaurant in Mexico City called Pujol, couldn’t care less about what seems authentically Mexican. Cosme opened last October, and it is an ever-evolving thing. For this restaurant, newness and innovation are entirely independent from when it opened its doors. A lot of the brilliance that ends up on the plate, served under dramatic light in a cavernous restaurant whose tables’ succulents stand potted, is the result of Mr. Olvera’s relationship with his chefs de cuisine, Daniela Sotto-Innes and Mariana Villegas.

According to Ms. Sotto-Innes, Mr. Olvera will send a cryptic message on WhatsApp like, “Pea-pian,” which is a pun on the Guatamalan meat stew pepian. Ms. Sotto-Innes, knowing this is high season for peas, intuits he must mean to make a pepian with peas. And soon thereafter, that bright green puree, into which pumpkin seeds, chiles, almonds, onios and chiles are incorporated, appears under a fried soft shell crab, itself lurking under a tangle of pea shoots.

Like nearly everything at Cosme, the dish is a bright tangle of unexpected flavor. After a certain threshold of competency is passed, the art of cooking is no longer in the preparation of ingredients but in their contextualization. The crisp rich crab against the vegetal pea-pian is a good example. The swapping of cobia for pork and the transformation of traditional pineapple to a puree in a dish called cobia al pastor is further evidence of skillful détournement. An uni tostada seems like it is a kowtow to New York’s uni obsession. But if you’ve ever been to Cancun (and remember being there), you might know sea urchin aserizo de mar and a tostada as its natural home. 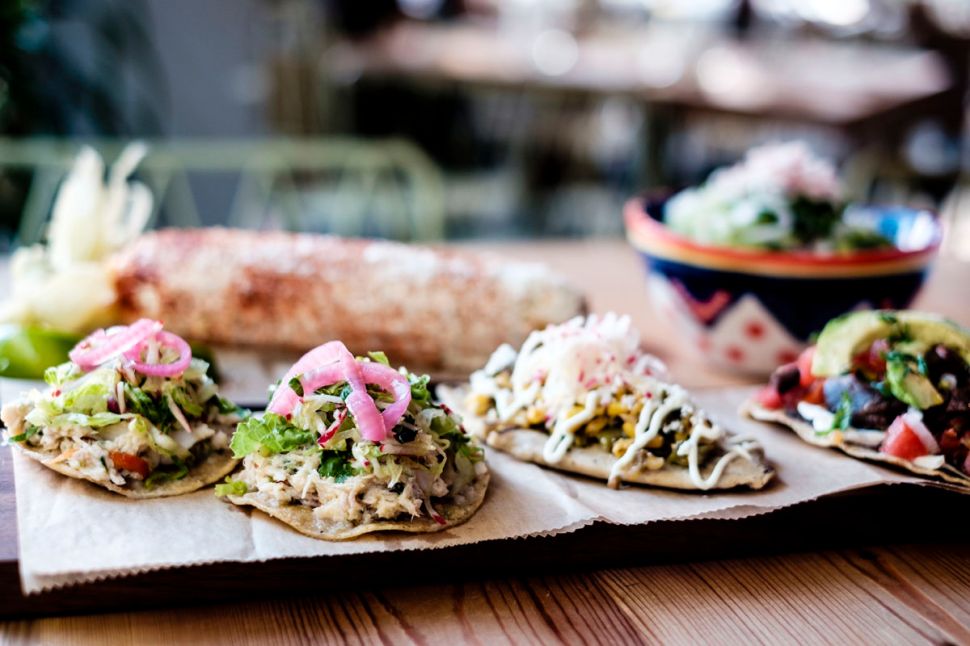