Welcome to the Italy of the southern hemisphere. Australia might not have a claim to be the cradle of the Western civilisation or the home of world-conquering fashion and cuisine, but in a very Latin mode she has just welcomed her fifth Prime Minister in just over five years.

If the political roller-coaster of the past half-decade is quite uncharacteristic of the stability that the British-invented and Australian-adopted Westminster system of government generally provides (in the past century, Australia’s three longest-serving Prime Ministers had governed for 18, 12 and 9 years respectively), the rise and fall of the five recent leaders has not just Italian but positively Roman echoes. Suetonius and Plutarch would have a ball chronicling Australia’s new Caesars with their spectacular elevations and bloody demises.

Australia woke up this morning with Members and Senators gathering at the Parliament House in Canberra for the start of yet another week of parliamentary business as usual, with the Liberal/National coalition government (the centre-right) trailing behind the Labor (the centre-left) opposition in opinion polls two years after the last election and year ahead of the next one. Australia is now going to sleep with a new Prime Minister, the Communications Minister Malcolm Turnbull having defeated the incumbent Tony Abbott by 54 votes to 44 in an extraordinary evening party caucus meeting that no one had foreseen even a few hours ago. As Ron Burgundy would say, that escalated quickly!

But the story really starts back in 2007, with the defeat of Australia’s second longest-serving Prime Minister, John Howard. Howard, a conservative’s conservative, had won four elections in a row, riding on the wave of steady and strong economic growth and sunny nationalism. Ever a confident cultural warrior, he took on the left-wing elites on behalf of Australia’s silent suburban majority; as George W Bush’s staunchest ally (he happened to be in Washington, DC on September 11) he eagerly participated in the Coalition of the Willing in Afghanistan and Iraq; and somewhere between all that he even managed to find the time to pay off government debt and secure Australia’s maritime border against people smugglers.

After nearly twelve years in power, Mr. Howard became a victim of his own success. The electorate, lulled into false sense of security by general prosperity, grew bored and restless, and in a fit of absent-mindedness replaced Mr. Howard with Labor’s Kevin Rudd. If Mr. Howard was a conservative’s conservative, Mr. Rudd was a nerd’s nerd. Somewhat of an outsider in the union-dominated Labor Party, Rudd was a former diplomat and a self-styled intellectual, but his appeal to the voters lay in his relative youth and novelty. He didn’t scare the horses; as steady as Mr. Howard (his campaign persona has been described as “Howard Lite”) but bursting with enthusiasm and fresh ideas, in contrast with the seemingly stale and exhausted Liberal/National government.

It’s safe to say that subsequently Mr. Rudd saw himself as somewhat of a John the Baptist to Barack Obama’s Messiah. He might have campaigned as an economic conservative to reassure the comfortable electorate, but with the first whiff of the global economic meltdown he transformed himself into a new-born apostle of neo-Keynesianism and a champion of international social democracy. It wasn’t however his economic polies, however questionable, that proved to be his downfall, but the ill-fated attempt to saddle Australia with an Emissions Trading Scheme at the height of the world-wide financial crisis.

When Mr. Rudd first proposed the ETS as Australia’s appeasement to the vengeful gods of climate change, he was one of the most popular prime ministers in the country’s history. It all looked like a slam-dunk, with the then opposition leader Malcolm Turnbull (in his first incarnation) throwing his support behind Rudd. It would be unfair to describe Mr. Turnbull as Australia’s Donald Trump, but he is a successful businessman (a Goldman Sachs alumni among others) with a humongous ego, abrasive personal style and a rather ambiguous relationship with his own party (rumours still circulate that Mr. Turnbull originally wanted to join the Labor Party). Ever on the moderate wing of the Liberal Party, Mr. Turnbull was committed to “doing something” about climate change. While he initially managed to carry the Liberal/National opposition with him, perhaps the biggest grass-roots political revolt in Australia’s history convinced enough Members and Senators that siding with Labor on ETS would tear the right apart. Toward the end of 2009, Mr. Turnbull lost the support of the party caucus by one vote to the conservative’s choice, Tony Abbott. Mr. Abbott took the fight to Mr. Rudd and the populace quickly soured on the ETS, forcing Mr. Rudd to humiliatingly ditch it. It didn’t save Mr. Rudd; his popularity continued to dive, and in a bloody coup d’état in mid-2010 he was knifed in the back by his deputy, Julia Gillard.

Enter Prime Minister number 2. Ms. Gillard, a Welsh import with a far-left political past, became the first woman in Australia’s history to hold the position. A few months later, she managed to hold off against a reinvigorated Abbott-led opposition at a general election, though her new Labor government was a minority one, relying on the support of three independents.

Mr. Abbott, meanwhile continued to become the best opposition leader the Australian right has ever had. A committed Catholic and a vocal social conservative he was in many other ways an elusive figure. This former seminarian, amateur boxer, Rhodes scholar, journalist, enthusiastic triathlete, and volunteer fire-fighter however proved to be a dogged fighter. Ms. Gillard, meanwhile, floundered, beset by a string of policy misfires and a major broken promise not to introduce carbon tax as an alternative to the ETS. By mid-2013, with her popularity in the doldrums, she was down to overplaying her last card, accusing all critics of misogyny. In reality the problem was not that she was a woman, but that she was at best a very lacklustre Prime Minister.

And then the Labor Party did the unthinkable. Facing electoral annihilation, the left decided to bring back Kevin Rudd. It was a stunning act of revenge by Mr. Rudd and a huge gamble by his party. It didn’t work out. Prime Minister No. 3 lasted only three months. While he managed to claw back some support for the government in its dying days, he wasn’t able to stop the Abbott landslide, in part because by then the Australian electorate, which had once fallen in love with him, has discovered that behind the veneer of a harmless nerd hid an insufferable narcissist.

Tony Abbott became the Prime Minister No. 4 with a big parliamentary majority and a big promise. There were some initial successes, mostly in reversing some of Labor’s most unpopular policies – the carbon tax was scrapped and loose immigration laws tightened to stop the flow of illegal boat arrivals. Apart from that, the government seemed to drift, unable to face the biggest challenge of reining in the out-of-control spending and the legacy of sky-rocketing public debt bestowed by the profligate Labor. Mr. Abbott himself proved to be a controversial and polarising figure; unlike his predecessors he failed to genuinely connect with electorate, particularly the middle that swings the elections and that gave John Howard his four victories.

Despite the Rudd-Gillard-Rudd Labor government being perhaps the worst that Australia has ever seen, the Abbott government has consistently trailed the Labor opposition in opinion polls. A year away from the next election and facing defeat after just one term in office, the party caucus has spooked itself into doing exactly what it has criticised Labor for doing in 2010 and 2013 – knifing the sitting Prime Minister and denying the voters their say.

And so, Prime Minister No. 5 re-enters the stage with blood on his hands and a divided party only partially behind him. Malcolm Turnbull was a failure as an opposition leader; too out of tune with the more conservative party base, too trendy, too autocratic and not enough of a team player – all winning qualities in the world of business; less so in politics. Has he learned from his past mistakes? What will his Prime Ministership mean for Australia and for the rest of the world?

Mr. Turnbull is said to have reassured the right of the party that his days as a moderate adventurer are behind him. He is less of an ideological hawk than Mr. Abbott and more of a conventional foreign policy thinker. His biggest challenge, however—apart from winning new supporters from the centre without alienating the conservative base—is restarting much needed economic reforms and facing to the legacy of Labor’s economic vandalism. Australia badly needs a leader committed to free market, smaller government and lower taxes. But it also needs some stability. Will Mr. Turnbull deliver or will Australia by this time next year have her sixth Prime Minister in six years? As the Italians say, que sera sera.

Arthur Chrenkoff has worked in Australian politics and is the author of Night Trains. Follow him on Twitter @Thedailychrenk 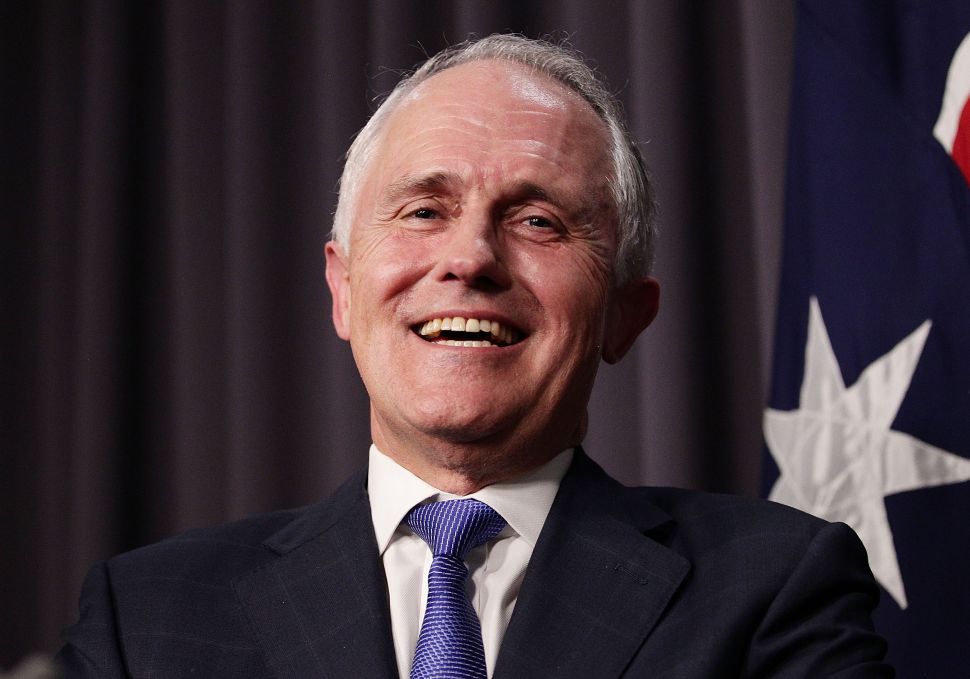