Congratulations! You’ve made it into college, and whether it was your first choice or your safety really doesn’t matter. Colleges are loath to admit this, but the “prestige” of the school has little to do with what you learn or even whether you get a job. The Chronicle of Higher Education published a 2012 study that found that college reputation is the least important factor in hiring recent graduates.

What you get out of a school is really up to you. But there are certain facts that many career placement neglect to communicate. In short, they are the informal “rules” that used to be conveyed, but are now sadly missing. They are real-world skills, and they will help you both be more “marketable” and probably happier.

These rules are gleaned from 30 years of hiring recent college graduates, mentoring them and sadly, sometimes firing them. When I first wrote about this in 1987 in Getting to the Right Job, many of the people I interviewed were just taking on their first managerial positions. Today they are CEOs of some of the country’s leading companies. And their updated advice, some of which that follows, is leavened by the advice they have given their own children.

1. Your college major makes no difference.

What you choose to study in college makes little difference in what you pursue as your career. Obviously some professions—medicine, law and accounting—need to be licensed. But professional graduate school and certification are different from undergraduate education.

The best hire I ever made was a young woman who had spent a year bumming around Asia after graduation. (She euphemistically called it “tutoring.”) She had majored in Russian literature, an area I had no knowledge of. But her major told me: this person is not afraid of taking on difficult challenges.

What you major in should reflect what you’re interested in—preferably passionate about—at this stage of your life. It should be both an area that you want to gain some substantive depth in, and a vehicle to develop essential critical thinking skills. You will learn the business of the business once you get on the job.

2. Grades count—but not as much as experience.

Yes, grades matter, to some extent, in getting into some graduate/professional schools. (Grades, particularly in organic chemistry, count far more for medical and dental school than they do for law school—where LSAT scores are disproportionally important.) But very few companies and organizations put a great deal of weight on GPA when making hiring decisions.

Not only does The Chronicle of Higher Education study make that clear, some of the very best, most selective organizations in the country make that point explicitly. One of our favorites is Teach for America. It is often cited that it is tougher to be selected for TFA than to get a job at Goldman Sachs. At TFA, there is a GPA cut-off of 2.5 (on a 4.0 scales.) But even that can be waived.

That is not to say that you shouldn’t try to do well in college. It means that your time would be better spent doing well and getting real-world work experiences. If that means getting a B+ rather than an A- but taking on a job or an internship, do it.

William Butler, chairman of the advertising agency Chiat/Day Perkins/Butler says, “I would rather hear that you swept floors for a dollar an hour than cured malaria as a summer intern or volunteer. Any real-world work experience is a plus. It demonstrates that you know what it means to work hard for money. Too many people don’t.”

There is not only a general consensus among us old folks that young people are not reading enough, but the data reinforces that perception. Book sales are down (including e-books;), plus newspaper and magazine circulations are off, as well. And the online readership of selected articles is not compensating for the decline in people actually paying for and reading publications.

The inference is that young people are not particularly well informed. They may have short-burst opinions or echo meme-popular slogans, but that is far different from reading long-form prose.

Now the flip side of the read, read, read advice: don’t do it while you’re supposed to be doing other things. Don’t be reading your phone when you’re in class, participating in a meeting or on a date. O.K., I don’t really care if you do it on a date; that is your date’s problem. But if you’re in a class I’m teaching I’ll warn you the first time and fail you for a second transgression. And if you’re in a meeting with me, I’ll know not to take you seriously: you’re not really paying attention to what other people are saying. Contrary to the much-hyped trope, people can’t multi-task.

‘Remember, if I am talking to you, I am as interested in hiring someone as you are in getting the job. Believe me, every time I interview someone, I look to the heavens and say, ‘please, let this be the one.’

Bruce Hallett is publisher of Playbill, and the longtime president of Time and Sports Illustrated magazines. When asked about what he looks for in new hires, his answer was unequivocal: “I look for curiosity. How broad is the candidate’s intellectual inquisitiveness and how deep?” And reading makes that possible.

Most people are terrible writers. And the worst role models are often academics. Consider, for example, this excerpt from the syllabus of a required freshman writing course at a well-known and respected college:

Lyric philosophy, disambiguating a deceitful idea about human omnipotence, simultaneously reconsolidating the power of the human, can engender poetics of social critique. Deploying the remixing approach, combining textual, audio and visual expressive modes, we will explore the themes in the light of the notion of the historicizable ahistorical. Between change and preservation, it constitutes the basis to draw from and build upon anew, thus rendering both tradition and contemporary cultural realities remixable. Neither lionizing an idealized past nor glorifying somnambulist projections into a romanticized future, low tech poetics, simultaneously, objects to ecstatic, euphoric sensationalism of instantaneity. Rather, it relies on creative/critical vernaculars recuperating the past, reimagining the future and resurrecting the present, thereby demonstrating the redemptive potential of the remix worshipping the wholesome sound of creation.

Sorry, I’m lost. And heaven help the poor students assigned to this teacher.

Back to writing: in most jobs you will have to write something, sometime. Whether it is a business plan, a presentation, an analysis or a recommendation, writing is important. You owe it to your boss, your colleagues and to any wider audience to be as clear as possible. Good writing takes practice, and that often means re-writing, re-writing and re-writing. It is not something most of us like to do. But it pays off. Start now.

A corollary: learn how to speak clearly. Aside from not mumbling, learn to speak in complete sentences. Also, resist the urge to refer to a potential employer as “dude.”

6. Lose the nose ring, cover the tats
and stow the attitude.

Every industry and profession has its own “uniform” and its own customs. Some are more indulgent of “outsiders” than others. And your particular talents may not just enable you to be the outlier but to be a trendsetter. But if your immediate objective is to get the job, acknowledge that an older executive or HR staffer may not be enamored by your body modification.

Again Bill Butler: “You need to impress me as someone who wants to work for my organization. That means you need to look good and comport yourself well. Most of us here (an advertising agency) dress casually. But if you want in, wear a suit when you come knocking. Similarly, talk to me, not to the ether. Look me in the eyes, tell me who you are, what you have done and what you can do for me. It’s O.K. to be nervous. I know that, so I will try to put you at ease. Remember, if I am talking to you, I am as interested in hiring someone as you are in getting the job. Believe me, every time I interview someone, I look to the heavens and say, ‘please, let this be the one.’ ”

Manners count, and they are in short supply. Remember to send thank-you notes to everyone you meet. (Old-fashioned, handwritten notes that require a stamp are so rare that they help you stand out from almost every other candidate.) But an email thank-you note is the bare minimum. Standing up when someone enters the room and waiting for others to sit down first are just (un)common courtesies.

Stephen Loffredo owned some of the hottest, best-reviewed restaurants in New York City, including the beloved Zoë in Soho, before becoming president of Seasoned Hospitality, a leading hotel and restaurant consultancy. Although a Culinary Institute of America graduate—and partial to CIA graduates—he utilized a very simple test to determine whether a person had that right combination of passion, drive and fit: he had them audition on the floor of one of his restaurants for a night or two.

“Too many recent graduates have spent too much time watching the Food Network,” said Mr. Loffredo. “They come in thinking they are ready to be the manager or sous chef; that they know everything they need to know. I want drive and the desire to excel, but I’m also looking for people who understand that they don’t have all the answers, that they are still learning.”

Everybody Googles everybody. Including job candidates. Companies will look at your Facebook page, your LinkedIn page and probably dig even deeper. They are deciding whether to make an investment in you. Don’t give them an excuse—much less a reason —not to.

Steve Cohen is an attorney at KDLM in New York, and the co-author of Getting In: The Zinch Guide to College Admissions and Financial Aid in the Digital Age. 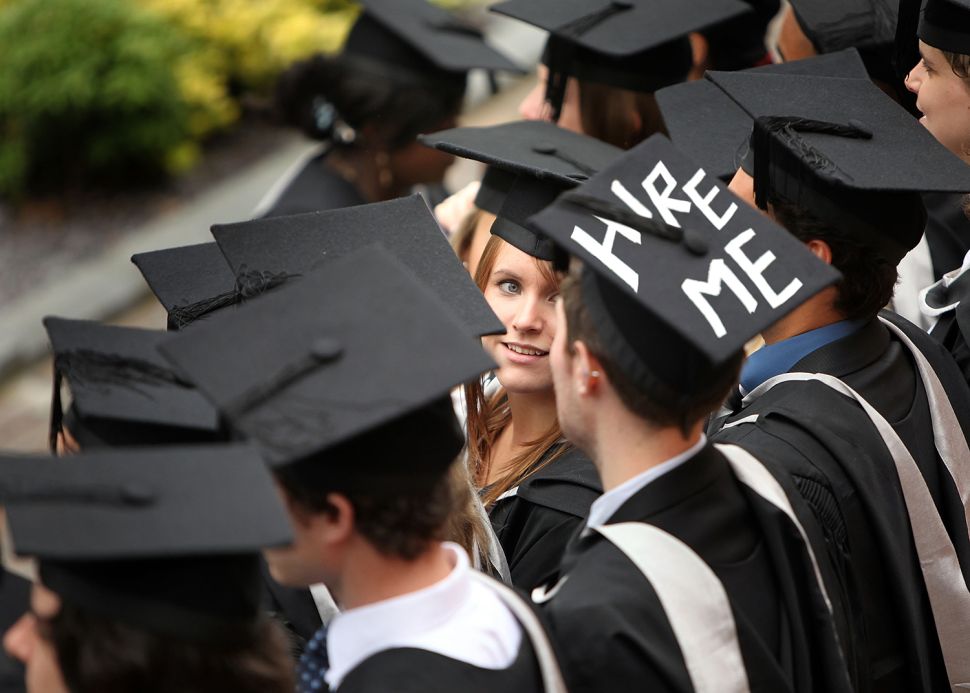