Hilliary Clinton is thankful for all the support she’s seen—so thankful, in fact, that she plans to personally thank some of her advocates.

Just how she’s planning to do this, though, remains unknown. All we know is that whatever she is gifting her supporters will arrive in a mystery box marked “The Official Clinton Campaign Thx Box.”

Meet "ThxBox"—a personal thank you from Hillary. Get on the waiting list to find out more: http://t.co/VOXlYiycaI pic.twitter.com/NntUpyTOgA

The tweet links to a page on her website where people can enter their email addresses in hopes of one day learning the contents of said mystery box.

Some Twitter users have already begun guessing, mostly with sarcasm:

@HillaryClinton Is that where all the wiped emails are stored?

@HillaryClinton a personal server for my bathroom?

@HillaryClinton I guessed what's in your bribe box there! pic.twitter.com/s5ar4uD862

@HillaryClinton I bet it's your prison uniform! 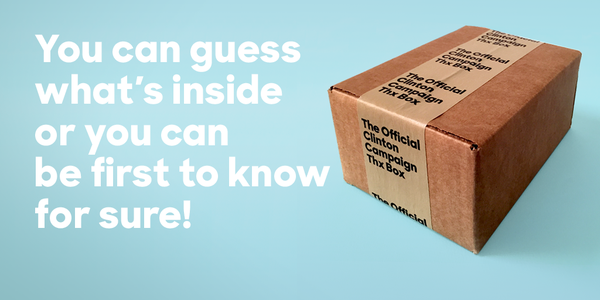