The 2013 election season, one of the more outré displays of democracy in New York City’s history, raised many questions.

Could Anthony Weiner really be our mayor? (No.) Could Eliot Spitzer really be our comptroller? (Almost, but no.) How did gawky, dad-joke-abusing Bill de Blasio get so many cool and famous friends? (Well…)

There was Susan Sarandon, the Academy Award-winning actress, telling women you “can’t just vote your vagina”–in other words, instructing them not to choose the only woman in the mayoral race, Christine Quinn, over the clearly superior male, Mr. de Blasio. There was Sex and the City star Cynthia Nixon, a relentless de Blasio surrogate, teaming with Ms. Sarandon at a “co-ops not condos” rally and later speaking at Mr. de Blasio’s inauguration. There was Steve Buscemi, the film and television star, popping in at the Southside Coffee Shop in Park Slope to phone bank for the mayor-to-be. Even Alec Baldwin, before he lobbed an anti-gay slur at a tabloid photographer, was on team de Blasio.

Yet almost two years into Mr. de Blasio’s tenure, especially as his popularity sags, Mr. de Blasio hasn’t leaned on celebrity surrogates as much to give him a boost in the public eye–at least, compared to his days on the campaign trail.

In his high-profile showdowns with Uber and Gov. Andrew Cuomo, for example, the mayor has kept his star powder dry. Star-studded press conferences don’t happen.

Celebrities haven’t been totally absent from the mayor’s orbit since 2013. The comedian Louis CK was spotted shadowing the mayor last month and even (maybe) called up WNYC to defend him. Mr. Buscemi has lent a helping hand at the annual “Inner Circle” show. Ms. Sarandon even cut a video endorsing Mr. de Blasio’s quest to renew mayoral control of public schools. The actor Alan Cumming wrote a letter to city officials urging the banning of horse-drawn carriages from city streets, something Mr. de Blasio supports. Ms. Nixon now serves on the board of advisers of the Mayor’s Fund to Advance New York City.

Some observers argue that stars can give a campaign sizzle, but Mr. de Blasio probably also understands there are limitations to what they can do for you after that.

“They’re not all that useful at this state of his development,” said Mr. Weiner. “When you’re trying to get attention, raise money and figure out how to break through, having famous friends, like chicken soup, can’t hurt.”

When Mr. de Blasio was a fledgling candidate in a crowded field, celebrity pals, indeed, didn’t hurt. With Mr. Weiner, who resigned from office following a sex scandal, hogging media oxygen and Ms. Quinn, the former City Council speaker, anointed the front-runner, Mr. de Blasio was regarded as an also-ran until August, a month before the 2013 primary. In the meantime, Ms. Nixon, Ms. Sarandon and Mr. Buscemi were hitting the campaign trail, giving the then-public advocate much needed credibility–and helping him raise money.

There’s not necessarily any correlation, however, between celebrity support and votes. Few single endorsements can automatically move voters to the polls.

“I’m not sure anyone wakes up and thinks, ‘I wonder what an actress on HBO series thinks about homeless policy,'” Mr. Weiner said.

New York City mayors have a long history of mingling with celebrities to burnish their profiles. Ed Koch campaigned with Bess Myerson, the former beauty queen, a pairing that some critics claimed existed solely to deflect rumors–which Koch long denied–that he was gay. Rudolph Giuliani campaigned with the comedian Jackie Mason, who drew fire in 1989 for using a Yiddish racial slur against David Dinkins, Mr. Giuliani’s opponent and the first black mayor. Years later, Mr. Giuliani would associate himself with the New York Yankees, the franchise dominating baseball in the latter half of the 1990s.

“I think celebrity endorsers helped de Blasio get elected. I don’t think they have helped him govern,” said Ken Frydman, a public relations consultant and former Giuliani aide. “Cynthia Nixon was instrumental in helping get him elected. She brought in women, gay women, women who care about celebrity.”

As mayor, Mr. de Blasio no longer needs the name recognition boost–he’s basically a celebrity himself–or help raising money. His cultivated veneer as a champion of the poor may not sync with time logged on the red carpet. Many of the outer borough, middle class voters who are giving the mayor the thumbs down probably wouldn’t appreciate the added glitz.

But Mike Morey, a Democratic consultant who worked for Ms. Quinn, said enlisting celebrity buddies to defend Mr. de Blasio on certain issues where there is a perceived weakness, like the rise in the city’s homeless population, could buoy him.

“If there’s a celebrity that has a reputation or caché in hunger or homelessness that could become a validator for him, that wouldn’t hurt,” Mr. Morey said.

That celebrity will be coming to the fore, said Karen Hinton, a spokeswoman for Mr. de Blasio. The mayor recently hobnobbed with Richard Gere, the acclaimed actor who is back in the spotlight after going undercover as a homeless man for his new film “Time Out of Mind.”

“The mayor and Richard Gere met to discuss homelessness, and we have plans for them to speak out about homelessness together in the future,” Ms. Hinton said.

In his recent public clash with Uber, the e-hail giant, Mr. de Blasio found himself on the wrong end of the celebrity calculus. In addition to running a slew of television ads that forced Mr. de Blasio to back away from his plan to cap the growth of their car fleets, Uber enlisted actors Neil Patrick Harris and Ashton Kutcher, along with model Kate Upton, to attack the mayor.

“.@BilldeBlasio Why do you want to return to days when only those in Midtown & Lower Manhattan could get a ride? #UberMovesNYC,” Ms. Upton tweeted in July.

During the great Uber war of 2015, Mr. de Blasio’s star pals fell silent. But Mr. Buscemi, in a recent interview with the Observer, defended his old Park Slope neighbor, arguing critics shouldn’t judge him so harshly just two years into his mayoralty.

“I believe in his progressive philosophy, and I think that he has implemented some good changes, but I am suspect of people who say that they look around and say that it is dirtier now, or it’s this, or it’s that,” he said. “It’s like not that much time has passed.”

This story has been updated to reflect that Mr. Hayes already did a robocall for Mr. de Blasio on September 5. 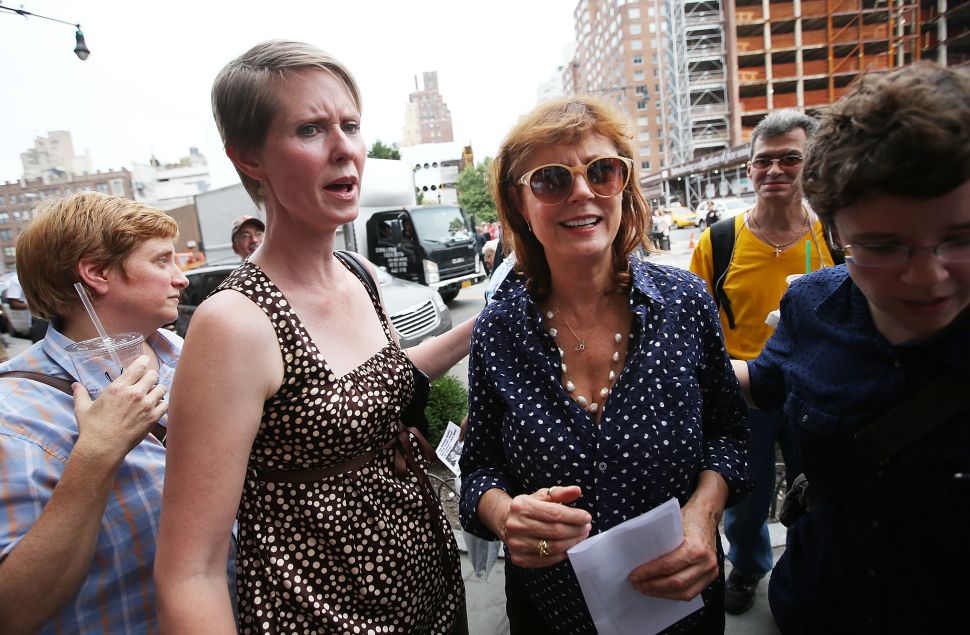