On the Ditto Press table I came across Canyon, by photographer Dan Wilton and writer Josh Jones. The two photographed and interviewed the mixed bag of Angelenos they encountered in Runyon Canyon. From “millionaire grannies” to “wannabe models” and “gangsters,” it offers a unique portrait of Los Angeles and its residents.

Earlier this summer, Vice spoke with Wilton and Jones about the project:

The idea for the book seems to be that this place is a rare example of somewhere where the vast social spectrum of the city mixes. What makes this so rare in LA? And how come the canyon works like this?

Josh Jones: That’s exactly what it is. We went up there just to see who we’d meet, and within 15 minutes we realized that this dusty mountain trail was full of people representing every single walk of life in the city. The thing that struck us was that all these people were mingling and chatting at the peak. Guys with grills and massive dogs were having pleasant chats with millionaire grannies in their visors and Cape Cod sweaters. Someone was telling us it’s one of the few places in the whole city you can let your dog off the lead, so I guess that’s why the dog walkers are up there—but I think it’s mainly because you can literally climb out of the city. The view is fantastic and it gets you out of the smog and traffic and constant shit that’s going on in people’s lives. It’s a total break from the electricity. It’s also one of the few absolute parts of nature that’s easily accessible for most Angelinos. But mainly it’s the view. The view’s pretty badass—when you can see it. 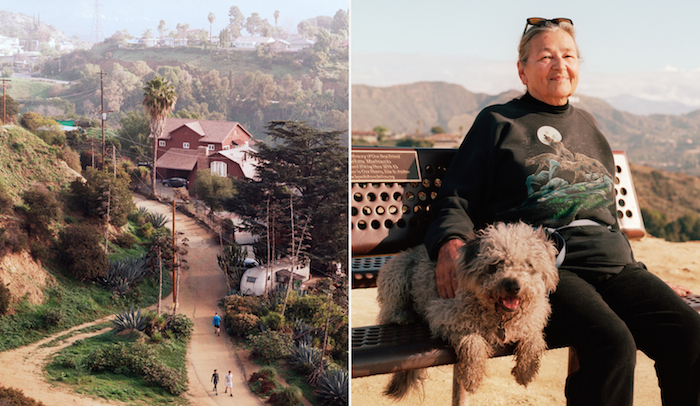