Ridding the world from poverty is far from a laidback affair, but for celebrities like Beyonce, Leonardo DiCaprio and Kerry Washington, the Global Citizen Festival was a chance to make an impact, while dressed in fun garb. These notable names were gathered on Central Park’s Great Lawn for the day-long event that was started by Coldplay’s Chris Martin.

The musical portion of the day saw Beyoncé pairing up with Ed Sheeran on a duet of “Drunk in Love,” while Coldplay and Ariana Grande teamed up on “Just a Little Bit of Your Heart.” Other headliners included Bono and Pearl Jam, but social advocates including Malala Yousafzai and Laverne Cox to petition for change. Vice President Joe Biden and Stephen Colbert were also on hand.

But how did these stars dress for the event? The black leather jacket made quite a few appearances; Olivia Wilde paired hers with a t-shirt supporting the event and a colorful Resort 2016 skirt from Mary Katrantzou. Meanwhile, we applaud Sophia Bush for spicing up her basic black leather with a touch of fun, in the form of a few patches, while Katie Holmes opted for an embossed style. Later during the evening, Kerry Washington even wore a Maje leather jacket over her little white Balenciaga dress.

While casual garb was mostly the go-to, there were a few outstanding dresses to applaud. Here, are our picks for the best dressed attendees at this weekend’s festival. 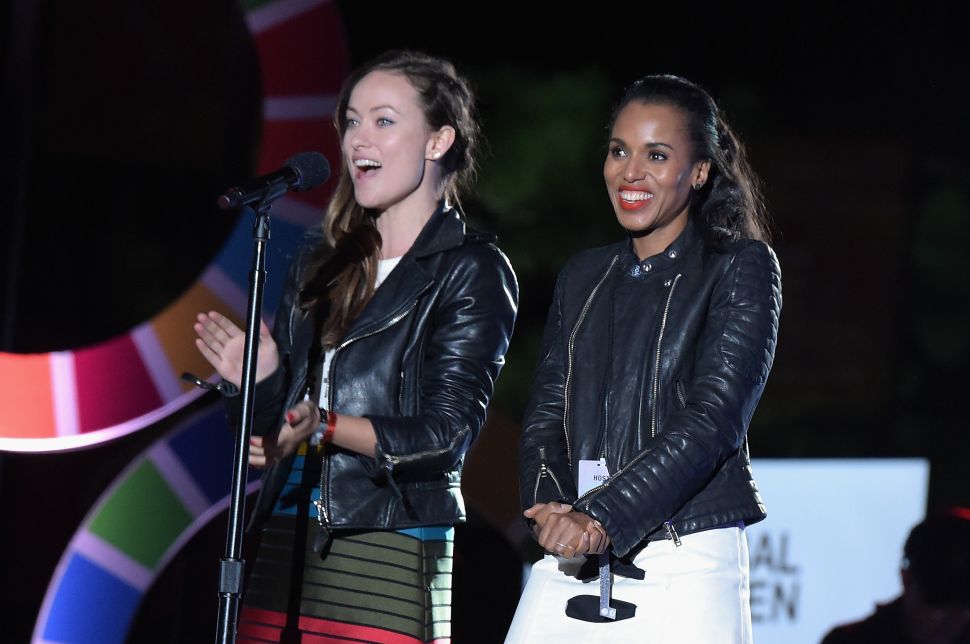