Mr. Zuckerberg has finally caved and Facebook will soon start testing a “dislike” button, or something very close to it.

But will you really be able to dislike something? It seems like these do-gooders are possibly considering an “empathy” button, so instead of actually hating something, you will have to empathize with someone who is bummed out after seeing something uncool.

C’est la vie. But what will the repercussions be for the hyper-sensitive contingency of contemporary art worlders? We decided to look at—you guessed it—Facebook to see what art-types were saying about it.

“Where’s my f@#king ‘dislike’ button? I want to start using it asap,” said British artist Tim Stoner in a recent post. This was just one of the many opinions expressed recently by artists hungry for an outlet for aesthetic criticism. Mr. Stoner garnered a tidy 40 “likes” for his frankness, and in the future, you could imagine him picking up his fair share of dislikes too.

But there is also trepidation about unleashing this beast of a button. “This could be awkward for Facebook,” responded a profile representing the Eagle Rock Artists, a coalition working in Wolverhampton, England. “Folk are likely to unfriend those who dislike a post of theirs. As everyone is highly likely to dislike at least one post out of all their friends, then everyone is going to end up with zero friends which makes Facebook rather pointless.”

It’s true–the Facebook to which we have grown accustomed could become a very different animal rather quickly if real “disliking” is allowed. Our current model is an ever-flowing river of polite promotion, a more or less “safe space” that encourages likes, shares and even commerce. Real ‘dislikes’ could ebb this steady flow of friendly branding, but, also, a real “dislike” is not so likely to happen–Facebook brass has been rather vague about what form the button will actually take.

“Some people have asked for a dislike button because they want to say, ‘That thing isn’t good.’ And that’s not something that we think is good for the world. So we’re not going to build that,” Mr. Zuckerberg said at the press conference regarding the forthcoming announcement about additional buttons. But he didn’t back off from the idea of a button that expresses dislike. (We’re not sure what the difference is).

What effect will this have on art world earning power? It is well known that Facebook (with some help from it’s younger, livelier brother Instagram) has helped to jolt the archaic art market into hyperspeed, forcing gallerists and artists to rethink how they sell and advertise. Entirely new social media and online analytics careers have exploded around the positioning-power of Facebook over its 11-year lifespan, so it’s not absurd to think that a button that many have lobbied for since the site began won’t have some kind of effect on art peddlers.

“As a gallery that uses a lot of social media, I’m not so happy about the new ‘dislike’ function for Facebook,” Milan-based art dealer Fabrizio Affronti of Brand New Gallery told the Observer via Facebook chat. “I think it could become something dangerous that people would use for vengeful or frivolous reasons. As it is now, if you like something on Facebook, you can press the ‘like’ button, and if you don’t like it, you simply ignore the post. But a ‘dislike’ could have a real and negative impact on your business.”

Mr. Affronti’s fears are understandable. Facebook has been a source of free advertising for years, with little to no risk of backlash. There is clearly a fear of that gravy train drying up, or at the least, morphing into something with a serious learning curve.

But could having the ability to dislike something that one of your “friends” posts actually be a good thing?

There are many ways a dislike button could benefit users. For instance, if you’re an artist who is contentious or provocative in nature, you could most likely find a brighter spotlight for art that beseeches debate. It’s also unlikely artists will find another widely used platform to share their work for free, so they’re unlikely to stop using Facebook altogether.

“I guess some artists, when faced with the choice of being ignored or disliked, may prefer the attention,” said Philadelphia-based artist Anthony Campuzano via the private confines of Facebook chat. “And some might prefer to use it to pile on their enemies.”

While that last statement might sound like an invitation for trolls to run rampant on people’s heartfelt creations, a dislike button—if crafted properly—could reintroduce users to something the art world, much like the political world, has been lacking for decades: civilized debate.

Will one button lead to a new golden era of art criticism? Let’s not get carried away, but a “dislike” would demand a deeper level of self-analysis and communication. Opposition, after all, begs for explanation.

“All Facebook buttons are there to be misused, no one wants to live in a world—in fact everyone should Dislike it—where everyone’s the same according to the requirements of consumer capitalism,” said the critic and painter Matthew Collings on his Facebook page recently.

Well, no one in the arts at least. 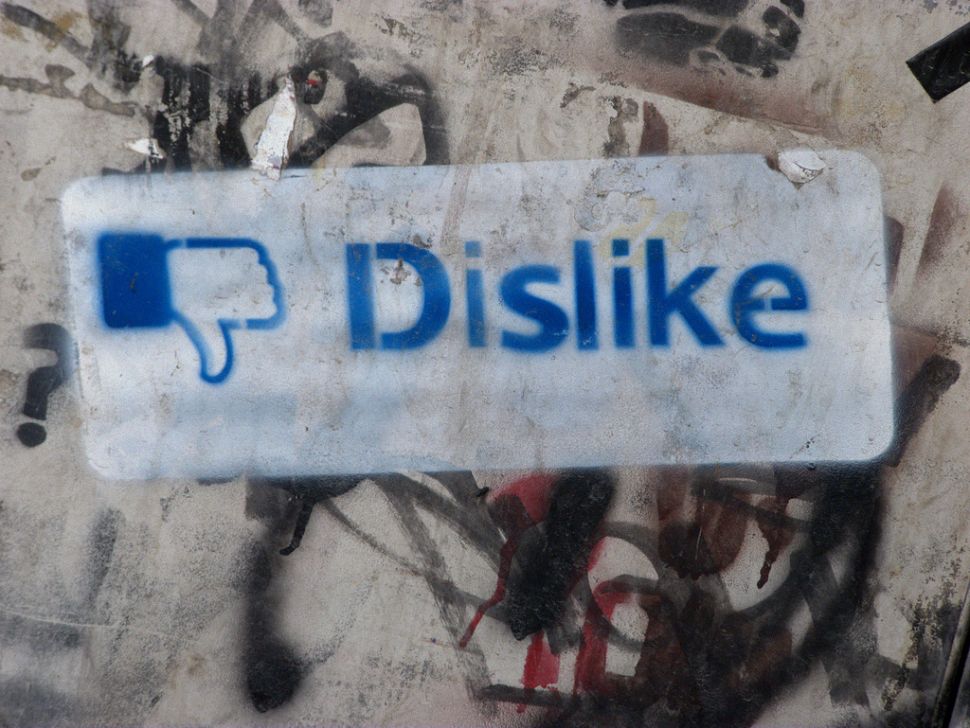