Sheri Barclay invited the Observer out to visit her Internet radio station, KPISS, which makes its home inside a mostly empty shipping container in an alley made of them, in the shadow of the elevated J train in Bushwick. There, she told us of her dream of building her radio station into a DJ-funded hub for unpacking the influences of hot new musicians. Outside, other cargo container entrepreneurs were shifting bikes back and forth and B.S.’ing on the makeshift stoop of another container storefront, across from the permanent looking Porta-Potty.

Ms. Barclay has also set up a new radio studio inside a startup broadcasting by telephone. She’s all Internet radio all the time these days.

A former party DJ, Ms. Barclay got kicked off a college radio station in Edmonton, Alberta, Canada, for antics that included convincing a listener to bring wine in for her and talking about drinking it on the air. She made her way back to New York City and couchsurfed until she found a job, which, as it happened, was all about Internet radio. She’s now working for Zeno Radio, which may be, she said, the number one source of radio for New York City taxi cabs.

Running someone else’s station by day and her own by night, she says, “I can never be banned because it’s my station,” she told us during a visit to the the cargo container that her station operates out of. Both through Zeno and KPISS, Ms. Barclay is working to give people new ways to get heard.

Zeno Radio operates under a model where radio stations globally can set up to broadcast over a phone number. For example, listeners call in to a phone number and can hear a radio station from Ghana or Haiti (two of the countries with the most listeners).

So why would anyone want to listen to radio through a phone number rather than the Internet? Simple: minutes aren’t data. Basically no one has unlimited data anymore, but unlimited minutes are available. So some people listen for hours and hours each day to radio back in their home country.

Meanwhile, Zeno earns income based on partnerships with rural telecoms who get a subsidy for providing services in hard to reach places, as this CNBC story explains.

Ms. Barclay has been brought in to help the company develop a new vertical, however: ZenoLive. They are getting into the business of facilitating live radio over the Internet (though each show can easily be published on its own website and turned into a podcast as well). She set up a studio in the company’s Midtown office and created Radio Cheri, the test bed for programming. She’s been training new broadcasters as they take on the service, to improve what comes out of it.

While Zeno isn’t the first company to get into facilitating broadcasting, it is betting on interactivity. Listeners to live shows will be able to call in to the show on their telephone, or directly through the Zeno Live player with a click.

Here’s what the ZenoLive player looks like. See the button in the lower right?

Ms. Barclay says she doesn’t know of another Internet radio service that has a call-in function built into its player.

For the host, guests that call in show up as a queue on their admin page. They can drag and drop whichever caller they want into their mix and let them join the conversation (or not).  If the listener is logged in as a ZenoLive user, then the host can see information about them before opting to let them on the broadcast.

When we first met Ms. Barclay at an agency party in Dumbo, she said that her new channel would be New York’s new East Village Radio. The famous station has been resurrected by Dash Radio.

“People want to know what indie bands like,” Ms. Barclay said, explaining why the station with a punk ethos has a sound that often veers pretty wildly away from what most people associate with punk. In fact, while we were there, she decided to give us a lesson in the finer points of Britpop on the air.

While she was born in Queens, Ms. Barclay has connections in Alberta and Israel. She spent her formative years in Canada. That Canadian connection may be why she’s already been able to bring some star power to the channel. One of its earliest broadcasts was DJ’ed by the girlfriend of indie rock It boy and Edmontonian Mac Demarco, Kiera McNally. Ms. McNally has 26,500 followers on Instagram. She calls her KPISS show K-Hole.

Ms. Barclay’s radio station is self and DJ-financed, which enables it to stay advertising free and also gives her DJs more of a sense of skin in the game. They pay $30 per month to have a show on the channel, and she makes it easy for them to download the show and use the recording any way they want once it’s done.

While the station has only been intermittently broadcasting live for a couple weeks, it’s about to launch a partnership with indie venue The Palisades to broadcast shows.

As we sat in the shipping container, DJ’ing largely from YouTube videos while we talked, she explained how she hopes to turn one wall into a small record store for vinyl and tapes from bands that stop by, and another wall into the tiniest art gallery in Brooklyn. Andy Animal, former Stalkers frontman and music festival promoter, stopped in to say hello. He’s been talking with Ms. Barclay about setting up a show on the station.  He’s also got a container in the alley he calls the Rat King Emporium, selling novelty items.

What seems to interest her the most is the way people interact with the channel. She said one Sunday morning she came down to the station and started doing a show. A guy wandered into the alley and started watching her broadcast through the glass. She showed him how to listen on his phone, and he sat there smoking cigarettes and listening. Eventually, she invited him inside and he told her about the drunken three-way he’d had the night before.

“There’s a kind of magic to KPISS,” she said. 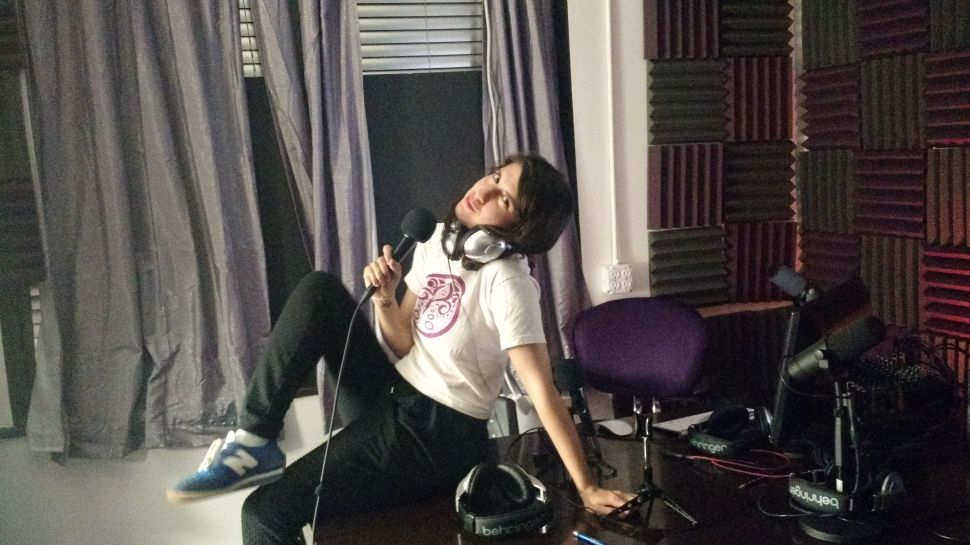