The GOP Presidential candidate—relegated to the “kids table” at the first Republican debate—is widely considered the winner of Wednesday’s second debate. Her numbers, while still relatively low compared to fellow anti-politician candidates Donald Trump and Ben Carson, have the potential to improve after her winning performance. Time will tell if Fiorina can keep her momentum going and capitalize on her debate success.

The former judge became the first woman and first Hispanic to take on the role of Hudson County Prosecutor this week. The room at her Thursday swearing-in ceremony was packed with elected officials including Speaker Vincent Prieto (D-32), Jersey City Mayor Steven Fulop, state Senator Nick Sacco (D-32) and state Senator Brian P. Stack (D-33), among many others.

The high-profile case accusing the Essex County Executive of misusing campaign funds is up for dismissal. A law requires two republicans and two democrats to vote on ELEC matters such as the one DiVincenzo is wrapped up in. There is no democrat currently involved, which probably saves DiVincenzo from further investigation.

On Thursday, the trial of Robert Menendez was pushed back for up to a year. He is currently facing indictment on charges that he accepted bribes. His trial was scheduled to begin next month. While the move does not get him off the hook, it does give him more time to build his case, strengthen important alliances and continue with efforts in New Jersey.

The New Jersey Democratic State Committee chair is making appearances for Democrats throughout the state. Last night, he attended a successful, well-attended fundraiser. With elections in a month and half, it seems that Currie is hoping to solidify Democratic victories across the state.

Former Congressman Anthony Weiner—most famous for a 2011 sexting scandal—is out of a job. According to POLITICO New Jersey, Weiner has been let go from NJ public relations firm MWW just two months after getting on board. He will supposedly be starting his own company.

Mayors Steve Fulop and Ras Baraka joined up this week to blast Verizon for what they perceive as withholding high-speed Internet access from low-income families. Verizon has yet to make a statement in response to the challenge.

Spiegel was sentenced to five years in prison for receiving payments of approximately $46,000 that were based on fraudulent invoices and receipts he submitted for reimbursement to the fire company and Upper Township Fire Commissioners. His son Jacob, who was also indicted in June, was admitted to a pre-trial intervention program.

On Tuesday, law firm Gibbons P.C. released their report on Stockton’s botched purchase of the former Showboat Casino in Atlantic City. While the University may have found a potential buyer, nothing is set in stone and now their dirty laundry on the deal is out for everyone to see.

On Thursday, a judge denied former assemblyman Edwards’ appeal to keep his deputy adviser job in the city of Orange. Edwards is allied with Orange mayor Dwayne Warren. Warren has some powerful enemies including Sen. Ray Lesniak.

This week, the entire state seems to be hovering in “loser” territory. A new study highlighted by NJ Watchdog claims that each New Jersey taxpayer would have to pay $52,300 in order to eliminate the state’s debt. New Jersey currently ranks as the worst state in the nation for state debt. 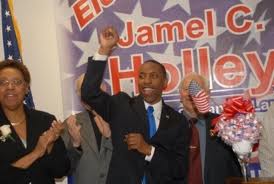