If the political gods would grant me one wish in the presidential campaign, it would be for Pope Francis to endorse his favored candidate for president. This wish, of course, will not be granted, but it is a useful question to consider for those of us who believe that Francis is one of the great men of the century.

I would recommend that all Americans who are concerned about the future leadership of America watch the tribute that Sen. Bernie Sanders (I-Vt.) recent offered to the pope on the Senate floor, which can be found here. In my view, the detailed praise offered to Francis by Mr. Sanders is the single best statement by any American political leader of what the faith and ideals of the pope would mean if translated to the day-to-day realities of American politics and governing. While the pope will not endorse any candidate in the election, the evidence in favor of the notion that Mr. Sanders would be the leading candidate if he did can be dramatized by the following views that they have in common.

First, they both believe that the world remains in a historical era of economic inequality and injustice caused by rampant financial greed and that the only remedy is systemic and far-reaching reform of financial institutions and economic policy. Francis has been profoundly detailed in his direct calls on political and government leaders to champion the reaching reforms that are a hallmark of his papacy.

Both the pope and Mr. Sanders believe that political, governmental, financial and media institutions should be directly challenged in the court of public opinion.

Second, Pope Francis and Mr. Sanders both believe in the teachings of Jesus and the great religions of the world that the poorest among us are blessed, that it should be the mission of the wealthiest to help the poorest, and the mission of politicians with power to fight for the poorest who lack power, except for those leaders who champion their cause.

It would be unthinkable in the value system of Pope Francis to impose cruel cuts in programs that help the poor, cuts that the U.S. Conference of Catholic Bishops and many religious denominations opposed while Republicans fought for them and too many Democrats acquiesced to them. Mr. Sanders has spent a political lifetime championing these programs.

Third, both the pope and Mr. Sanders believe that political, governmental, financial and media institutions should be directly challenged in the court of public opinion and the arena of political action in the pursuit of a just society. Francis has been astounding in the specificity of his criticisms of these institutions, including at times the institutions of the Catholic Church itself when he believes the church has fallen short, in the same way that Mr. Sanders has directly confronted political and financial elites and institutions with more fervor and greater detail in plans for change than any other candidate in either party.

Fourth, both Francis and Mr. Sanders believe that the earth, God’s creation, is endangered by the ravages of pollution which are caused—this is a key point emphasized by Mr. Sanders in his speeches and by Francis in his papal encyclical on climate change—by the financial greed of those who profit from pollution.

Fifth, Pope Francis and Bernie Sanders both represent powerful institutions, the Vatican and the United States Senate, but they both believe in the potential for transforming power of individuals acting together in common cause for higher values with grassroots action that can be called, in different but related ways, revolutionary.

Will Pope Francis endorse the Sanders candidacy? Of course not. Francis will not endorse any candidate.

There are many other examples of commonalities between the teachings of Pope Francis and the policies of Bernie Sanders. The four points that are emphasized here—egalitarian financial populism in the face of epochal financial greed, helping the poorest to survive against the cruel austerity of heartless policies, cogent and direct criticism of institutional power, and a recognition that financial greed not only promotes injustice but threatens the existence of the earth itself—are core principles of the papacy of Francis and the candidacy of Mr. Sanders.

What distinguishes Pope Francis from previous popes is not his theological teachings, which are consistent with previous popes, but his willingness to name names and directly challenge the institutions and power centers he names to accept a higher calling of social justice, fairness and equity across the landscape of secular life.

What distinguishes the presidential campaign of Mr. Sanders, similarly, is his willingness to directly confront what he considers, correctly in my view, the corruptions of modern institutional power centers that inevitably result in the unjust, unfair and inequitable policies he condemns and demands be changed.

Will Pope Francis endorse the Sanders candidacy? Of course not. Francis will not endorse any candidate. But Mr. Sanders is the only candidate in either party who could give the kind of speech praising Francis that I referenced above, with his sweeping critique of economic greed and his sweeping calls for powerful and fundamental change and reform.

When Francis arrives next week on American soil, the most popular public figure on the world stage will move the nation with his calls for financial equity and social justice, and no American politician will be cheering more loudly or smiling more broadly than Sen. Bernie Sanders of Vermont. 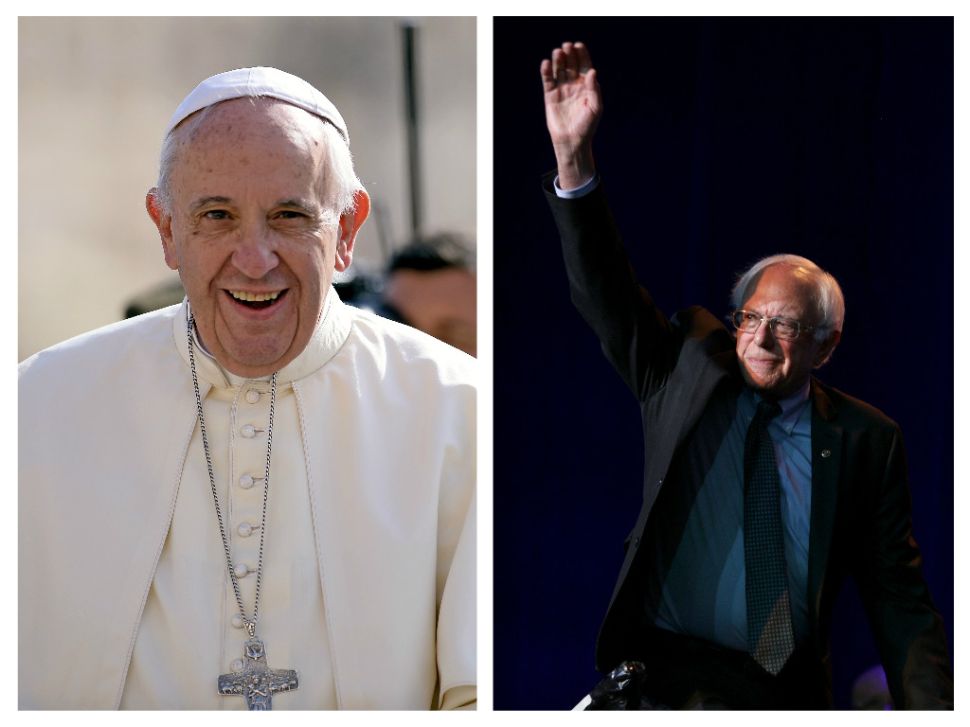