Most Sundays, Fareed Zakaria GPS on CNN plays on the junior varsity of political shows. This week, it reached the first string of the varsity with an interview of former President Bill Clinton, who defended his wife, Hillary, now running for the same office, also as a Democrat.

Mr. Clinton referred to a “full-scale, frontal assault” on his wife by Republicans and the media over emails from her time as secretary of state. Has she erased some? Has she kept some secret? Did she mix private and public messages on multiple servers? Inquiring conservatives want to know.

Mr. Clinton conceded that presidential politics “is a contact sport. They’re not giving the job away” and that “this email thing became the biggest story in the world” only because “the other party doesn’t want to run against her and, if they do, they’d like her as mangled as possible.”

He compared it to the Whitewater real estate investigation of the 1990s, during his presidency, which turned out to be less scandalous than his enemies had hoped.

Even though Mr. Clinton’s CNN comments were recorded Thursday and released on Saturday, the Sunday hosts had to reference the cable competition. One was Chuck Todd, who interviewed Ms. Clinton on NBC’s Meet the Press.

“I love my husband,” Ms. Clinton told Mr. Todd. “He does get upset when I am attacked. I totally get that.”

Another was Matthew Dowd on ABC’s This Week, who said the former president’s emergence was “a sure sign that Hillary Clinton is in trouble.” Donna Brazile, a colleague on the ABC show, discussed Ms. Clinton’s descent in the polls.

“She’s lost altitude,” Ms. Brazile said, “but she has a lot of attitude.”

This was hardly the only lively topic of the morning. On Meet the Press with Mr. Todd, Republican candidate Carly Fiorina doubled down on her smear of Planned Parenthood and refused to acknowledge that an anti-abortion video she touts has been doctored with a misleading image of a fetus.

“Are you willing to concede that you exaggerated?” Todd asked her.

She kept using forms of the word “butcher” and said Planned Parenthood is “harvesting the brains of fetuses.” Wearing a Fox News-style sleeveless red dress, Ms. Fiorina used her most authoritative CEO voice as she spaced her words and declared “This is something we must stand up and fight for.”

“The Bible says ‘Beware of false prophets,’” Mr. Boehner said. “There are people out there spreading noise.”

In further pandering to the conservative, right-wing base, which heavily influences primaries, Republican candidate Dr. Ben Carson told ABC’s Martha Raddatz he stood by his bigoted comments last week about not wanting a Muslim president.

“Do you assume all Muslims embrace Sharia law?” she asked him.

Dr. Carson said the tenants of Islam come from Sharia law, the Koran, the life of the Prophet Muhammad and the fatwahs of scholars.

“What I would like someone to show me is an approved Islamic text that opposes Sharia,” Dr. Carson said, adding—among other things—that Islam is against the rights of women and gay people.

Instead of asking a logical follow-up question—“Are you suggesting the Koran be rewritten?”—Ms. Raddatz interrupted Dr. Carson’s rambling answer and moved on to the next question, as she often does.

On CBS, John Dickerson’s “Face the Nation” led off with House Speaker John Boehner, who also spoke of “aborted fetuses that are born alive.” When asked about Republican Presidential candidate Senator Ted Cruz, Mr. Boehner referenced a previous comment in which he called Mr. Cruz a “jackass.”

But most of the interview was about Boehner’s resignation, announced Friday and effective at the end of October. The emotional Republican leader got choked up a couple times and pulled out his handkerchief, just as he did Thursday while in the presence of Pope Francis.

Much of Mr. Boehner’s frustration is not with Democrats but with militant Tea Party conservatives in his own party who have threatened to shut down the government over funding of Planned Parenthood.

“The Bible says ‘Beware of false prophets,’” Mr. Boehner said. “There are people out there spreading noise.”

That phrase—“false prophet”—has been used by right-wingers to describe the liberal and progressive attitudes of the Pope regarding climate change and immigration.

On “Fox News Sunday,” host Chris Wallace said the Pope “lectured” Congress (note the verb he chose) and Wallace devoted a scant two minutes late in his show to the Pontiff’s tour of the United States.

The token liberal on the Fox panel, Juan Williams, said “the Republican base is just out of sync with what the Pope has to say.”

Perhaps they should watch Mr. Zakaria, who opened his CNN show with a long commentary about the Holy Father and Christianity which challenged the self-righteous “religious right” which has acted in recent years as if it has a private email connection with God. 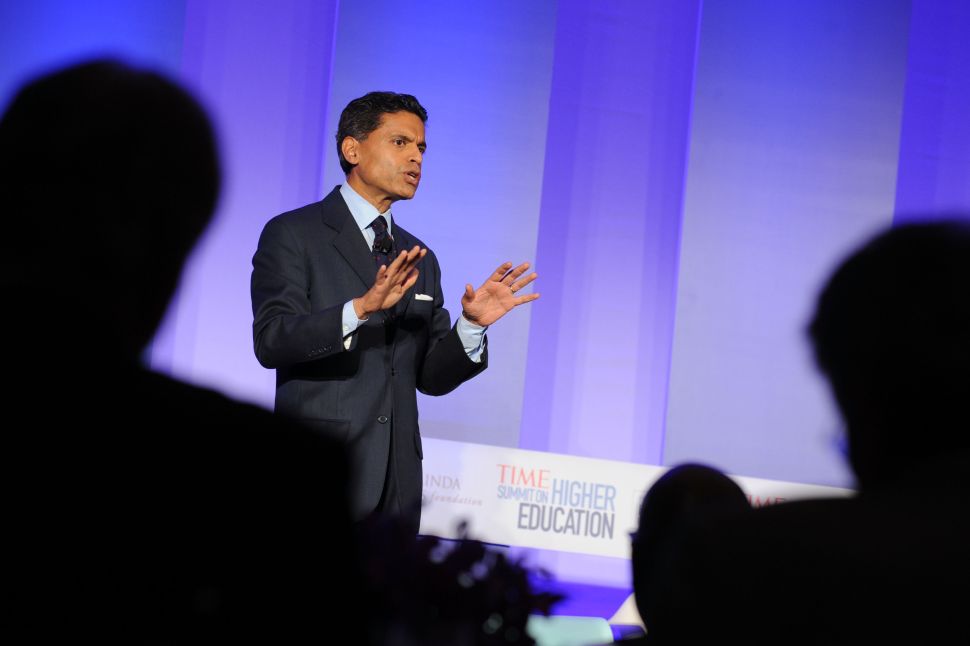