It is fair to say that Zoltan Takacs likes snakes more than they like him.

Snakes have tried to end his life too many times to count, but that hasn’t deterred him from traveling the world to extract their venom for research. A Hungarian-born herpetologist with a penchant for risk-taking, Mr. Takacs believes wholeheartedly in the medical advantages of using nature’s toxins to save lives.

That may seem counterintuitive, but Mr. Takacs, who holds a Ph.D. in pharmacology from Columbia University, is onto something. The venom of the pygmy rattlesnake, for instance, is used in certain antiplatelet drugs. But most of the estimated 20 million toxins available in the world are vastly underexplored, which is where this swashbuckling scientist steps in. Mr. Takacs, a former professor at the University of Chicago, is the founder of ToxinTech, a biomedical startup supported by private investments through which he is cataloguing venom, which he mostly extracts directly from the snakes’ hearts, in “toxin libraries,” as he calls them.

Mr. Takacs, who lives in Astoria, had recently returned from a snake-finding expedition in Brazil when he spoke before a packed room this week at The Explorers Club, on the Upper East Side. Rakish-looking, with an aquiline nose and mussed graying hair, he had on laceless leather shoes, flared jeans and a smooth button-down shirt—a far cry from his usual bushwear. Mr. Takacs has, by his count, traveled to 147 countries, including Fiji, Kenya, the Solomon Islands and Vietnam. He has jumped off boats to catch sea kraits in Palau and bagged bushmasters—the longest vipers in the world—on the border between Peru and Bolivia. “It’s a really nice snake,” he deadpanned.

Three of his snake-hunting friends have died from bites, and Mr. Takacs has almost joined them—though not all snake bites will kill you, he said, comparing each one to a car crash. In 2008, he nearly perished when a rear-fanged snake tried to murder him in the Amazon as he was doing fieldwork. He was rushed to the nearest hospital in Brazil, and the bite was, fortunately, treated. Mr. Takacs is allergic to anti-venom, which makes his excursions particularly perilous. “That was a close call,” he said.

It’s tempting to think of Mr. Takacs, 47, as a Steve Irwin type, given what may seem like reckless behavior—and probably is. Like Irwin, Mr. Takacs appears to enjoy the attention his exploits have brought him; he was named a National Geographic “emerging explorer” in 2010 and has been referred to as a “biomedical Indiana Jones.” But one gets the sense that he puts himself in danger simply because he loves snakes and thinks we should love them, too. Plus, snake catching is a primitive art, and Mr. Takacs needs to do it himself if he wants to advance his research.

“I find beauty and the unknown in nature completely,” Mr. Takacs, who has a thick Hungarian accent, told the Observer after his presentation, as he paced back and forth before a taxidermied cheetah in the Club’s fifth-floor trophy room. His restlessness seemed understandable: when you spend your days wrangling serpents in the farthest reaches of the world, a few minutes in a room full of unthreatening dead animals might make you uncomfortable.

Mr. Takacs was raised in Budapest, and his interest in herpetology was piqued during his childhood summers in Transylvania, catching and keeping reptiles. “I still have tissue samples from 1982,” he declared proudly. As to why he was attracted to snakes in the first place, Mr. Takacs shrugged. “I don’t know,” he said. “Basically, I can’t say something, so I don’t say anything.”

He is taciturn, too, when it comes to discussing his company. He wouldn’t reveal how many toxins he has catalogued, nor would he say where he is traveling to next, though he hinted that Africa was on the list. “We need a permit,” he said. While there are venomous snakes in the New York area—the timber rattlesnake, for one—Mr. Takacs doesn’t do much exploring in this neck of the woods. “It’s…busy,” he said.

On occasion, however, he does bring live snakes back to the city. “These are my fastest rides from JFK,” he said. “I tell the driver what’s in the box.” 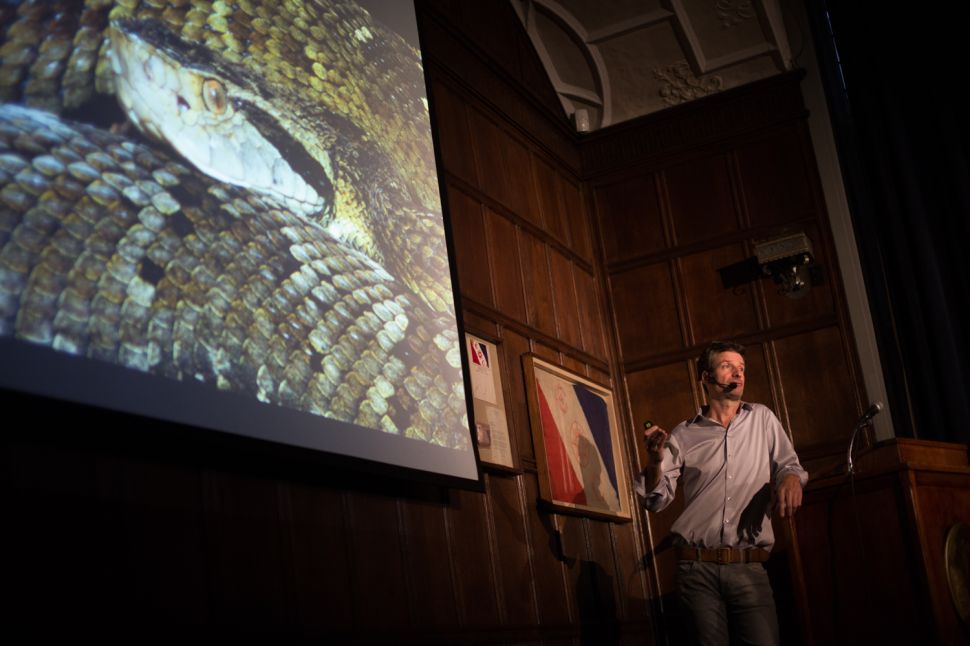