Spencer Platt vroomed up to the Flushing police academy on a gold-colored Kawasaki KLR 650 one bright morning last week. He wore a tan Vanson Leathers motorcycle jacket, jeans and a cream-colored helmet, which he immediately unstrapped, revealing a mop of long, oily hair. “Out here,” Mr. Platt said, “it’s like the outskirts of Kabul.”

He dismounted, slung a camera over each shoulder, one around his neck, and made his way into the complex. Mr. Platt, Getty Images’ longtime news photographer in New York and likely one of the agency’s most published staffers, is ever on the move. Inside the academy’s auditorium, he skulked about restlessly, snapping shots as Mayor Bill de Blasio swore in 750 police officers. He switched primarily between a 70-200-millimeter Canon EOS 1DX and a fixed 35-millimeter Fuji X100T, which he calls his “wannabe Leica.”

“Everyone shoots the same fucking cameras today,” he said.

Police Commissioner Bill Bratton approached the lectern. “There are eight and a half million New Yorkers in this city,” Mr. Bratton said, “and they need you, they want you.” Applause. Mr. Platt wasn’t listening. He knelt down, aimed his camera into the crowd, focused and clicked, clicked, clicked until the shutter fluttered like the wings of an insect.

“It’s kind of sad at times,” Mr. Platt said. He is 45, and resembles a cross between Tim Roth and Alan Cumming—if they’d just stepped out of a war zone. “Either you’re going to listen to the speech or you’re going to take the photo.”

Mr. Platt, a kind of renegade Bill Cunningham, has devoted his life to taking the photo. He has reported from Afghanistan, the Congo and Liberia. In 2006, in war-torn Lebanon, he shot a portrait of five young cosmopolitans touring the rubble of southern Beirut in a bright red Mini Cooper that won the World Press Photo of the year. “I have a very dark view of the past,” he said matter of factly. In 2012, he hightailed it to Newtown, Conn., right after the Sandy Hook Elementary School massacre. “When you cover a lot of that stuff, there’s no way to ever be happy,” he said. “It just weighs on you.”

Following the ceremony, Mr. Platt headed for East Williamsburg, the site of a shooting a couple days prior. As he motored his way down Northern Boulevard, a jet flew overhead from LaGuardia Airport. He looked up through his goggles. “This is a great place to shoot planes,” he remarked. He passed a cafe advertising a soccer game later in the day. Mr. Platt doesn’t care much for sports, save for cycling. “The highlight of my career was covering the Tour de France in 2010,” he said. The “flawed characters” fascinated him.

Mr. Platt got into photography in high school. He was captivated by the solemn photos he’d come across reading The New York Times. Back then, he said, the “forlorn” aesthetic of Henri Cartier-Bresson and Robert Frank—two major influences—had seeped into photojournalism. “It was a very oblique worldview, melancholy, jaded,” he explained. It was something the pessimist in him could get behind.

His first job took him to Ohio, where he worked for the Troy Daily News with his childhood friend from Connecticut, Tyler Hicks, now a staff photographer for the Times; as teenagers, they’d bonded over their mutual love of skateboarding. “We were just really rebellious,” Mr. Platt said.

He eventually got a staff position at the Gannett-owned Elmira Star-Gazette, but found himself bored by the drudgery of small-town journalism. So in the late ’90s, he took 12 days off work and flew to Albania to cover civil unrest that had resulted from disastrous Ponzi schemes. “Before I knew it, I was sitting in a Tirana hotel, terrified.” He returned to Elmira unscathed and put a story together for the paper; two months later, Life magazine asked to publish one of his photos. “Once that picture came out,” he said, “I got the hell out of Elmira.”

Mr. Platt, who lives in Windsor Terrace with his wife and daughter, doesn’t travel as much as he’d like to nowadays. When he started at Getty in 2001—his friend, the war photographer Chris Hondros, who died on assignment in Libya four years ago, got him the job—he’d spend half the year on the road. But today he was in for a surprise. His editors wanted him to go to Greece as soon as possible to cover the growing refugee crisis. Mr. Hicks had just published a photo from Athens on page one of that day’s Times, and the story was beckoning.

Mr. Platt took the assignment in stride. He had plans to take a trip up to Hudson for the weekend with his wife and daughter, but there was the possibility that he’d have to cancel them. So he hopped on his bike and sped off to an East Village pub, where, in a rare sedentary moment, he’d plan his trip to Europe. 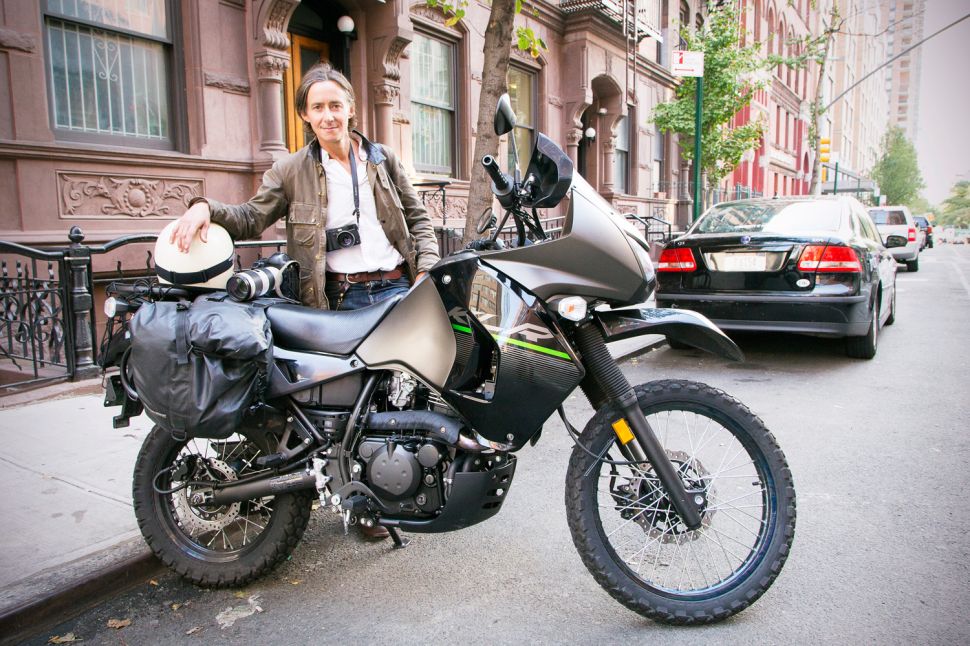