Everyone complains about how there is no great singing in opera anymore, but last week’s performances suggest that’s not so. The singing today is mostly fine; it’s everything else that’s the problem.

Sex and redemption were on the bill in a new operatic version of The Bonfire of the Vanities that played two nights at El Museo del Barrio over the weekend. Unfortunately, Michael Bergmann’s libretto bogged down in an inept attempt to recount every lurid incident of the Tom Wolfe novel it was based on, leaving characters undeveloped despite a running time of two and a half hours.

Stefania de Kenessey’s musical setting was, unlike a lot of contemporary opera, tuneful and grateful to the voice, but her score took the form of a series of short musical theater ditties. It came off like an Andrew Lloyd Webber show without an 11 o’clock number, neither art music nor compelling pop.

What this Bonfire did have going for it were some sizzling performances in its leading roles. Baritone Randal Turner snarled and groveled in a punishingly high tessitura as the headstrong bond trader Sherman McCoy, and Anne-Carolyn Bird floated a gossamer soprano as his long-suffering wife Judy.

Centering the show was Adrienne Danrich as the idealistic defense attorney Tamara Kilgore, her transcendent voice plunging to contralto-dark profundity and rocketing to high B-flats that would honor the triumphal scene of Aïda.

Richard Wagner’s opera Tannhäuser treats on some very profound themes: love, sex, sin, sacrifice, redemption and the artist’s role in society. If few of those big concepts resonated at Thursday night’s revival at the Met, the event certainly did get one thinking about other, more immediate issues.

During his first appearance of the season, Mr. Levine flapped his baton like a wounded bird.

In this grandiose 1845 tragedy, the medieval minstrel Tannhäuser has deserted the mortal world for Venus, the goddess of love. But nonstop sexual ecstasy has left him weary (or, perhaps, simply sore) and so he returns to reality, drawn by the pure love of the saintly Elisabeth. As penance for his misdeeds, he undertakes a pilgrimage to Rome, where the Pope denies him absolution. Meanwhile, Elisabeth has chosen death so she may personally intercede for him in Heaven.

Now just what’s on the page in this piece is a whole lot to unpack, particularly the notion that a dead virgin girlfriend trumps the Pope, which manages to be offensive to Catholics and feminists simultaneously. At the Met, though, it was hard to concentrate on this high-minded stuff with so much distraction in the foreground.

According to conventional wisdom, Tannhäuser is precisely the sort of attraction that should sell out the Met. It’s a classic that hasn’t been heard here for 11 years, so there should be pent-up demand. And the production is precisely of the style that conservative opera fans adore: lavish, literal and pictorial. (Even the theater’s trademark gold curtain—lately banished as a distraction from the stark visuals favored under Peter Gelb’s regime—unfurled in all its damask glory.)

The singers were all world-class, the chorus and orchestra were in superb form, and, most importantly of all, this was legendary Met music director James Levine’s first appearance of the season. Surprisingly, there were scores of empty seats on every level when the opera began, and numerous defections after each act.

Why? No one can say. It seems like people are just not going to the opera, and that’s terrifying for the Met’s future.

Even more chilling, though, was Mr. Levine’s performance. His was the strangest looking conducting I’ve ever seen, the baton in his right hand flapping like a wounded bird, and his left hand feverishly tracing random arabesques unrelated to the music. Somehow, the music hung together—just, though sudden changes of tempo seemed to leave the orchestra in disarray. The allegro flourish for woodwinds and strings that launched the first act finale sounded like a bad first attempt at sight-reading.

Yet Tannhäuser is, in general, a straightforward piece musically, infinitely less complex, for instance, than Alban Berg’s Lulu, a work Mr. Levine planned to conduct for the Met in November, then abruptly dropped from his schedule last week. All this, together with the maestro’s frail appearance on the podium, raises the concern of just how long his association with the Met—already in its 45th year—is likely to continue.

Difficult though it was to set these distractions aside, it was worth the effort, because this revival featured some of the finest Wagner performances in recent seasons. Baritone Peter Mattei not only sang the role of Tannhäuser’s devoted friend Wolfram with honeyed tone and a seemingly endless span of breath, he created so vital and touching a character that the finale of the opera suddenly took on a new meaning. The closing chorus about moral redemption was no longer only for the dead, but for the living Wolfram as well, as Mr. Mattei fell to his knees weeping in pious grief.

Though tenor Johan Botha offered only a rudimentary sketch of the title character’s dramatic angst, his firm, precise singing created a poetry all its own. Veteran Tannhäuser fans have come to expect the hero to lose his voice during the long and dramatic “Rome Narrative” aria in the third act, finishing the opera with nothing left but a croak. Mr. Botha, though, never ran out of gas. In fact, he kept a little extra power in reserve for the doomed man’s frantic pleas for Venus to return.

Soprano Eva-Maria Westbroek sounded significantly less steady vocally than her colleagues, with an unwieldy vibrato and raspy top notes—hardly what you’d expect of the virginal Elisabeth. But her phrasing and declamation of the text were majestic, the singing of an artist with a great soul. Her acting, if anything, surpassed Mr. Mattei’s, with a spellbinding slow exit in the final act that delineated precisely a saint’s serene passion. 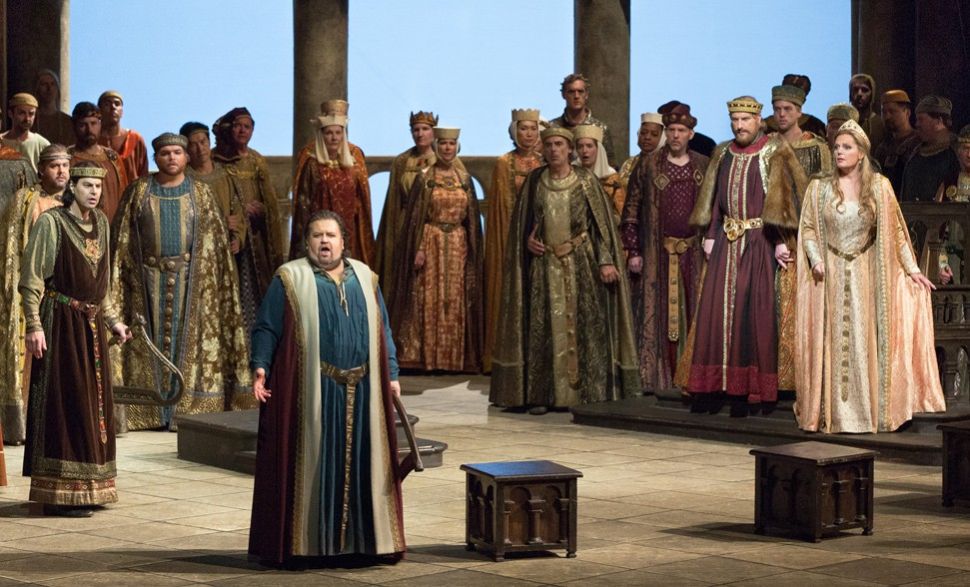