It’s October. October is like if one of the months was goth for some reason. I fucking love October. Trees are dying. Half of the internet is eating a pumpkin for breakfast, lunch, and dinner; the other half is furious about it. Sharknado is on TV 12 times a day. I love it. I don’t watch sports because they promote the exploitation of furries but there’s a sports concept called being a “fair weather fan.” I get this concept because I celebrate Halloween 12 months out of the year. On Valentine’s Day I go on a date with darkness. On September 11 I wear a costume to work. On my birthday I go to a restaurant and make the waiter sing “Last Caress” by the Misfits instead of Happy Birthday. I LOVE HALLOWEEN. What I’m saying is, I don’t watch regular shows during October. Hell I don’t really watch anything except zombie movies (love zombies btw) and Sharknado, but I managed to find a cool Netflix series you guys need to know about.

The Munsters is a show where Johnny Depp plays every character, much like Eddie Murphy in those Klump movies. He’s not listed in the credits for some reason but I know Johnny Depp when I see him. The Munsters is about a bunch of rockabilly tattoos that came to life and formed a family. Our leading man, Herman Munster, is a Frankenberry, or is he Dr. Frankenberry’s monster? I always get that backwards. Herman is the Charlie Sheen of the situation. He goes to work and mows the lawn and shit like that. His son Eddie is a werewolf like from Twilight and you better believe I’m #TeamEddie. Eddie is a ten year old boy with the widow’s peak of a divorced Uber driver from a world where Nicholas Cage is president. When Eddie grows up he’s gonna play the stand up bass and date women who belong to roller derby leagues and cut their own bangs. Eddie rules. Actually Johnny Depp doesn’t play every character because obviously Lily, the mother is played by Helena Bonham Carter. Lily Munster is what happens when a Suicide Girl grows up and becomes a Suicide Mom. She has King Buzzo hair and probably lets the kids drink at her house because “if they’re going to be drinking they should at least be doing it here under my supervision where it’s safe.” I’m pretty sure Herman and Lily met while his witchhouse band was playing at the same club as her burlesque troupe. Then there’s Grandpa Munster, who is clearly the “bazinga” element of the whole show. He’s old, he looks like a nazi political cartoon of Bernie Sanders, and he’s constantly making potions out of a bunch of crap from aisle 666 of Whole Foods. Lily and Grandpa are both Draculas. Finally there’s the central character, Marilyn, a teenager who chooses to identify as a non scary person and has to come to grips with the fact that she lives with a family of cis-spooky creepy crawlies. Very groundbreaking stuff.

The thing I love about The Munsters is that the writers don’t feel the need to use shock value by making ignorant jokes about race, religion, gender, society, history, math, politics, funny things, weight, animals, comedy, sexuality, life, shoes, or anything potentially problematic. Instead they stick to the greatest and only tool in the millennial comedic arsenal, PUNS. The “frayed knot” joke is basically my generation’s Richard Pryor—That [HUMAN BEING]’s Crazy. I’ve been doing an all pun set at The Clip Art Microphone Comedy Hoe Down (one of the hottest comedy open mics in NYC) and it’s been killing with my 3 friends that run the show and are the only audience that’s ever there. Puns rule and so does this show. The dialogue on The Munsters is basically like if every character was Arnold Schwarze[HUMAN BEING]’s Mr. Freeze character from Batman and Robin. It’s hilarious because it’s not good on purpose, just like my favorite movie Sharknado.

The episode plots tend to revolve around the Munster family’s struggle to assimilate, as a group of working class people that sexually identify as Garbage Pail Kids, into a suburb of southern California. For a moment when I was watching this show I thought it was the new season of Serial but then I realized that no one actually dies in these stories, which I like because portraying death in tv shows is offensive to people that know someone who knows someone who has died. So The Munsters is basically about a couple of vampires that never feed, a werewolf that never kills, and a Frankenstein that never destroys lab equipment upon realizing it’s own tragic existential brokenness. They just zip around town in a hearse listening to ska and helping their kids get through school. I enjoyed watching this show though, I haven’t had this much fun watching something in black and white since I accidentally rode my fixed gear onto the set of The Artist because I was trying to buy chickens from Chuck Klosterman in Farmville on my phone but I was still riding the bike and well you can see where this is going. I crashed into a craft services table and hummus went everywhere. Anyhow it’s October, get your Murder by Death records out, light some candles and watch this show, because it’s gonna be a whole year before getting plastered in a banana costume is socially acceptable again.  You can watch The Munsters on Netflix or you can fall asleep drunk with one earbud in while listening to Rob Zombie and I’m pretty sure this is what plays in your head.

Waiter: I got something to say / It is your birthday today

and it, doesn’t matter much to me as long as you’re fed

sweet birthday cake, I made this for you Jake 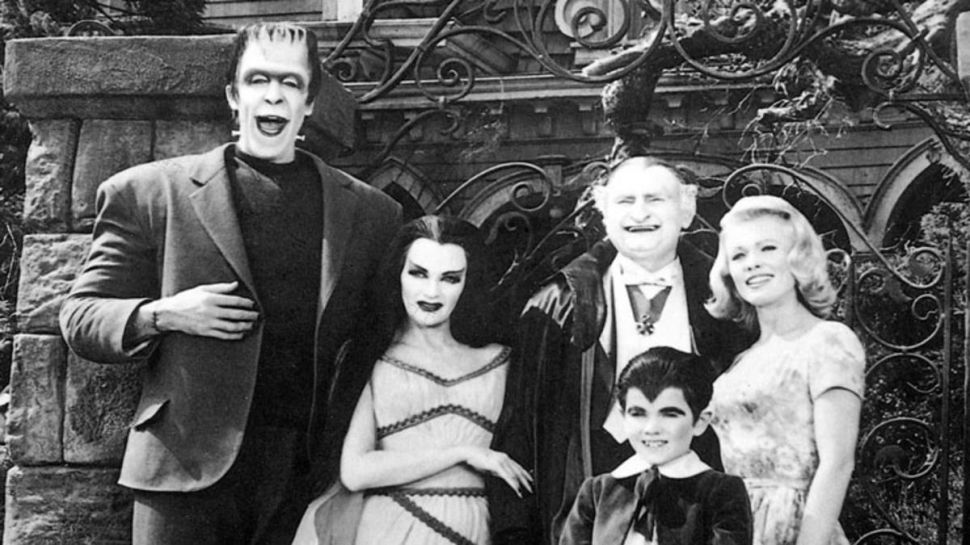